The 21st Century Through Mirror Sunglasses 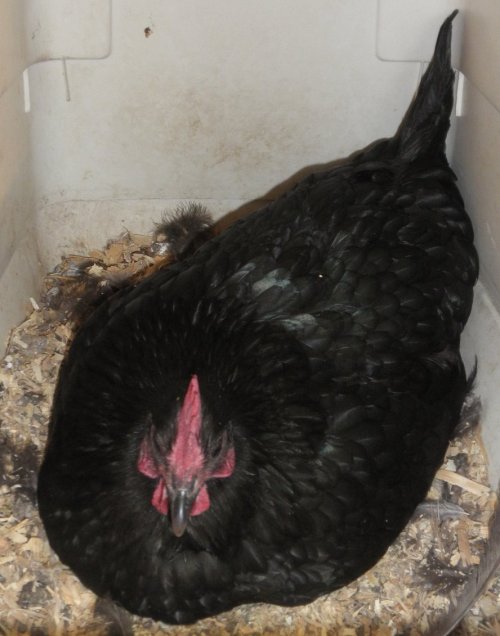 For six days this Australorp hen’s been sitting on a golf ball and two chalk eggs.  Every day I go out and rob the real eggs from under her, stroke her, talk to her, listen to her grumbles, whines, complaints, leaving that golf ball and the chalk eggs to give her something to hope for.

Highly-bred hens such as this one are somewhat similar to 21st Century human beings in some ways.  They’ve had almost all the instincts bred out of them in favor of, either producing a lot of chicken-meat in the least possible while, or producing as many eggs as their bodies allow.  Australorps hold the world record for the most eggs produced by a single hen during the span of a year.

So I’m prone to have a warm place in my heart for a hen when she goes broody, even though I don’t need any more chickens, don’t want any chicks.  It’s the mawkish sentimentality in me, I reckons.  I feel a lot of sympathy and tenderness for a hen trying her best to hatch clutch of eggs, even if the eggs are chalk and golf balls.

I try to simulate a pair of mirror sunglasses when I go out to lift her off the latest eggs, hers and those the other hens try to sneak in under her to give the species another microscopic shot at survival.

Those imaginary mirror sunglasses mightn’t be necessary to me to get through these final decades of my life, but they certainly make it easier to watch what’s going on around me.  Human beings sitting on golf balls and chalk eggs, allowing instincts to creep briefly into their behaviors occasionally, probably won’t hatch.  But it appeals to my mawkish sentimentality side and there’s no harm in it.

At least no harm that would be neutralized by me not indulging.

A creature pays his money and takes his chances this lifetime.  Even if the creature’s a hen and the eggs aren’t all they’re cracked up to be.

3 responses to “The 21st Century Through Mirror Sunglasses”