Curry fish for the Gods only 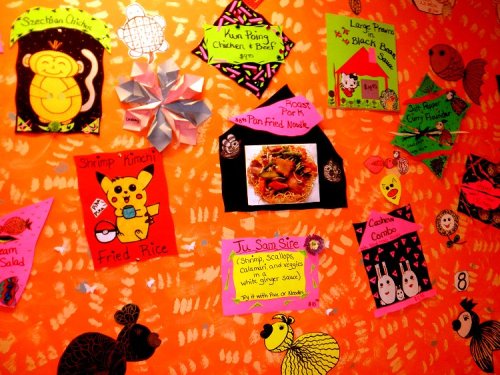 The pink haired, much pierced daughter of the Hong Kongish couple owning the Iron Horse [low sodium] Asian restaurant spent a year or more doing the menu-items on the walls and ceiling. Prices don’t change much and aren’t likely to, I’m thinking.

A person gets a hankering to eat someplace with storebought food occasionally, and if he does he can figure on getting a salt-load worthy of the Morton Girl.  Here in Olathe there’s a Chinese joint named the Iron Horse tries to breach the pattern, might even succeed except for the taste.  It’s not great, but they’ll swear there’s no added salt and no wossname monosodium glutamate.

But I gradually am coming to think I can’t afford to eat in food joints, and that they can’t make as good an Asian food as I can, and I know how much salt is in it.  Without having to listen and feel around for spots in front of my eyes or blind staggers.  Maybe if Chinese steel weren’t so lousy I’d be more prone to believe what’s said about the contents of food items.

Anyway, I was leading up to saying I made up the most toothsome stir-fry  curry dish without any salt at all last night, with steamed rice.  Gave Jeanne a taste before dumping it onto the rice.  A look of delight crossed her face briefly before she gasped, “Wow!” and ran for something to drink.

She’s of the opinion that all my years of loving habenero and other seasonings have left me bereft of taste buds.  Claimed she could feel that spoonful burning it’s way all the way down her goozle.

Being the best no-sodium Asian chef in Christiandom’s fairly nice, but I can’t find anyone else who can eat my creations.

9 responses to “Curry fish for the Gods only”