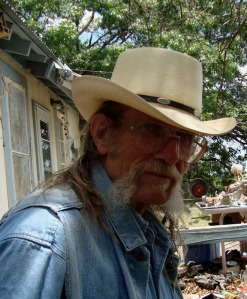 UPDATE: Note from Jeanne: Jack Purcell, aka “Old Jules” passed away in April of 2020. All subsequent posts are older reprints from other blogs he had or writings of his from other locations.

This blog is the reflections of a man late in life carrying a brain that’s travelled a seemingly impossible, certainly unlikely, and admittedly sometimes banal journey beginning during WWII and threading through the social experiment that was the last 69 years.

I’m sharing it with you because there’s almost no likelihood you’ll believe it.  I wouldn’t expect you to, you being who you are.

‘Poor New Mexico! So far from heaven, so close to Texas!’
Manuel Armijo,  Mexican governor of the territory of Nuevo México,  1841

New Mexico’s not so far from Texas today as it was in 1841.  Not even so far as it was in the 1950s when I was growing up in the New Mexico desert near the boundary between the two, so close to Texas the people further west referred to it as ‘Little Texas’.

“Little Texas” is a term that carries heavy baggage in a geography where Hispanics occupy the dominant ethnicity and settled it long enough ago to embrace cultural memories of conquering the place, snatching it from the people who lived there when they arrived, were driven out and slaughtered by the descendants of the earlier occupants, then re-conquered it after a decade-or-so.

The earthquake of self-image descending from Texans defeating Mexican forces on the battlefield at San Jacinto, the resulting Texan scorn toward ‘Mexicans’, followed by a long series of military and civilian armed invasions set the inevitable Hispanic views toward Texans in concrete, if not granite.

The irony of growing up in ‘Little Texas’ planted me firmly in schizoid territory of hating Texans and scorning Mexicans:  of being appalled to discover the county just to the west was named Chavez County.   Dumbfounded when some young friend came back from a trip to Las Cruces with the news, “They have MEXICAN cops over there!”  But frequently sitting in a barbershop listening to redneck farmers from Muleshoe, Herford and Plainview pronouncing self-stupidity in terms even a nine-year-old could recognize.

Schizoid began the journey and schizoid has always been there in the passenger seat pointing out the mile markers, the freeway exits, the next turns.

But it’s been interesting.  Possibly even unusual.

The Pilgrim:  Chapter 33 by Kris Kristofferson

See him wasted on the sidewalk in his jacket and his jeans
Wearin’ yesterday’s misfortunes like a smile
Once he had a future full of money, love, and dreams
Which he spent like they was goin’ outa style

He’s a poet, he’s a picker
He’s a prophet, he’s a pusher
He’s a pilgrim and a preacher, and a problem when he’s stoned
He’s a walkin’ contradiction, partly truth and partly fiction
Takin’ every wrong direction on his lonely way back home

He has tasted good and evil in your bedrooms and your bars
And he’s traded in tomorrow for today
Runnin’ from his devils, lord, and reachin’ for the stars
And losin’ all he’s loved along the way

But if this world keeps right on turnin’ for the better or the worse
And all he ever gets is older and around
From the rockin’ of the cradle to the rollin’ of the hearse
The goin’ up was worth the comin’ down.

My partner on this blog is Jeanne, whose contact info is under the Admin. tab.

Jeanne’s an old friend. She and her family had a cabin on the continental divide about a mile from me during Y2K. One day after Y2K didn’t happen and it was plain I was going to have to go back to town to live I was burning a lot of heavyweight stuff I’d hauled around all my life almost, and she showed up with her kids, saw what I was doing. She asked if, instead of burning it, they could take it. Tons of my early writing, the only manuscripts for several novels, all manner of things that would no longer exist.

For years Jeanne had been after me to start a blog and use some of those early writings and things I’ve written since, all of which she had copies of. But my slow connection makes it a time-consuming process and I simply wasn’t interested in spending my time that way. But when she got a high speed connection we talked about trying it that way, and a piece of what’s here is part of what she has stored. If I don’t feel like writing anything she drags something up from the past and posts it.

She also pulls things out of the mass of what she has and posts them on wossname, the thing people go to to connect, the name escapes me… another one of these Internet things. She posts short Ask Old Jules things frequently there.

Anyway, I’ve got more projects going on here than I can say grace over and I never intended to get as involved as I have in the blog. She was going to administer it and handle most of it and if I wanted to write something it would be here. Maybe sometime it will come to that. She’s got material enough to keep it going for years if I died today.