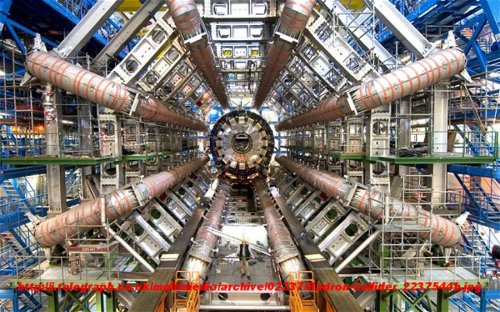 “Rolf-Dieter Heuer, director of CERN where the LHC is based, said he was confident that by the end of the year it will be possible to say whether the Higgs Boson, the particle which is responsible for giving mass to the universe, exists.

“The theoretical particle, nicknamed the God Particle due to its central role it has in explaining modern physics, has never been detected and scientists have been working for decades to prove its existence.

“Scientists hope that high energy collisions of particles in the 17 mile underground tunnel at CERN will finally allow them to create the conditions to allow them to spot the elusive Higgs Boson.

“Dr Heuer, who was speaking at the Hay Festival, said the LHC is scheduled to be closed down at the end of this year for up to two years in order to carry out upgrades that will increase its power and allow it to continue with more experiments.”

Those guys over at CERN need to think of something else to call themselves.  They’re inadvertently allowing their use of language to act as a confession booth.  “. . . scientists have been working for decades to prove its existence,” says just about everything needs saying about the difference between science and engineering.  Or whatever it is they think they’re doing.  “Got me a theory, now I’m going to PROVE it,”  ain’t science.  But the difference is too subtle to penetrate the ice surface those folks are skating on.

For several years now they’ve been bragging about creating ‘baby black holes’ that ‘dissolve’ [they say the little guys dissolve because they don’t know what the hell happened to them – spang lost track of them].  There’s a body of opinion among outcasts and heretics from the ‘science’ religion that some of what’s going on stands a shot at creating black holes that don’t do any vanishing.  Black holes, or something else nobody anticipated.

At CERN, though, they’re got things to prove and they’re not going to let anything stand in the way of proving it.  When a physicist somewhere raises his hand to suggest they mightn’t know what the hell’s going to come out of this or that, they shout him down.  “There’s an extremely LOW probability of it.”

Back before they detonated the A-bomb at the Trinity Site a group of the physicists there expressed similar concerns.  “We oughtn’t do this.  There’s a minute chance it will set fire the atmosphere of the planet.”

“Why hell, the probabilities for that are low.  How the hell can we know whether it will without TRYING it?”

So guess what!  Trinity didn’t set fire to the atmosphere.  All manner of other great things grew out of it, though.  Hiroshima, Nagasaki.  The Cold War.  Mutually Assured Destruction.  ICBMs.  Chernobyl, Three Mile Island, and a lot of potential today for more drama in the North Pacific centered around Japan.  Countless people born deformed downwind from the low-probabilities that became high-probabilities with Chernobyl.  Arms races all over the world and weapons of mass destruction used as an excuse to invade any country with something worth stealing.

The people at CERN are doing something they’re calling ‘science’, throwing up their hands calling it the innocent pursuit of knowledge, wanting to prove things.  Hopefully one of the things time will prove is they were right about those baby black holes dissolving instead of going into orbit around the sun.

Hopefully they’ll prove the human species wouldn’t have been better served hanging them upside down from lamp posts when they had the chance.