Naked City in the Sticks

Good morning readers. Thanks for coming by for a read this morning.

I’ve resisted posting a blog entry about this incident a couple of days now.  Felt I needed to allow it to settle in my mind enough to think calmly and clearly about it. 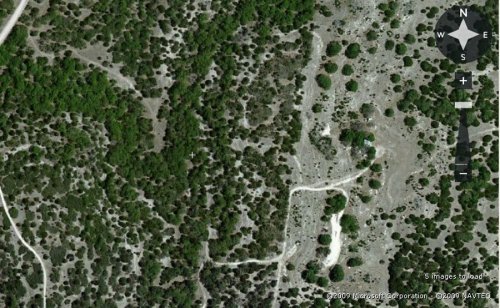 I’ve explained before that the nearest property line is almost 1/4 mile away from here.  No line-of-sight to the nearest dwellings.  Woods, rough roads and rough country between here and the nearest neighbor.  Aside from Gale, no reason whatever for anyone to be anywhere near here, and Gale rarely comes, never without honking his horn at the top of the hill. [That bluelike speck right-of-center in the pic is the roof of the cabin.  The barely-visible white loop’s the turnaround.]

Sooooo.  A couple of days ago I’d just finished my afternoon solar shower, poured a couple of gallons of water over my head for a soapdown shampoo and rinse out in the driveway.  Went inside to towel off and stepped back outdoors onto the porch to let the sun finish things off.

A cammie 4-wheeler with two people aboard was creeping by about 30 feet from the porch.  I jumped back inside to throw on some trousers and by the time I got back outside it was gone.  Not a sign of whomever I was wanting to throw rocks at and shout lectures about respecting property lines and the not-to-be-aspired-to human trait of nosy intrusion.

Because that 4 wheeler wasn’t coming down the driveway.  It came from the direction of the chicken house.  Nothing in that direction for another quarter-mile to the north property boundary fence.

Even though that new neighbor’s got 90-odd acres for himself and his family to fart around on knocking down trees and blasting away with every caliber firearm ever invented, 90 acres just isn’t big enough when a man’s richer than 18 inches up a bull’s ass.  Got rich early enough to get thinking he could run over everyone in reach, bluff whomever he couldn’t buy outright.

When he was coming down here trying to get me to go on wages working for him I had a vague suspicion this was the kind of thing he had in mind, ultimately.  Getting a leverage in place so’s he could do anything he pleased.  He’d already described every property and house within sight of here in enough detail to suggest he’d explored already what was none of his business.  Described it without blushing, as though it was a given.

Sometime during those visits he was making down here I asked permission to haul water from his well up beside the driveway, and he’d given permission.  His water’s nearer than Gale’s from here, and the road’s better.  I’d done it once already.

But after this incident I’ll be going back to hauling water from Gale’s.  And the only thing I’ve got to say to him about what happened the other day:

“Stay the hell away from this part of Gale’s property and keep the kids and grandkids away from it when they’re visiting.  One of the rare positive stereotypes about Texans is that they respect property lines.  Where the hell did you grow up?”

Says he reads this blog.  I hope he does.