It’s been a long century

June 28, 1914, the Coincidence Coordinators [CCs] finally got a belly full of a particularly venal form of aristocratic, dynastic and imperialistic exploitation of world populations.  They pulled the trigger on the first, Archduke Franz Ferdinand and his wife, and started a ball rolling that didn’t end until the Berlin Wall went down in the 1990s.  Maybe didn’t actually end then.

But one of the problems with WWI was nobody could figure out what it was all about, so they couldn’t pick a direction and head there, cut out all the middle men.  That’s why WWI didn’t end until the USSR packed up its tents and left eastern Europe all the way back to Moscow.  Told them all to go, and sin no more.  Here’s the keys to this stupid wall we built in Berlin.

Certainly the dynasties are still around because human beings are creatures of habit.  There are still Kennedys and Bushes and possibly a Roosevelt-or-two hanging around threatening to rear their ugly heads.  But the last Century killed off an amazing host of parasites with names such as Romanov, Hapsburg, Magyar, Hirohito, Stalin, to name a few.

The only WWI museum in the US, the National WWI Museum in KC, says that while they’re going to have a lot of special displays and ceremonies between June 22, and June 28, they aren’t celebrating.  Standard cliché of “There’s nothing to celebrate in war.”

In one sense they’re right.  Damned shame all those commoners had to die fighting wars for aristocrats.  But when you think about it, all those dead Romanovs, Magyars, Kennedys have given rise to some opportunities nobody’s likely to take advantage of.  But the opportunity is still there to hang the rest from lamp posts.

Didn’t do much long-term good when the French did it way back in the day, but maybe they weren’t thinking big enough.

Probably not, though.  This guy in the White House now might as well be named Bush or Kennedy for all the difference between him, them, and the ones named Clinton-was, and Clinton wannabe.

Maybe some black hand organization lurking around out in the bushes will rally around the flag, gather up all the Post Office workers, rooftop snipers and school killers and explain to them they’re killing the wrong people.

I expect if that doesn’t happen something equally appalling will, and I’m damned glad I’m not likely to have to try to live through it.  20th Century was a piece of cake from where I was sitting.

A Chief-Executive War Half-Century Before Vietnam

[They didn’t come back even when it was over, over there] 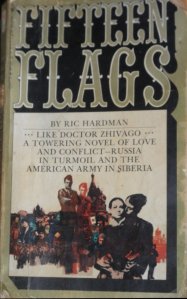 Sometimes we get lucky and a fiction work sets us off on a journey of discovery.  For me, this was such a work.  Fifteen Flags was a launchpad.

One of the defining events of the 20th Century was the Russian Revolution.  The International response, both in diplomacy and military intervention set the tone for the next seven decades of Soviet interactions with Europe and the US, and to a lesser degree, Japan.

I’d done a lot of reading years ago about the US troop involvement at the time of the Russo-Japanese War and  had a vague background of reading about the International forces guarding the railroads while the White Russians fought the Trotsky forces.  I even knew US forces were involved.

But what Ric Hardman managed to do with this tome was to broaden the scope of what happened there in my own perception enough to cause me to want to know more.  Hardman’s characters, whether they’re US troops, Japanese cooperating in the International venture to guard the railways, Chinese, Czech, or German POWs trying to survive being prisoners awaiting release in a time of military chaos and famine:  “Life is cheap.”

If I had to make a one sentence summary of this book, this set of events, this episode in world history I suppose no better words exist.

Book Reviews:
Do you enjoy reading reviews of books as a part of planning what you’d like to read?  Jeanne, the lady who administers this blog, is a library employee  in KS, and tells me about books, sometimes calls me when she’s picking through boxes of books in an auction parking lot waiting to be hauled to the dump after an auction, to find out if I’d like to own them.

But Jeanne also put me on to this newsletter library people evidently read:

Full of reviews of books soon to be published.

How to sell your war to the cannon fodder: