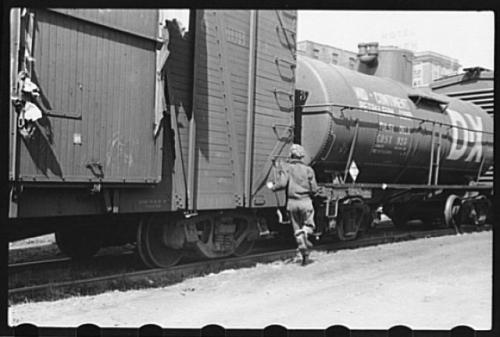 One of the the ways youngsters in Portales, New Mexico, used to entertain themselves summer days was hopping a freight train for a ride to Clovis, twenty miles away.  We’d hang around a while doing nothing, then hop another back to Portales.

Bums hanging around the Clovis yard would tell us which trains not to catch.  A kid wouldn’t want to be on a mile-a-minute diesel locomotive as it went through Portales and end up in Roswell, 90 miles west, wondering how to get home without the war department discovering what he’d been doing.

It wasn’t quite a decade later, summer, 1964, I was in NYC hanging around Greenwich Village thinking I was a beatnik.  I decided to head back to the desert Southwest.  The easiest way of getting out of the city appeared to be to hop a freight.  Seemed logical that any train I caught ought to be going South, or West, or Southwest.

Sometime after dark the train stopped at Rochester and and two cops had their pistols pointed at me.  Handcuffs, fingerprints, paperwork, and off to the slammer.  Rochester, New York, awaiting an arraignment so’s they could decide whether to charge me with the NY felony of riding freight trains and send me off to the pen two-to-five years.

That Rochester jail was the first place I ever heard the phrase, ‘riding the rap’.  Prisoners used it to describe what happens when you’re caught (the rap) and sentenced (serving your time – riding it).

Considering how frequently we humans are wrong about almost everything, and how seldom we’re right, it’s a mystery.  We go to sooo much trouble convincing ourselves we’re right.  Once we adopt an opinion about how things are, we hang onto it with hair,  teeth, and toenails and ride it.

At the beginning of the 20th Century a consortium of top-scientists announced to that all the major discoveries science would ever make had already been made.  Human beings all over the world believed them.  They’ve continued patting themselves on the back from then until now.  The airplane, the atomic bombs, moon landings, plastic, computers, tubeless tires, television,  and quantum physics were just tying up loose ends.

In our personal lives this brave new century is a time to pick something safe, something that will stay on the rails.  Something that won’t provide us with any growth experiences.  Safety nets.  Insurance policies.  Spectator sports.  World news.

We might be bored to tears, but by damn we know who the Bulgarians ought to elect for their president, and by damn, we know who killed John Kennedy and what’s the best ball team.

But by God, I was right.  Knew, by damn, who the Bulgarians should have elected for their prez.  Knew which ball club was best, win or lose.

Life flashing before the eyes during the last minute of life, I wonder if a person gets to thrill again to the 1999 Super Bowl.

Or whether he might wish he’d chosen some other rap to ride.  Chosen a life with more risk, more flair, so they wouldn’t write his epitaph, “He knew everything already and played it safe.  Sixty times around the sun and he never fixed a flat tire.” 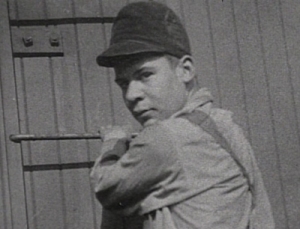 3 responses to “Riding the Rap”