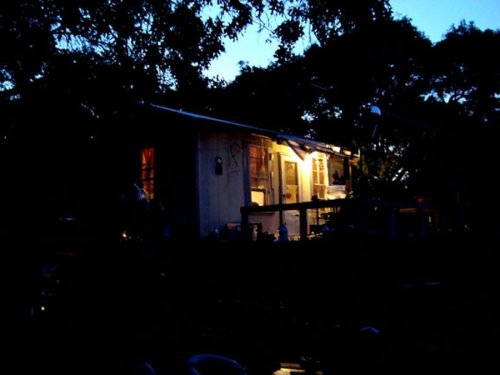 We were blessed with a few days of rain here, beginning with a frog strangler during the night.  Most of the cats and I were in the RV when the tree fell on the roof of the cabin, but it made enough noise to satisfy our needs to hear something.

I made a run for the cabin to see how bad things were, but it turned out nothing came through the roof this time.  Just a wake-up call, though.  Lots more dead trees around the cabin.

After the big rain came a day of light, intermittent rainfall which allowed me to chase down and caulk various roof leaks in the RV roof I’d noted and I plugged a good many of them.  Found a few more when the rain began again, but it’s coming along.

Second night after the rain the feral hogs came in, snorting and banging around between the RV and the cabin.  I just ignored them, let them do their own thing because I wasn’t needing any altercations with that sort of individuals.

Meanwhile, the neighbor up the hill was able to burn a lot of the piles of cedar he’d been pushing up, clearing it.  Looked like a thousand campfires across there.  Beautiful sight in the dark.  Must have been the way it would have appeared for a Civil War army looking across the landscape at the enemy camps the night before a battle.

Next morning the cats and I had our muskets loaded, bayonets fixed crouched in our hidey holes, waiting for all those Yankee soldiers to swarm across the meadow, but I reckons we scared them off.