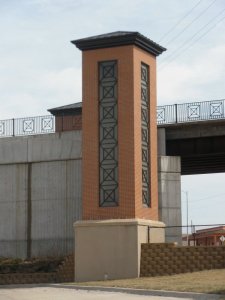 Opaque windows on all four sides at all levels to allow both privacy and lights are only one of the imaginary, unique, compassionate features.

When the tsunami of Chinese [and other Asian imports] spawned hobo-jungles of unemployed US workers a lot of us believed it was an ill-wind that blew no good.  However, what we couldn’t have anticipated was the new birth and rejuvenation of the US railroads to deliver those goods to consumers who still had jobs. 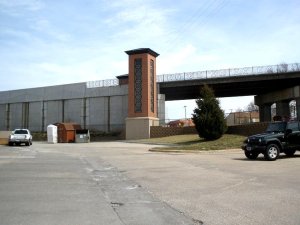 As you see in the photo the nearby dumpster provides easy diving as well as convenient disposal of garbage accumulations for community volunteers policing the area. Note also the ‘donation’ bin located middle left. Nearby residents are thereby able to voluntarily dispose of items of their own choosing rather than having things stolen willy-nilly from their vehicles and homes. A pad located at the donation bin informs residents of the high-rise of who is contributing, and who is not carrying part of the load voluntarily.

The logjam automobiles at train crossings caused by new rail freight traffic forced many cities to elevate tracks inside the metropolitan areas.  Unfortunately the consequence was to displace hundreds of dispossessed workers living in hobo jungles.

The Kansas City Metro area, concerned for the welfare of their homeless population and inadequate available shelters during inclement weather, chose to devote resources to a long-term solution.  Based on the assumption US consumers would never again be able to produce anything but hamburgers to sell to one another and jobs  involving the transport, storage, unloading and sales of Asian products, they [the Kansans] built long-term.

Every elevated railroad intersection has a multi-story Hobo Hilton providing warmth, privacy, a place to relax where they  can be easily located and rounded up for police lineups when nearby neighborhoods fail to use the donation-bin with sufficient enthusiasm.

Asian products are fundamentally responsible for this one more demonstration of compassion so typical of US citizens and local governments.  When conditions change, Americans reach out and respond to help other Americans instead of only giving only lip-service “WE WILL NEVER FORGET” promises and self-congratulatory flag-waving.