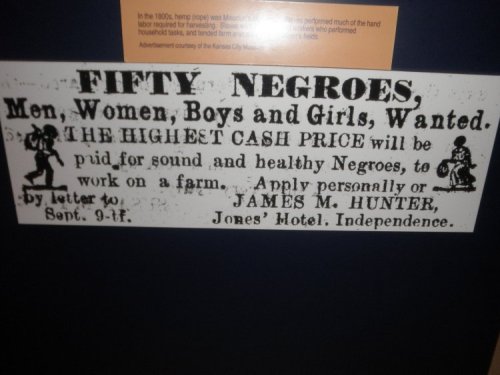 This advertisement in the Kansas City Star isn’t sufficiently well explained to allow me to ease your thoughts by elucidating the reasons it’s included in the Johnson County Museum. 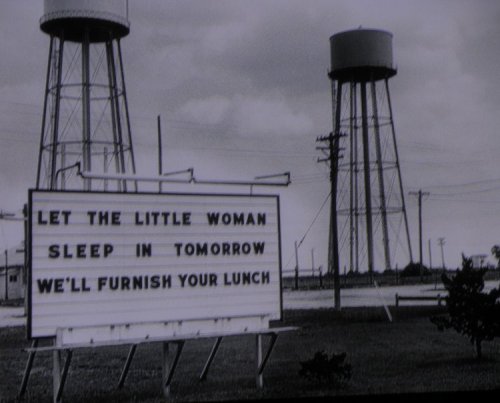 The Sunflower Army Ammunition Plant near De Soto was a huge operation during WWII, the Korean War and somewhat so during Vietnam. Today it’s mostly in ruins, a superfund cleanup site with no funding remaining. This sign was evidently from one of the times when they had plenty of money to throw away feeding workers.

Yet over and over again as you puruse the exhibits in the Johnson County Historical Museum you’ll find yourself muttering, “Why is this place so Goddamned lame?”

Thanks to Sunflower Army Ammunition Plant employees sweating like good Americans the Korean War didn’t last as long as it did and not as many people were killed and injured as actually were. All our boys have come home from Korea now thanks to these Americans.

Some historians possessing PHDs have believed almost all babies born to pioneers nine months after resting overnight within this geographical area were conceived here.

When you have a labor shortage you have to appeal to the baser instincts of every potential labor pool. Gypsies, tramps and thieves. Safecrackers. Negroes. Patriots. Whatever works.

There used to be cowboys and Indians, stagecoaches, battles between  the north and south, raids, rapes, plunderings, blunderings, Quantrill, Bloody Bill Anderson, Jessse and Frank James, the Daltons, the Youngers.

Probably similar things are being spoken in Chinese today somewhere in Asia.

But Kansans know everyone was pretty much passing through, either time-wise, or on their way somewhere else geographically. 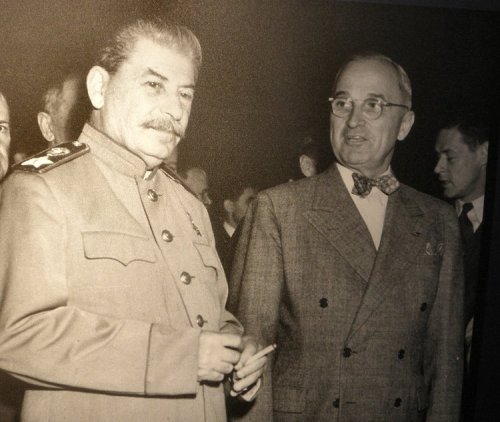 Harry Truman and Joe Stalin fought on the same side in WWII. But both had to readjust their thinking rapidly, think on their feet as shown here, because five years later they were on opposite sides.

Part of the problem is that even though human beings live fairly long lives, human memories are short and budgets are ‘budget-years‘.  Budget decades might allow for long-term alliances and loyalty between friends measured in years or longer.  But budget-years demand constant realignment to keep the funding rolling in.

To help everyone remember when there’s a war going on a lot of strategies have been tried. War Dad caps were only partially successful because older guys frequently became confused about who’s the enemy this week. Especially if they were shooting at the friends and dodging bullets they fired a short while back.

Weaponry ideology has been attempted on numerous occasions.

This was intended as a morale builder. Unfortunately it allowed friendly fire to be identified with too much certainty by those on the receiving end to become a trend.

But attempting to get Kansans out of the yellow brick road mindsets and into  the Jesse James and John Dillinger approaches to history doesn’t seem to lead anywhere.

If one of those guys had long hair I’d lean to believing it was Bonnie and Clyde.

Maybe there’s still something from the Sunflower Army Ammunition Plant days still to be learned and useful.

The US might yet make use of an explosion proof clock. I sort of wish i had me one if I leaned to having wall clocks.

4 responses to “Cash for Negroes”