I was an outlaw motorcycle mama and other historical anomalies 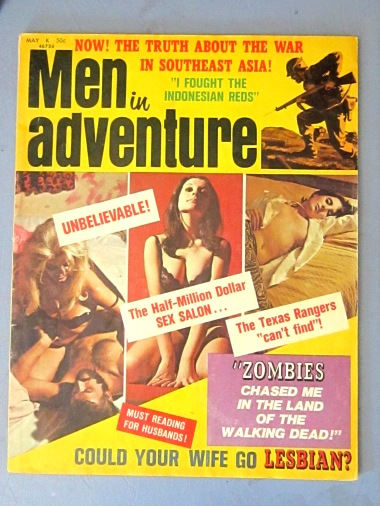 Sometimes trying to piece together our lives can be quite a chore.  Peaceful Warrior posted something on one of the groups about the way his name has been a problem to him, got me thinking about it.

I was given a name at birth that nobody since was able to pronounce.  They followed that with another one nobody’d ever heard of.  So when I exited that berg at the age of 15 or so, I left those two names behind and became Jack for most purposes.

But as a struggling young writer in the late ’60s I found myself needing yet another handle…. I was writing for the hairy chested men magazines… Men, For Men Only, a genre of magazines that vanished by the mid-1970s.

They usually had a picture on the cover of a Marine with a machete struggling with python wrapped around a half-naked woman in some jungle.  That sort of thing.

Well, fact was, in those days I thought there was half-a-chance I’d want to be president, or try to get a decent job sometime.  Didn’t want stories like, Viet-Cong Seductress, or The Half-Million Dollar Sex Salon The Texas Rangers Can’t Find following old Jack around the remainder of his life.

Then the market collapsed for hairy chested men stories.  Best paying hack-writer market left was something called ‘Confession‘ mags, which must have been read by the mothers of Romance Novel readers of today.  I figured, what the hell.

Popped out, I Was An Outlaw Motorcycle Mama, sent it off, got a nice letter back telling me there was a middling amount of what they read they liked, but that I needed to work on my female perspective a bit.  Eventually they published it, but they never bought another, though I tried.  But unless I’m mistaken, Motorcycle Mama was the only time I ever succeeded in passing myself off as a woman.  Only time I really ever tried, during that confessions market thing.

Amazing the things a man will do for money.