A momentary double-star and out of the frying pan: 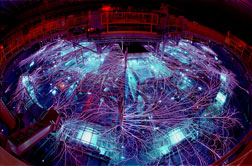 A ray of sunshine to all of you.

That picture is where I’m sending it from.  You are looking at the home of an experiment …. a series of them performed at Sandia Laboratories.
https://share-ng.sandia.gov/news/resources/releases/2006/physics-astron/hottest-z-output.html

Without expecting to do it, nor understanding how, they’ve managed to create a reaction generating temperatures of 2 billion degrees Kelvin.

Double the heat inside a star.

By accident.  Repeated the experiment several times to make certain the accident happened on each occasion.  It did.

Gratitude Affirmation #1, Thankee Universe, that it was a fender-bender and not a head-on collision.

Another gratitude affirmation challenge.  Some other laboratory somewhere else, presumably inside the US:

“Researchers have found that by putting one or two mutations into the H5N1 bird-flu virus, they were able to give it greater ability to slip into human cells. The new information will give virus-trackers something to watch for as H5N1 expands to new territory. “

How many labs in the world, we wonders, did it take to screw in that light bulb?

The challenge this morning is to find something in that italicized jewel to be grateful about.

Well, there are a couple.  Feel free to be innovative and make a few of your own.

Quote of the day:

George C. Scott playing a Major General in Doctor Strangelove:  “I wish we had US one of those Doomsday Machines”.