Causey, New Mexico, was a dot in the road.  Pavement from nowhere to nowhere running between a scattering of frame houses, a small roadside store and gas station.  A rock schoolhouse, a church, and a few rusting hulks of worn out farm machinery in the weeds. http://www.ghosttowns.com/states/nm/causey.html

Our cottage was on the same side of the road as the schoolhouse.  Most of the village was on the other side, including the windmill across the road from our house where my sister and I went for water and carrying the bucket between us to tote it home.

To my tiny, four-year-old mind, the center of town was the store, diagonally across the road, to the left of the windmill.  Everything of importance happened there.  Cars from other places stopped for gas.  The store had Milk Nickles.  Ice cream on a stick, covered with chocolate.  Pure heaven that didn’t come often.

If the store was heaven, behind our house was hell.  The toilet.  A ramshackle tower with dust flecks floating in the shafts of light that came through the cracks between the boards, light coming through underneath where the ground had caved away from the wall.  Home of black widow spiders and the occasional rattlesnake.  The place was a chamber of terrors for me.  I was always certain I’d fall through the hole to the horrors beneath when I used it.

Our little cottage had two rooms.  A sort of kitchen, living area in front also had a little counter where my mom tried to operate a little variety store.  Keychains, trinkets, a handkerchief or two.  Things that wouldn’t be found across the street at the store.

She was also a seamstress.  Most of my memories of that time include her huddled over a treadle sewing machine working on the felt curtains she was making for the stage of the school auditorium.  Mom was a woman twice divorced.  In 1947, that was no small thing.  In that time and place broken marriage was considered to be the fault of an untrained, unskilled, unwise, probably immoral woman.  Two divorces, three children, and no resources made my mother the subject of mistrust by the woman of the community, and disdain by the men.

Memories have probably faded and altered with the half century since all this happened.  The perspectives of a child plagued with fears and insecurities seem real in my recollections, but they, too, have probably been twisted with the turns and circles the planet has made around the sun; with the endless webs of human interactions, relationships formed and ended.

My sisters went to school in that village.  Frances, my sister who died a few years ago, must have been in the second grade.  Becky, maybe in the 5th.  I hung around doing whatever preschoolers do in that environment when everyone else is busy.  I have flashing memories of standing by the road throwing rocks at cars; trying to get the little girl down the road to show me her ‘wet-thing’.

I remember being lonely; of wishing aloud my mom would give me a little brother to play with.  “I wish I could,” she’d reply, “but you tore me up so much when you were born, I can’t have any more kids.”

That trauma of my birth was a favorite theme of my mom.  She was fond of telling me how the doctors were long arriving when I was ready to be born;  how a nurse and my dad held her legs down so I couldn’t emerge until the proper people were there.  How it damaged her insides and caused her to have to undergo all kinds of surgery later.

I recall I felt pretty badly about that.

During harvest season it seemed to me the entire community turned out to work in the fields.  We’d all gather in the pre-dawn at the store, then ride together to the cotton fields in the back of an open truck.  Mom and the girls were all there, along with the neighbors and some of their kids.  Two of the kids were about my age:  Wayne and Sharon Landrum.

In retrospect I doubt we preschoolers helped much.  My mom had put a strap on a pillowcase and promised a Milk-Nickle every time it was filled.  This was probably more to keep me busy and out of trouble than it was to pay for the ice cream bar.  I can’t imagine that a pillowcase would have held the ten pounds of cotton it would have taken to pay a nickle.

The lure of sweets weren’t sufficient to occupy smaller kids, I suppose.  There came a time when Wayne, Sharon, and I wandered off from the field.  At first it was just to take a walk, but the road was long and we must have made some turns.  Before too long we’d gotten so far from the farm we didn’t know the way back.  We were frightened and kept moving.

In the end we found the lights of a farmhouse sometime after dark.  The family brought us inside and fed us something.  We sat around a stove trying to keep warm until some of the searchers came and picked us up.

In the morning at the store all those field workers who’d had to lose part of a day of wages wanted vivid descriptions of the spankings we got.  They wanted to make sure.

Johnny Cash– In Them Old Cotton Fields Back Home
http://www.youtube.com/watch?v=1vCK8mSyhb0

I think my mom would have made a deal with the devil for one of these in 1947.  She didn’t get one, nor anything else of the sort until around 1957, but I don’t recall her washing clothes in a washtub after the early 1950s.  From around 1954 until she got a home washing machine she went to the Laundromats with most of the other ladies.  I’m guessing this one was probably manufactured in the late 1940s.

I’d watched in one of the thrift stores in town for some while, them asking $55, then marking it down to $35, nobody interested enough to plug it in and find out if it worked.  But after it had been there long enough to cause me to figure they were getting tired of seeing it I plugged it in.

No vibration, nothing moving, just a clicking of the spring loaded timer and the sound of an electric motor trying to push the immoveable object.  I unplugged it more quickly than I plugged it in, carried it up to the cashier and told him it didn’t work, told him what it was doing and what was going to happen if someone plugged it in and left it trying to run.

“We can’t fix it.  We don’t have a repair department.”

“Yeah, maybe nobody can.  They haven’t manufactured parts for it in 50 years.  But maybe someone can.”

“Maybe.  How much do I have to risk betting I can?”

He made me an offer I couldn’t refuse. 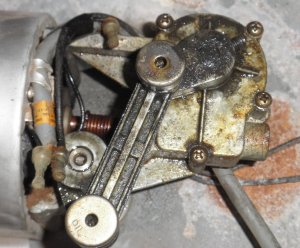 The only tool required to get it running was my foldup Leatherman, oil, and a rag. It’s out there washing seven pairs of my jockey shorts at the moment.  I don’t envy it.

Been a long while since I’ve been so blessed.