The time’s running out to get entries in for Jeanne’s library mail art project.

Three new ones in three days, and I know of two more still to come!
We received two from Jeff Newhook of Newfoundland. This first one includes the Chinese character for “Read.”

The second one was made to promote Johnson County Library’s Maker Space! Thank you, Jeff! 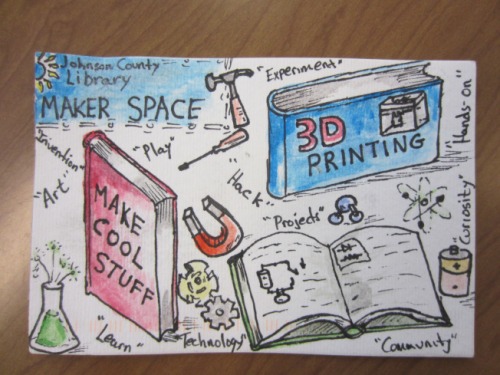 This next one is from Michelle Sherry, in Olathe, Kansas! It’s exciting to see work from Johnson County residents. Thank you, Michelle! 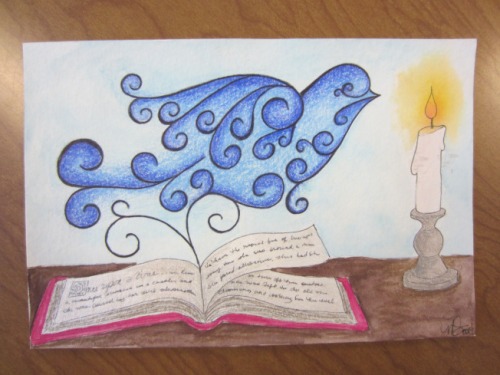 We started to work on the layout for the display pieces last night. They’re moving some of the  desks in our main  circulation area, so we plan to put the display out when they’ve finished playing musical chairs, hopefully Thursday evening.  Here’s a sneak peek at Sarah, my partner, putting some of the pieces on the framework: 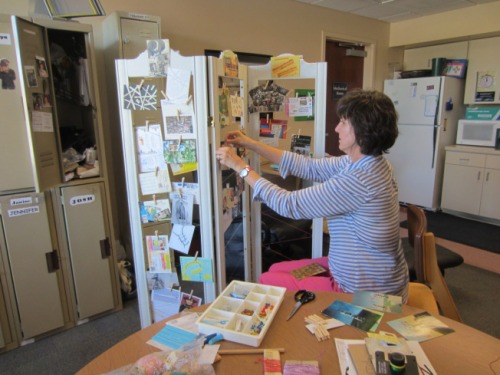 I’ll plan on showing you the other items that arrive (in individual photos) as well as the entire exhibit when I post next Saturday!
Thanks again…

Jeanne’s Library Mail project keeps growing, it seems. There’s talk in the Johnson County Library System of taking it on the road to exhibit in the other branches of the system after it finishes in the branch where she works nights. Cool idea she had with this. Jack

Four cards came in the mail this week! This colorful card is from Sheila Wright, in Red Deer, Alberta, Canada.

The next three cards came from Sara Grob in Flauwil, Switzerland. Sara is one of my pen friends, and I have always admired her creativity. 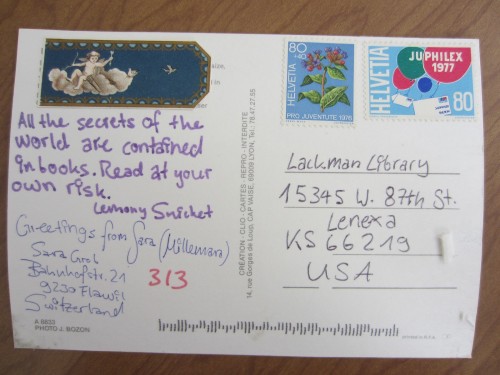 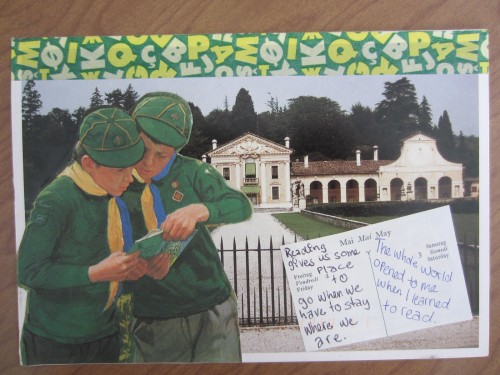 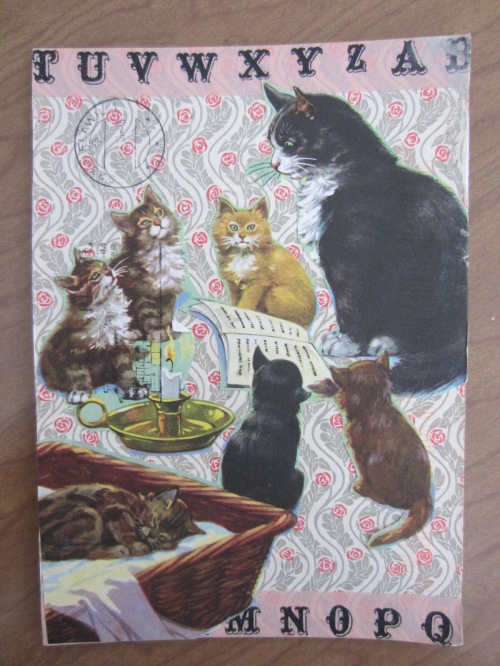 We still have until August 29th to accept your submissions for the exhibit, so if you have something you’d like to contribute, send it along! (Check the About page for guidelines.) Also, if you’ve mailed something and not seen it on this page, leave me a comment and I’ll double check to make sure I haven’t missed anything.

Thanks again, and I hope you have a creative week!
Jeanne

Another great week for mail here at Lackman Library! 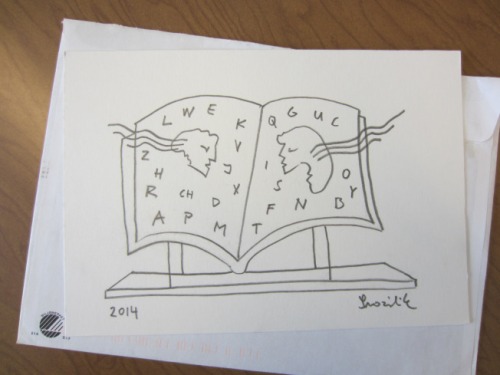 From Andre Pace in Phoenix, Arizona, a letter, a card about his book and two more cards with poetry on the backs! 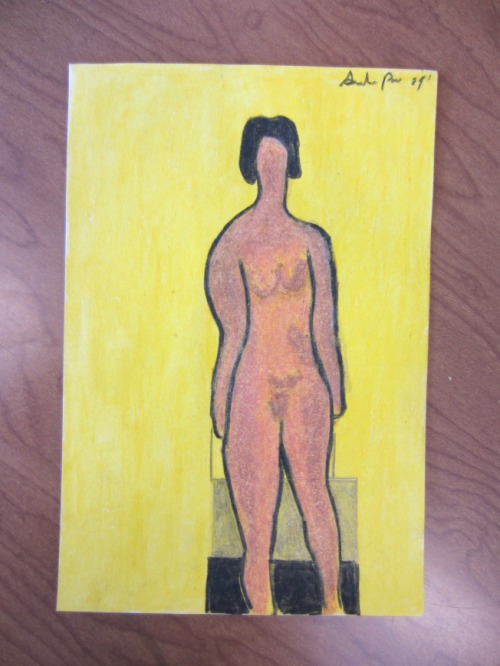 From Peter Mueller in Bremen, Germany, an entire book with a stamped image on every page: 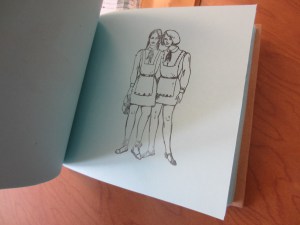 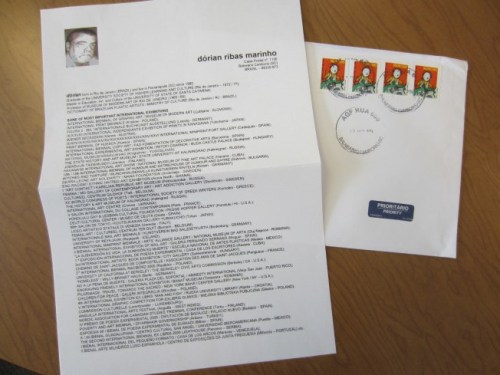 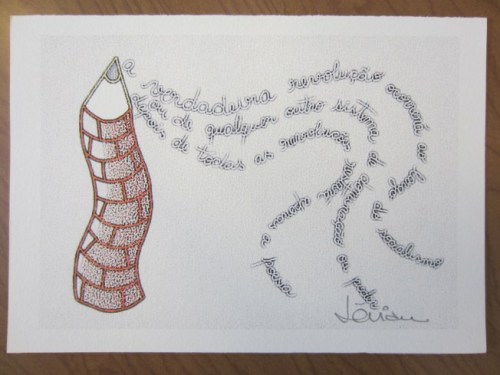 And a card and decorated envelope from Eni Ilis, also in Brazil: We’re so pleased and excited about these submissions! I also made three that I will contribute myself, so here they are. The first one is from a sewing pattern, an old Classics Illustrated comic, and a children’s dictionary:

This second one is a collage I did from a summer reading program log that my mother kept for me in 1963 for the Johnson County Library. In those days, Lackman library didn’t yet…

Hi readers.  Thanks for coming by.  Jeanne’s about to zoom away on her morning bicycle ride, trying to find something long sleeved to block something just this side of the morning chill.    She says she had a lousy dream last night, dreamed Leonard Cohen died.  Bummer.

I recall dreaming Al Jolson died sometime a few years ago, but the fact he’d been dead several decades already took the edge off it.  Not a good dream, but better than when he actually did it.  I was in grammar school at the time and it’s the first time someone I really liked died, I think.  He had just come back from a USO tour visiting troops in Korea and went kerplunk.  Lousier than dreaming about it.

Anyway, in spite of myself I’ve been allowing my mind to wander into Jeanne’s Library job postcard art project.  http://librarymailart.wordpress.com/

Trying to think of something that could be forced down the throat of the post office as a post card and sent over there to be forced down their thoats disguised as art.  I’m considering gluing a 78 rpm record to a 33 rpm LP, a 45 rpm single, and a CD and putting address and stamps on the whole shebang.  Might do it yet if I can find the 78 and 33.

But I wanted to sneak around and tell you about cats, mostly.  That cat documentary at the top got me thinking about Hydrox and might have given me a dream about Niaid last night, or maybe she was just saying hi.  A lot better than dreaming about Al Jolson or Leonard Cohen.

Hydrox, by the way, is hanging in there, and I’m including him in my gratitude affirmations numerous times every day.  Been spending portions of almost every night outdoors doing what cats do.

And I’m about to toodle off to physical therapy to do what old human guys do when they’re hanging in there day to day, including themselves in their own gratitude affirmations numerous times every day.

Visit the blog and submit some mail art