Hobo Hiltons for the Homeless while it’s still Kansas, Toto 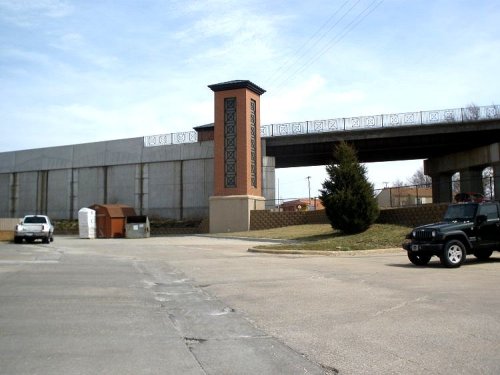 As you see in the photo the nearby dumpster provides easy diving as well as convenient disposal of garbage accumulations for community volunteers policing the area. Note also the ‘donation’ bin located middle right. Nearby residents are thereby able to voluntarily dispose of items of their own choosing rather than having things stolen willy-nilly from their vehicles and homes. A pad located at the donation bin informs residents of the high-rise of who is contributing, and who is not carrying part of the load voluntarily.

Opaque windows on all four sides at all levels to allow both privacy and lights are only one of the imaginary, unique, compassionate features.

Riding by one of these the other evening with Jeanne the inside was actually lit.  Couldn’t tell whether there were any homeless in there, but it was clear I’m correct about what these things are all about.  Despite the skepticism communicated in secret smiles every time I tell someone what they are.

Good they’ve got those opaque windows so those hobos can have some privacy doing whatever it is they’re doing in there all lit up at night.  Comforting to know.  I’d love to see the inside of one, find out which floor the bathroom’s on, whether they’ve got a basement in case of tornado threats.

Nice little parking area there for shopping carts, but it’s vacant in this pic.

Okay, then there’s the other thing.

Had to take Mr. Hydrox to the vet last week.  First time he’s visited a physician this century.  Because of the fact he couldn’t pee.  Cost ‘way up there pushing the borderline of $100, but I got him pissing again, got some green pills to give him in hopes they’ll kill whatever germs were corrupting his urinary tract making little grains of sandlike abrasive to foul his works.

For a while there I thought I was going to outlive the last damned feline I have a contract with.  That would feel truly weird.  Free at last, Great God Almighty Free at Last sort of thing.

10 responses to “Hobo Hiltons for the Homeless while it’s still Kansas, Toto”