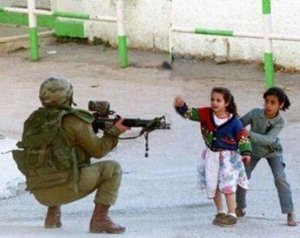 Israeli soldier and a couple of Palestinian children in the ‘occupied territories’.

Hi readers.   Thanks for coming by for a read.

How in the world did we human beings come to be such violent animals?

It’s tempting to conjecture it was after we became ‘civilized’, but that can’t be it.   A person would have to search deeply and far to find aboriginals who aren’t as savage as the Israeli soldier pictured above.    People anywhere no matter what their level of weaponry, cultural sophistication, religious convictions, when they discover someone has something they want, become savages.

And what they want doesn’t have to be, as in the case of the Israelis, land to steal from the people who own it.    Virtually anything of current value will do, and almost any quantity.    Or, failing that, when it comes to killing the ambiguous and abstract can serve as well.

I suppose we’re fond of telling ourselves that unlike our savage ancestors, our own killing and stealing is necessary, patriotic if it’s done by soldiery.   Or if it’s done because of some threat we can contrive the people we wish to kill or rob pose to our tribe.    From down in the streets in drive-by shootings all the way up through the braided channels of finance, race, ethnicity, language and tribe in the undercurrent of our lives.

Our males, young and old, abdicate their moral and ethical choices to politicians they wouldn’t trust to sell them a used automobile.   Politicians who tell them who to kill, who the enemy is.

We hate it when someone kills for reasons we can’t pin to a category that allows revenge by genre.     Some insane fanatic with no ethnic, religious, or philosophical axe to grind slips into a theater, school, mall and starts shooting, sets off a bomb, kills all those people without giving us a target for our reciprocal hatred.

And we aren’t comfortable enough to even talk about the fact so many of those lone killers are veterans, or otherwise somehow connected to the military, were trained by the military to kill.    Maybe because that gets entirely too close to the core of something nobody cares to think about.    School kids in the US aren’t who we trained them to kill, though the training sufficed anyway.

In one of the big movies of the last century a Texas Ranger named Woodrow Call takes the gun away from a bad person we didn’t like and proceeds to beat the bad guy almost to death.     After he’s pulled of the bleeding wreck by several men and a horse, he comments, “He was rude.   I don’t tolerate rude behavior.”  And the audience giggles with satisfaction.

What a puzzlement.     Where the hell did we get so violent?

This entry was posted in 2018, America, History, Spirituality and tagged savage, violence, violent. Bookmark the permalink.