A Navajo Rug built from scratch 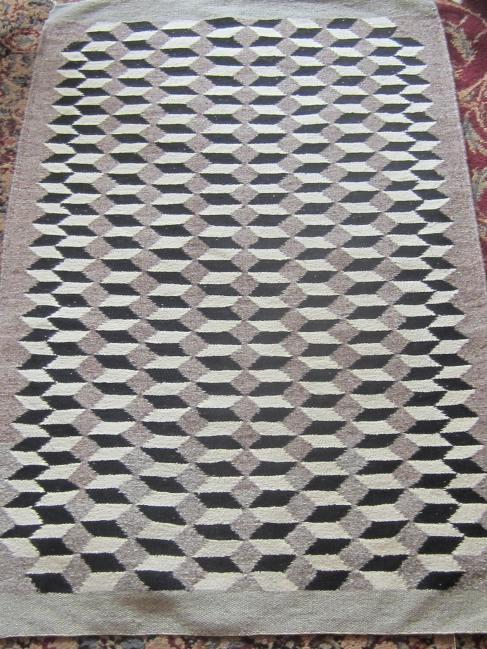 I promised yesterday I’d be telling you some more about Curtiss Cohoe, and I will.  But this morning I feel more inclined to tell you about his aging mother and aunt.  In his own way, Curtiss is a study in humanity, in human flaws and tragedy, challenges encountered and not-overcome.

His mom and aunt are studies in something human, too.  Something a person doesn’t encounter much these days.

About 30 miles south of Ramah, New Mexico, is a piece of Rez called Pine Hill.  It was established to be a trial, an experiment in the way a Rez might become self-sufficient.  They called it a self-determination Rez, and the governance and laws for it are somewhat different than you find on the greater Din’e Rez.

Curtiss’ ancestors had a fair amount of land on the Pine Hill Rez, and the family still does.  Curtiss’ share is 160 acres of hilly, juniper covered acreage, scenic and remote, with a thrown together house that’s seen better days.  His mom uses the land to graze her sheep, while she lives in another house down the hill a quarter-mile away, much better kept and with electricity.

The two ladies live together there, occasionally with other family members when they’re not staying in town, or in jail.  They occupy themselves with their sheep, with gathering the materials for dye, with preparing the wool they’ve sheared, and with weaving on an old-style loom, if they’re not gathering medicinal herbs or doing various Din’e religious activities.

These two women almost never go to town.  Most of what they need is, either right there, or someone brings it from town when they come back.  They haven’t much regard for town, disapprove of what happens to Navajos in town, what they do there.

The Din’e Rez extends from Pine Hill, on the south extremity, to southern Colorado, southeastern Utah, and west into Arizona, spackled here and there with private land.  There are 160,000 Navajo living on the Rez, maybe the largest Rez in the US, and a middling portion of those rarely go off the Rez.  That’s the reason a person only knowing them in town could get the impression Navajo are the sorriest people on the face of the planet.

Many of the ones who go to town are the sorriest the Din’e have to offer, which is the reason they’re in town.  Town, for the Din’e, is where the dregs drift, the tired, the hungry, the huddled masses.  For the most part, the one’s who’d make a better show of themselves don’t get in much.

This is something of a generalization, so it’s got a share of embedded untruth, but it’s nearer the truth than the impressions you get if you’re just seeing the ones who stagger up to you on the streets of Gallup and Farmington with a slept-in-the-gutter look to panhandle you.

I’ll tell you sometime about some of the evils out there, deep in the Rez.  They’re there, same as anywhere, though with a different style.

But today I wanted to tell you about Pine Hill and the Cohoe women, show you a rug they weaved from sheep they raised and sheared, dyed with dye they made from plants and crushed rocks. (Note from Jeanne: the rug in the photo is not the same one Jack’s referring to, I couldn’t locate a picture of that one. This one is also a Navajo rug, though!)

Later, another time for the rest.