Old Jules, have you ever held a snake, what breed & what was it like?

I’ve held a lot of them in my life ranging from rattlers, copperheads and cottonmouths to bullsnakes, gopher snakes, hognose and kingsnakes. Some were dead, some were alive. Alive ones tend to want you to release them and communicate it by wrapping themselves around your arm. Dead ones are just dead snakes. No particular sensation involved. Past summer I killed a gopher snake 5-6 feet long with 8 bulges spaced along the entire length caused by his having been raiding my chicken house for eggs. Handling that one was a bit weird, I confess. 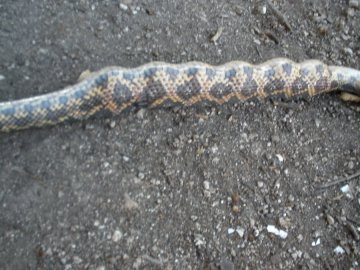 I’ve sometimes thought a woman with several husbands would be an interesting mix. The hubbies who aren’t on duty could play poker, get drunk, watch television or read a book without having to have anything to do with the woman of the house on their days ‘off’.
They’d provide roses, boxes of candy and whatnot when their day in the barrel came up to stay in her favor. She’d love it.
And several adults in the household, husbands-in-law, if she wanted to sit around and eat bonbons all day, could live well with everyone pooling their incomes for the good of the household.
Perfect setup.

Old Jules, what is the most effective way to oppose war?

Refusing to be part of it and refusing to vote for any politician who supports funding for it in countries where elections are a part of the illusion of power might be the only ways. That, and voting for anyone who speaks out against military budgets, military spending, military projection of national power or national interests and concerns.
It ain’t much, but it’s probably all anyone has unless they are ultra-wealthy and part of the actual power community making decisions and manipulating voters and obfuscating actual goals for warfare.

Old Jules, do you have a story that taught you a wise lesson in life?

I learned not to take off a Cessna 140 from a short airstrip when windsocks at both ends of the runway were showing wind in opposite directions. I learned not to have a big breakfast and wait until the density altitude at a 6000 msl runway was feeling the mid-morning sunlight before taking off in an under-powered aircraft.
Most other wisdom in my life acquired the hard way rhymes with those, one way or another.

Old Jules, what is the greatest challenge of our lives?

Learning to be people [individuals] we can love and respect might be the greatest challenge and power we can experience or accomplish this lifetime.
Romantic love is just one of those joys and heartaches we’re blessed with time to time and has little, if no power.
The love that comes with being able to forgive life, humanity and the entire hostile planet of everything feeding on the carcass of everything else is fairly powerful and for the purposes of individual peace it certainly conquers all. Learning to be grateful for the good, the bad and the ugly is probably something requiring love of sorts and it’s definitely a source of power in our lives.