The Trap of ‘Wanting’

A person used to hear young men say, “I’d give my left nut for [fill in the blank]” and everyone knew precisely what he was saying.

Sometime over the past few decades I filtered out allowing myself to precisely  ‘want’ anything without consciously intending to do it.  When I get the silly-assed notion I ‘need’ or ‘want’ something I just stuff it into a file folder in my mind marked, ‘tentative’, and go into a patience mode.  That just involves waiting for the Universe to drop whatever it was, or the components to fabricate it into my life.  Which the Universe consistently indulges eventually. 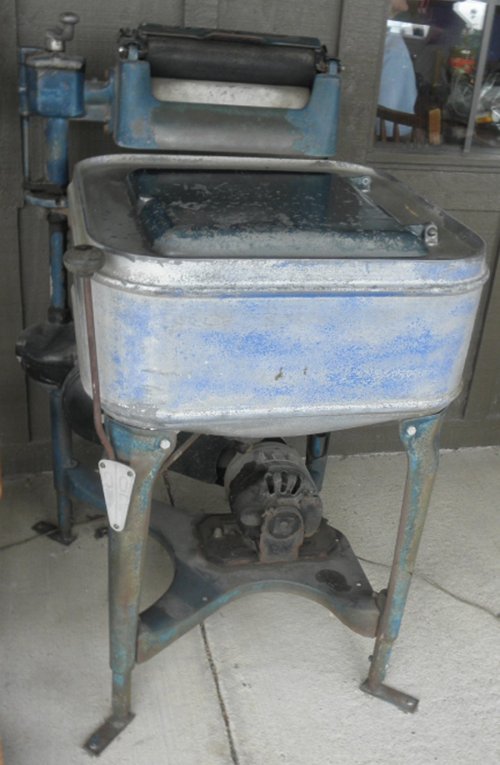 But yesterday in town I saw this and it stopped me in my tracks.  “Wow!” thinks I.  “That thing could wash a lot of clothes at once, and it has a wringer.”

I’ve been using the Thrift Store busted near-freebee 1947 Kenmore for some time and I’m generally tickled pea-green with it:  Clean Underwear and Hard Times.  But it has the decided disadvantage of not having a wringer.  This results in not getting so much water out of the clothes, so they take a lot longer to dry on the line.

I tagged and numbered the concept of the washer above and sent an order for something along those lines out to the Universe.  But as I thought about it driving away it dawned on me what I actually ‘need’ if I were going to do some needing is a carwash chamois wringer.

But the cheapest of those new runs almost $100, which doesn’t fit into any strong likelihoods of me ever forking out.  Even on EBay they run that price and upward.

But those things appear to be built to last.  I’m betting when car washes go out of business they end up in places nobody expected, taking up space and not getting much use.  I’m going to watch for them at flea-markets, auctions and garage sales.  And maybe I’ll post something on the Yahoo FreeCycle groups for Kerrville and Fredericksburg.

I wouldn’t give my left nut for one of those wringers, but if I wanted one I might.

Steve Goodman knew all about the trap of wanting dream things, though.  In this song he just about says it all:

I’d wondered when something of this sort would happen without actually believing it ever would.

Someone keeping better track of current events than I do will probably see this as a yawn. . old news.  But when someone sent me an email after talking to me on the phone about it yesterday you could have knocked me over with a feather.  After pondering it a while this entire grassroots Occupy [fill in the blank] thing strikes me as rhyming a lot with what happened during the early 1990s when the Eastern Block, the USSR, and Iran all fell to pieces in less time than it takes to tell it.

Rich, a close friend, sent me a link to a site, We Are the 99 Percent, which if there’s any substance to it, might be the beginnings of something unpredictable enough to keep it interesting for a while.  I suppose I didn’t think there was enough of that left in the world to even consider.  My initial reaction was a bit of a ho-hum.  These seem to be peaceful folk demonstrating peacefully, which, while gratifying to see going on isn’t likely to undo anything.

But then, in walks someone, or some group called ‘Anonymous’ and joins hands with the Occupy folk.

Here’s the transcript of the latest Occupy Wall Street video from Anonymous:

Greetings, institutions of the media.

The events transpiring within Wall Street have caught our eye.

It seems that the government and federal agencies enjoy enforcing the law a little bit too much. They instate unjust laws as mindless automatons, blindly following orders with soulless precision.

We witness the government enforcing the laws that punish the 99 percent while allowing the 1 percent to escape justice, unharmed, for their crimes against the people.

We have observed this same government failing to enforce even the minimal legal restraints of Wall Street’s abuses. This government who has willingly ignored the greed at Wall Street has even bailed out the perpetrators that have caused our crisis.

We will not stand by and watch the system take over our way of life.

We the people shall stand against the government’s inaction.

We the people will not be witnesses to your corruption and ill-gotten profits.

We will not labor for your leisure.

We will not assist you in any way.

This is why we choose to declare our war against the New York Stock Exchange. We can no longer stay silent as the population is being exploited and forced to make sacrifices in the name of profit.

We will show the world that we are true to our word. On Oct. 10, NYSE shall be erased from the Internet. On Oct. 10, expect a day that will never, ever be forgotten.

We are Legion. We are the 99 percent.

That seems to shine an entirely different light on things.  I don’t know whether anyone’s actually able to jiggle remote computers in a way that allows them to shut down something like Wall Street Stock Exchange, especially after giving warning ahead of time they plan to do it.  But I think making the threat is bound to have every capability in the kingdom concentrated on keeping them from doing it, first, and hauling their butts off to the slammer as soon as they can slap a pair of handcuffs on them.

Gutsy stuff, or a level of confidence surprising from the perspective of a person who figures the powers-that-be can do anything they want to do with impunity.  If they manage to do it the resulting power-shift leverage would inevitably seem to make a sharp turn in favor of the people calling themselves the 99 percent.  But do or don’t, it pulls things out of the realm of peaceful demonstration and gives the powers the excuse they might have been wishing for to drag out the machine guns against the 99 percenters.

The people posting on the 99 percent site appear to be just regular people with a lot of justified bitterness about how things are going and a determination for legitimate change.  But thinking back on the history of revolutions, the signs and banners walking out in front of the parade have always been followed back in the baggage train with enough guillotines to separate a lot of fact from fiction after the dark underbelly of human nature is exposed.