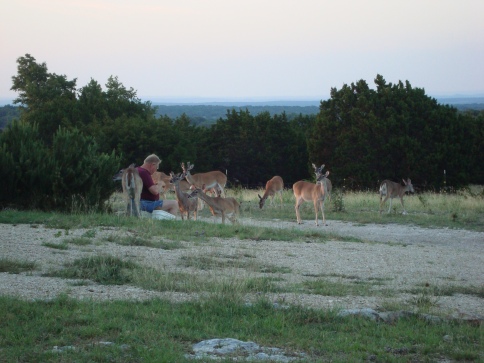 There’s an irony in this picture.  Gale, the man feeding the deer, owns this 300 acres I live on.  One of the reasons he originally bought it had to do with the passion for hunting he spent most of his life following, which, 40 years ago was a passion we shared and was one of the ties leading to our becoming friends.  Between us we’ve killed more large mammals than either of us can remember, though I don’t recall we ever hunted together.

Each of us following the routes our lives took us gradually and independently lost any interest in killing any more if it could be avoided.

Which is still a long way from sitting on a rock feeding tame deer every evening.  I’ve never arrived there.  I’d far prefer the deer staying out in the woods tending their own affairs and leaving me to tend mine, which they refuse to do.

Now, along comes the extended drought.  Today he’s feeding a herd of 30-40 starving deer up there, spending $100 + per month on corn, range cubes and hay.  If he tried to feed them enough to get them beyond near-starvation he’d bankrupt himself doing it.  He’s picking cactus tines out of the lips and noses of his tame deer because they’re so hungry they’re trying to eat prickly pear cactus.

I’ve got another 20-30 down here I’m not feeding intentionally.  ‘Mine’ are so desperate for food they constantly hang around waiting for me to feed the chickens, refuse to be run away further than I can throw a rock, and even come onto the porch for the cat food when any is left outdoors.

But watching a herd of deer starve to death, whether you’re feeding them and given them names, or are just some guy trying to mind his own affairs and have them forced on him as unwelcome guests, is a troubling position to be in.  A few days ago he and I were discussing it trying to come up with some means of providing them more to eat without him having to spend a lot more money doing it.

Eventually it came to me people in Kerrville are probably still mowing their lawns, bagging the grass clippings and putting them out on the curbs to be picked up by the city.  We talked about this a while and considered the fact the bags of grass ferment when sealed, creating a feed we’ve both been around called silage, which livestock love.

Next time either of us goes to town we’ll be looking at lawns to see if we’re right in believing they’re still watering grass and mowing it.  If they are, I’ll soon be putting up a post on Kerrville FreeCycle Yahoo Group asking if any of them would,

But this mightn’t work, and even if it works it’s only a partial solution to the problem.

I’m looking for ideas and information.  You others living in drought-stricken areas, do you have any idea what, if anything, locals with starving deer populations are doing to supplement their feeding?

Any ideas or experiences that might lead to even interim or partial solutions will be appreciated.

Money isn’t the solution to this problem, but the performance in Cabaret does seem apropos somehow: