Important Events from the Middle of Nowhere

The cat you see above came to me as a loaner 13-or-so years ago.  A litter mate to Hydrox, the jellical cat I’d established an actual contract with for the remainder of one of our lifetimes.  Mehitabel, an adult in the household, hated Hydrox and I thought he needed some company, so I borrowed Naiad on an indefinite loan, no contract involved.

Turned out she’s probably the best mouser I’ve ever enjoyed spending a piece of my life with, a survivor.  She went through Y2K with me, has braved every available kind of predator stalking cats from dogs to coyotes, an eagle, hawks, bobcats and probably others she’s never had the courage to divulge, even to me, a liberal and open-minded sort of guy.
She generally trusts me but there’s always been that no-contract thing hanging over her head, and the guy loaned her to me got murdered a few years ago.  She’s acutely aware if I hold strictly to our original agreement I have no option other than to return her to Socorro, New Mexico sometime.  So she’s careful not to cross me.
But I’ve digressed.
When Gale, Kay and I encounter one another we almost always exchange news about which predators are currently threatening our chicken-herds, particularly predators that might commute from mine to theirs, or vicee versee.  Yesterday Gale sprung one me:
“There’s a cat working up here you might want to keep an eye open for.  Kay took a shot at it, but she missed.  Black cat hanging around down by the hen house.”
“Black cat?  Stalking your chickens?”
“Stalking something down by the hen house.  Lots of rats down there because of the chicken feed.”
“Black cat?  You sure it wasn’t Naiad?  She’s been around chickens on and off forever.  Never bothered a chicken.”
“You have a black cat down there?”
“Yeah.  I’ll email you a picture.  I’d be obliged if you don’t shoot her.  She won’t bother your chickens.” 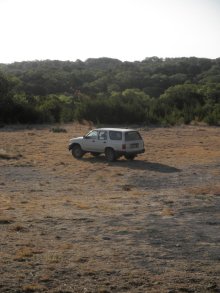 Thursday I needed to go to town, so I packed the ice-chest with ersatz ice, a shopping list, and went to roll the 4Runner downhill to start it so’s to get up to Gales and borrow a truck to go to town.  The 4Runner did okay rolling down but I suppose just half-mile trips back and 4th to Gale’s place hasn’t kept the battery charged.  I’m thinking it spang went completely dead.
So, 100 degrees out there and me all dressed up for town I pulled up my galluses and hiked my young-ass over the hills and through the woods, picked up Little Red, the loaner truck, bumped my young-ass back down here, picked up the list and ice-chest, then off to town, where I happened to notice L’il Red’s license tag and Safety Inspection Sticker had both expired back in June.
Sweated blood and bullets all the way to town, various thrift stores, feed store, grocery store, all without getting into a gunfight with the law over the expired civilization indicated on the windshield.  And not entirely the result of me being unarmed.  Every time I saw a police vehicle I kicked into my ‘invisible’ mindset mode, which works a lot more frequently than a person might be led to expect if the person isn’t into such esoterics.
NEWS ITEM #3
The Terlingua blogsman
http://terlinguabound.blogspot.com/
Posted a piece this morning I love and I think you might love too.  Popular Science Magazine archives going back to before the invention of life as we know it.  Going back so far there weren’t even any human beings running around to publish and read it, at least no human beings as we’re currently prone to indulge in believing humans are.
Stay tuned.  Likely something else will happen here sometime.
Old Jules
Johnny Horton – Old Slewfoot
http://youtu.be/xKcCyhUgbnY

A couple of days ago I came across a tattered copy of Henri Charrierè’s, Papillon on the bookshelf.   I’d read it many times over the decades, but there’s always one more read left in it, it seems.  This might be the last.

Charrierè’s autobiography always has something new to tell me, depending on where my life is when I re-read it.

Papillon (Charrierè) was transported to the French prison islands of Guinea in the Caribbean in 1931, where thousands of prisoners were kept out of sight and mind of the French citizenry.  Devil’s Island was the most well known, but it was only one of the camps where 80 percent of the prisoners died before serving out their sentences.

The book is a story of courage, determination, brutality, as Papillon goes through a series of escape attempts, dungeons, unthinkable tortures, solitary confinements at a time in history when the ‘civilized world’ was no more civilized than it was before, or since.  Eventually, he escaped and became a worthy citizen of Venezuela from 1945 until he wrote the book in 1967.

In some ways the writing and the stories both remind me of the fiction works of Gabriel Garcia Marquez.

Strange how some nationalities get all the credit, while others manage to escape notice.  The Spaniards and Portuguese take their battering from the waning memories of the Inquisition.  The Russians from the Gulag camps.  The Chinese from the Great Cultural Revolution.  The Belgians from the terrors they poured onto the Congo.  The Cambodians, the Ethiopians and the Germans have all been held up to the light and examined with appropriate repudiation.

Somehow the Brits and the French just managed to escape notice when the recognition for some of the vilest institutionally sanctioned acts of human brutality in modern human history.

Papillon.  A book worth reading and thinking about by all you ‘jail’em-til-they-rot’ enthusiasts.

We haven’t caught up to the French, Brits, Spaniards, Cambodians, Chinese, Russians, Belgians, Germans, and other civilized nations yet.  But we have the ingredients.

Plenty of prisoners and prisons.  A freedom-loving population of the same kind of jurors, courts, prosecutors who sent Papillon and thousands of others off to a life and deaths they’d never tolerate for any cute animal that appeared in a Walt Disney film named Bambi.