Having to haul water offers up a rare challenge insofar as cooking and cleaning up afterward.   Before the drought became so severe I’d mitigated the problem by putting my dirty dishes into potato or grapefruit bags and placing them on imported fireant beds.  A day later, voila!  Clean clean clean!

All I had to do is pull them out of the bags and wipe them down with a moist towel or cloth and they were ready to use.

“Mounds are built of soil and are seldom larger than 46 cm (18 in) in diameter. When a mound is disturbed, ants emerge aggressively to bite and sting the intruder. A white pustule usually appears the next day at the site of the sting (Cohen 1992). ”

I looked for other alternatives with other ant species, no joy.  What I discovered is that good American fire ants just don’t want to do that kind of work.  I tried it with every kind of ant bed I could find, dishes stacking up in the sink, me gradually being forced to use hauled water and scouring pads to clean up dishes and utensils.

If I couldn’t find some good American fireants willing to work or some way to locate illegal imported fireants for the job I was going to be reduced to hauling water a lot more, or get a dog to lick that stuff off the eatingware.

Luckily that 24/7 September 13, moonbows and canned thunder outdoor canned thunder brought in the first measurable rainfall in 100+ days here, just as you thought it would.  There’s enough moisture in the soil now to let the fire ant mounds get some altitude so’s I’ll be able to locate them for my dishwashing.

On the other hand, the rain proved my chimney-fix didn’t entirely accomplish what was intended. 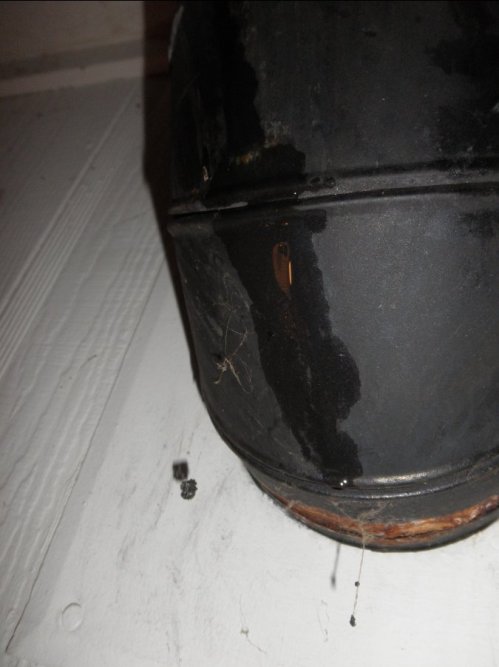 Water was hitting the chimney outside, intruding and running down the stovepipe as far as the elbow, then dripping in.

Hard to think of a good quote to sum up all this.  “It’s an ill wind that blows no good?”

But it’s all good.  I just have to cut that oversized chimney-pipe and put it on there as a sleeve over the old chimney soon.  Better knowing it now than discovering it when Mr. Bullgoose Daddy-Longlegs storm comes in.