Incentives Not to Go Off Food – Rice and Veggie Steamer 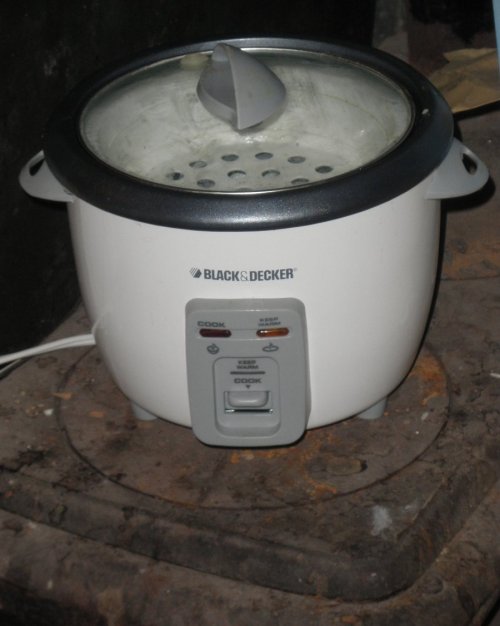 I’ve been mildly curious watching myself for a considerable while.  Weight was peeling off me and I was forgetting to eat.  My body would notify me I hadn’t eaten anything in a day or two by a dose of the blind staggers, or just a dizzy spell to get me thinking back on when I last ate something.

Most of what I cook around here’s cheap and simple because of the fact I ran out of propane early last year and haven’t refilled the bottle, and because hauling water makes washing cookware an expense measured in hauling trips.  So I was living mostly on potato combinations, yogurt combinations, fruit combinations and various bean concoctions.  I was at the point of hating to look any one of them in the eye.

Then one day in the Salvation Army Thrift Store in Kerrvillle I saw that rice and veggie steamer still in the box for sale for a dollar.  It didn’t appear to ever have been used.  So, I bought it, thinking rice and steamed veggies would at least be different.

Sheeze, the best purchase since my High Roller back in 1972.  The tow bar I bought the other day might turn out to be a better deal, but I haven’t figured out anyway to cook with it.  But I’ve digressed.

What I’ve re-discovered is the absolute, euphoria-laden joy of food.  I’m making better meals on that thing than I could even find in a restaurant in town, but if I could, couldn’t afford them.  I’ll make up a batch of one or another Asian-like mix thinking it will last two days, then find I have to fight a war with myself to keep from eating it at a single sitting.

It does require loads of fresh onion, garlic, jalapeno, cayenne, curry and ginger.  I buy bags of trail mix of various sorts, dried mango, papaya, raisins and cranberrys at the Dollar Tree and pour on top, a little of each.  The food bills went up something awful last month.  But I don’t forget to eat.

And the simple truth is, some of these meals turn out to be classed among the best I’m able to recall having anytime in my  life.

Anyone says an old dog can’t learn new tricks is kidding himself.

Leave a Reply to One Fly Cancel reply