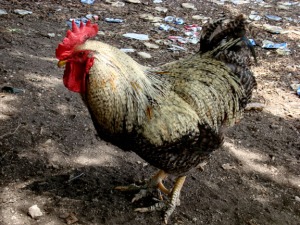 A few years ago when I had a lot larger flock of chickens a pair of fox-critters killed over half of them in the space of two days.  The second day I heard another chicken-drama taking place, grabbed the nearest long-gun and ran out to investigate.

Confusion out there.  The hens were all huddled underneath cedars pointing at one another, hoping someone else would be selected by whatever had them scared.  But The Great Speckled Bird was out in the open, craning his neck, looking for the problem.  As I ran by, he joined me, then hopped out front.  He ran straight for a cedar tree about 30 yards from me.

A fox was under that cedar, saw the rooster approaching, probably saw me, as well, and turned to scurry away.  I quickly dispatched him a few yards into the escape.  At that point TGSB joined me as I examined the carcass, dancing, clucking excitedly.

I’d never heard of a rooster behaving hunting-dog, thought it was an anomaly.

But yesterday he strutted his stuff again, and he’s still got it.  Hens were acting about as before, one out in the open making a lot of fuss, though.  I looked out and saw TGSB running across the meadow for the henhouse.  I snagged the long-gun and headed out to find out what was happening.  Arrived about the same time as TGSB.

A glance inside the henhouse showed black feathers lying around inside.  Probably came from the Australorp raising the dickens initially.  But TGSB was clucking, rubbed my leg and I looked down.  He was dancing around the rear-end of a coon, hind legs and tail sticking out from under Battlestar Gallinica.

I’m sure the coon didn’t realize any of it wasn’t hidden, and I’d never have seen it if TGSB hadn’t pointed it out.

Battlestar Gallinica, the US Space Program, and Fluid Reality 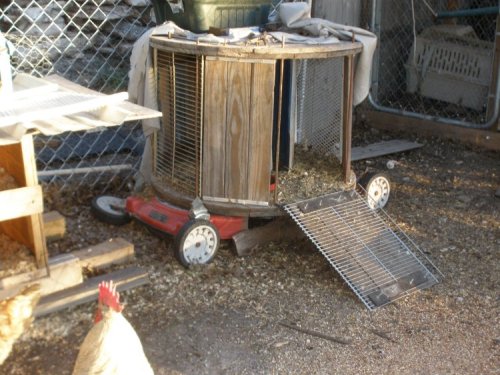 Having resolved the coon issue, I just paused, drew a deep breath and admired him for the ten-thousanth time.

Some of you have wondered why I keep an old, crippled, useless rooster around.  I’ll confess, TGSB is the reason I keep the hens around.