It was flags and God Bless America signs I noticed mostly in Kerrville last trip in.  Had me wondering whether something was going on I’d missed.

Here’s a country where they’re still planting grass in the suburban yards so they can mow it at $3.50+ per gallon for the mowers, giant television sets, shiny new doolies, SUVs, RVs and golf courses demanding more blessings because the ones already provided don’t fill the cup.

(Help me God, because the onliest people I’ve got to choose from are all going to provide me with more undeclared wars, ship more jobs overseas, bail out more banks, automobile companies, allow my savings to be ravaged, and treat my Social Security as though it were welfare beggings.)

I dunno.  Seems to me this nation’s enjoyed considerable blessings for the duration of the lives of everyone living in it.  Even those living on the streets, on the Reservations, just about everywhere, compared to a great majority of the less-deserving who didn’t manage to get born here.

If there’s a diety out there looking for advice maybe a “Thankee!” would get a better hearing than, “Gimme more!”

Maybe it’s time to belly up to the bar and recognize that life’s a tough place to live and sometimes people have to live it without giant television sets and new SUVs.  Judging by the people the US public have selected to look out for their interests it would take a diety a lot more forgiving than the one a majority of believers believe in to heap more blessings on those demanding them.

Thowing good money after bad isn’t one of the traits attributed to the usual diety.

I was relaxing in a camp chair just before dusk yesterday when the Coincidence C0ordinators gave me a nudge to remind me my priorities are too much anchored in the chicken, cabin, drainage issues recent past.  The bachelor roosters were loose for their afternoon free range and my attention was directed to making certain neither of them sneaked off to bloody TGSB.

Suddenly a few feet away I had an oak tree poking into my affairs.  The chickens were going crazy running every direction, guinea-mania drowning out the chicken-panic, me just trying to fathom what I was seeing. 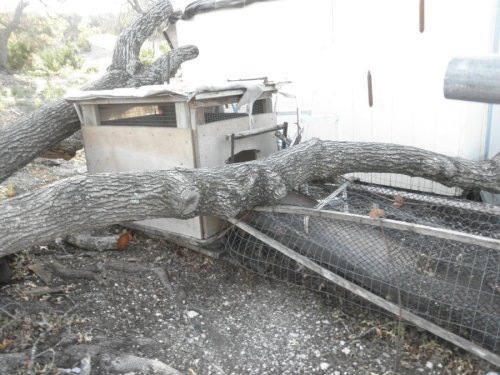 Turned out one of the remaining trunks of the oak that fell on the roof of the storage building a while back decided to put the squeeze on the Bachelor Rooster Containment Center.

Spang blocked off the chute between the pen and the night fortress, raising all manner of questions about protected places to house the roosters for the night. 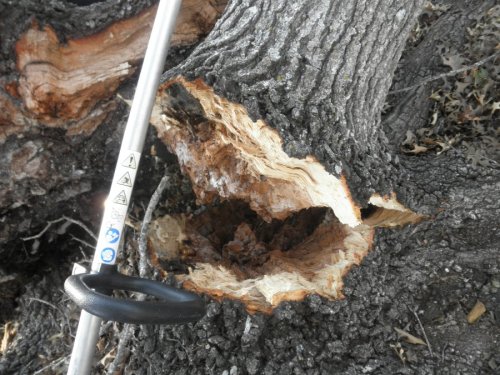 But more importantly, forced the awareness that this cabin, all the storage buildings, even the main chicken pen, surrounded by dying oaks waiting to fall on something important.

Nobody got crushed in this one.  The cats were well away, even I was far enough out of reach so only a few leaves and a bit of dust got to me.  But I’ve got lots of trees and not-all-that-many cats.

I pondered it all last night for a considerable while.  If that tree had come down on me there’d have been a lot of hungry, thirsty chickens and felines lying around with Xs over their eyes before anyone got around to wondering how long it had been since they’d seen me and why.

And the fact is, even though I’m a fair-hand at the one-man-band act, I can’t figure any way in hell to bring a lot of these potential crushers down in a way that doesn’t include them falling on the cabin roof.

So I did a lot of weighing and juggling what I ought to be thinking and doing.  Concluded I first need to scout around for a home for the chickens.  The lady who runs the Habitat For Humanity Thrift Store has a lot of free rangers, along with some goats and two dogs to protect them all.

I reckons I’ll be talking to her next time I’m in town to find out whether she might give them a home.

Meanwhile, maybe put up a tent out in the meadow for summer sleeping until I can feel some confidence the tin roof won’t be sleeping beside me if I snooze indoors.

When I left New Mexico a lot of the reason I felt pressured to do it was the fact of a roof arguing in favor of collapse and an 18 inch adobe wall looking for an excuse to fall.  If Gale hadn’t offered the use of this cabin I’d have had to find a lot less wholesome place than this before the snow flew.

Back to square one, thinks I.