Thoughts on the 1977 School Bus as a Cat House

I’ve been scratching under my hat over a number of issues regarding that old school bus as a potential escape route, studying pictures taken last time in town.  Wondering how a person might get around various problems.

One that jumps out immediately is the fact there’s no way of locking the doors, either the front, or the emergency door.  So a person who didn’t fix that problem wouldn’t want to be a sound sleeper.  Or go off out-of-sight of it if he had anything inside he wanted there when he got back.

Another is that no obvious place to mount a spare tire seems to be included in the design. I suppose a person might rig a way to keep one on the roof if there’s no place underneath to hang it.

Those wheels appear to weigh 75 pounds or more, though, so getting them up there would be a growth experience. 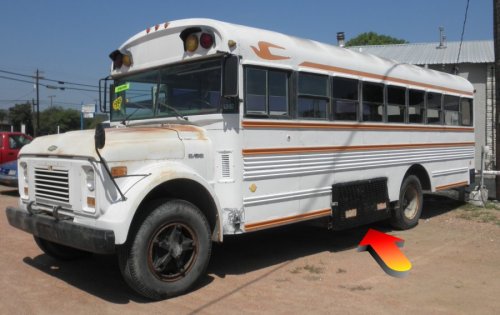 Interestingly, there appears to be an old Volkswagen living underneath there. 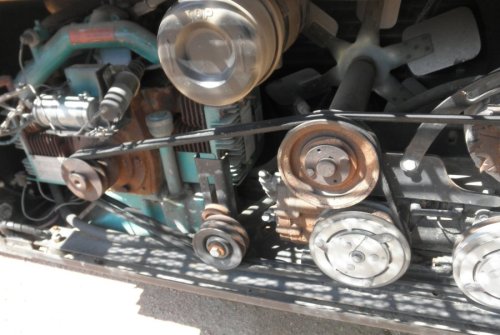 Evidently it was retrofitted to power a huge refrigeration air conditioning complex above the rows of seats, both sides.  My thought is that the shelves are nice, but the refrigerator is gonna have to come out.  Maybe the VW engine, too, so’s to make room for a spare tire.

Meanwhile, the windows don’t lock shut and some screens would have to be rigged to keep insects out and provide a disincentive for cats jumping out open windows to explore the highway. 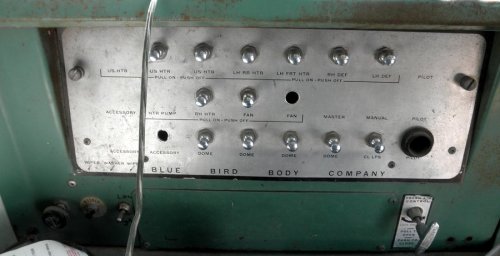 I’ve always wanted something with a lot of switches to try to figure out as I drive along.

Nothing about it, I reckons, that can’t be overcome, but a challenge or two if the thing decides to jump into my life.

[I was watching for a place in here to use the word ‘footfeet’ because it’s such a novel piece of language history involving automobiles.  For the unaware, people used to call the brake, clutch and throttle pedals ‘footfeet’.  But there’s not a lot I can think of to say about the footfeet of this bus.  Hmmm, except,]

The footfeet appear to be intact, adequate and functional.

This email was waiting for me when I logged on this morning, in part:

“The total bumper stickers on a 2000 mile trip was one Semper Fi, two Obama/Biden, one home made one that said Troginator or something, and one that said “ If religious groups want to get into politics they should pay taxes” which I’ll send to you re-sized sooner than the others if you want to use it. If there are certain subjects I might have taken that you’d like me to email the pic of, let me know and I’ll resize those first just to send along quickly.
“Saw something in a comment that the new bumpers don’t do well with bumper stickers, and since almost all the cars I saw were new, I suspect people don’t want to mess their bumpers up with something that won’t come off. Just guessing.”

Jeanne might be right, of course, same as any of us might as easily be as being wrong at any given time, on any given issue we enjoy strong opinions about.

I hate to think US drivers have become so sissy they’d quit spewing their certainties, hatreds, biases and half-baked simple solutions to complex phenomena just because of their paint-jobs.  I’d prefer to think they’ve become uneasy about what’s going on around them, sensed it enough to cause the hair on their necks bristle a bit.

The deliberate polarization of strong feelings in this country regarding politics, religion, environmentalism, ethnics, abortion, sexual preference and patriotism seem to me to have introduced the potential for having tires slit in the parking lot as a means of counter-expression.

The guy in the picture at the top today is Jack Swilling, founder of Phoenix, Arizona.  His hat was his bumper-sticker.  Someone shot a hole in it, ripped it in half so’s he had to sew it back together.

But in another sense, a person might figure, “Hell, if I’m going to be in Swilling’s neighborhood, I ain’t putting no bumper-sticker on my horse.”

The country’s jam-packed with people today who might be sneakier and more cunning than Jack Swilling, but have the same eyes developed listening to talk radio too much.  Or spending too much time in the slammer to love their fellow Americans.  Or snorting too much of this or that recreational drug.

Jack Swilling’s still out there, but he’s wearing his hat backward most likely.  Instead of saying, “What the hell are YOU looking at?” most likely he’ll just drag his keys the length of your paintjob or slit your tires.  Unless he can catch you alone broken down on the highway.