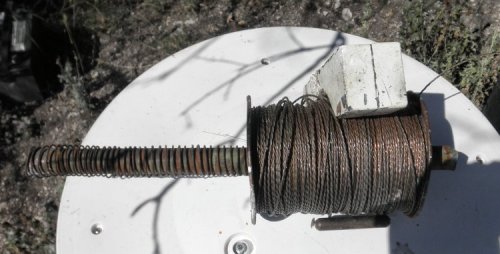 Every five-year-old knows you can create an electromagnetic field by wrapping a copper coil around a soft-iron rod and introducing a current.  But along about my 67th-or-so tip around the sun I began wondering what would happen if you wrapped a copper rod with a soft-iron wire and introduced a permanent magnet to the wire.  Surely, I figured, it would create a field of some sort, not necessarily an electric one, but something.

I tripped around the web trying to find out what people have found it does, didn’t find anything.  Asked my more smart-alec friends, and they only shrugged.

Finally I decided if I want to know, I’d have to try it hands-on.

The front part of the rod is as described.  The back part with the larger coil is iron, more likely steel wire with an anodized copper coating.  Figured to try it both ways, the anamagnetic coating on the copper coated wire allowing it to simulate ‘insulation’ between the wraps of wire.

Well, friends and neighbors, I don’t know what all that damned thing does.  Though I’m getting some fair indications of a couple of unlikely things it seems to do.  Along with it seeming to attract one-hell-of-a-lot of a particular kind of bug.

So instead of me telling you what I think it does, I’m going to suggest if you’re interested you give it a try.  And listen really carefully with your eyes, ears, and complete attention to what goes on around you when you do it.

Meanwhile, this damned thing’s going with me, where ever I might go for a while.  Hasn’t entirely satisfied me I know everything I want to know about it.

4 responses to “The Rube Goldbergism Field”