WWI was NOT an unmitigated blessing 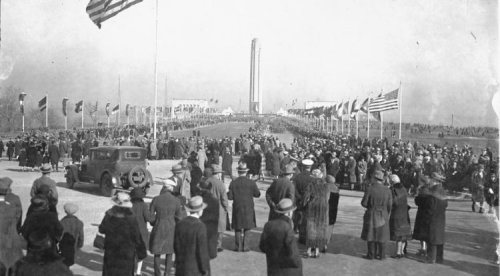 Museum and MemorialBuilt By Kansas Citians, Embraced By the Nation
Soon after World War I ended, Kansas City leaders formed the Liberty Memorial Association (LMA) to create a lasting monument to the men and women who had served in the war. In 1919, the LMA and citizens of Kansas City raised more than $2.5 million in just 10 days. The equivalent of roughly $34 million today, this staggering accomplishment reflected the passion of public sentiment for the Great War that had dramatically changed the world.
“The National World War I Museum at Liberty Memorial inspires thought, dialogue, and learning to make the experiences of the World War I era meaningful and relevant for present and future generations.”
– Mission Statement, National World War I Museum at Liberty Memorial
http://theworldwar.org/explore/museum-and-memorial     &nbsp;

Hi readers.  Thanks for coming by for a read.   Janne, her son Michael, and I are going over to that WWI National Museum and Memorial on Wednesday.  Wednesdays, instead of it costing $16 to see it, a person can fork out $7 and still experience the full value of it.

Even though the coincidence of the 100th Anniversary of WWI beginning and the 4th of July, 2014, might leave a person thinking otherwise, WWI did have a downside.  The end of Russian rule by the Romanovs, for instance was mitigated somewhat by the rise of Communism, in the opinions of some scholars.

And there was the 1918 Influenza epidemic, which arguably mightn’t have happened without WWI.  Sure, WWI gave us tanks, warplanes, better artillery and machine guns.  And we’d have had one hell of a time having WWII without having WWI first.

But it can still be argued that a lot of things about WWI could have been better.  Could have made WWII, the Korean War, the Vietnam War, Grenada, the Cold War, and the various Gulf Wars and Afghanistan adventures better.

The simple truth is nobody.  NOBODY won WWI.  Damned thing might as well not have been fought at all for all the good it did.  But acclimated everyone to the concept of fighting the bloodiest wars in human history, conceding the illusion of victory, and walking away losers.

The USSR was briefly the big winner of WWII, along with West Germany and Japan.  The losers?  Britain, France and the US.  If you don’t believe it, take a look at the US economy, GNP and industry.  Then let your eyes gaze on a world map so’s you can examine the French and British empires today.  Compare that  to Germany, Japan, Korea, any AXIS power except Italy.

So while you’re celebrating the 4th of July and the beginning of WWI this week, do some thinking.  How can you do it better this time around?  How can you keep the losers from winning it?  Resign yourself you will repeat history.  And next time, try using your heads.