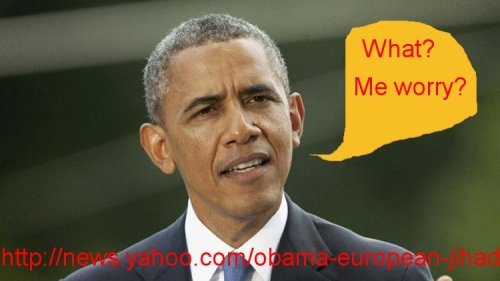 Washington (AFP) – US President Barack Obama warned that “battle-hardened” Europeans who embrace jihad in Syria and Iraq threaten the United States because their passports mean they can enter the country without a visa.

Hi readers.  This guy up there now isn’t worried because 800 Frenchmen, 200 Belgians and 400 Englishmen are battle-hardened freedom fighters having done a little Jihading in Syria.  No worries.

Seems they can now come to the US when they get weary of all that Jihading, without a VISA.  Presumably they’ll have cash enough to cover the costs.  The US strong man says we’ll just have to beef up security nationwide and quintuple the sniper squads of green berets and police swat teams to be ready for them.  No problem.

Fact is he’s been looking for an excuse to bomb those lousy Europeans back to the stone age anyway.  Especially the French, which needs no explanation for anyone who’s non-French.

But the US Strong man has an ulterior motive for the British.  He plans to plant the heels of the combat boots of the US Eighth Army on London long enough to uproot the British Museum, box it up, and haul it to the United States.

Show those limey bastards they need to keep their freedom fighters at home. 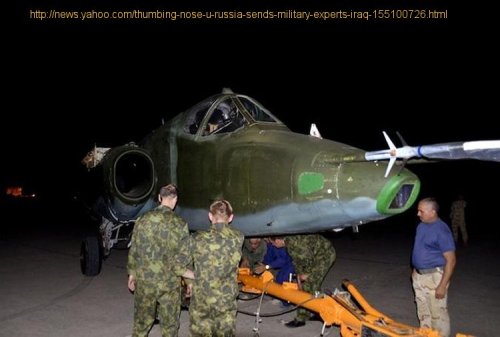 Military experts from Russia detailing Russian aircraft. Civilian on right would like to take it around the patch for a few touch-and-gos, but wonders if they’d mind cleaning the missiles off the pitot tube on the nose beforehand.

I’m figuring that aircraft in the picture is one of their freedom fighters.  About what you’d expect from the country with that particular guy for a strong man.  If those Rooskies want to get serious supporting freedom fighters they need to talk some big bucks.  Trillions, or they don’t have a prayer.

But hell, they call soccer football.  What the hell do you expect? 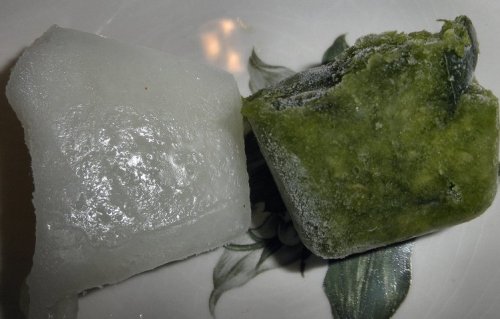 Hi readers.  Thanks for coming by for a read.  Hell, it wasn’t my idea.  It was Jeanne’s.  But I’m the one put that whole bag of onions in the blender, liquified them, and poured them into ice cube trays.  Jeanne just thought of it because the onions go bad so quickly these days.

Anyway, even before the low sodium fanaticism and the  experimentation with various foods that followed, counting sodium mgs the way other people count calories, even before that I used a LOT of onions, a lot of jalapeno [and other peppers].

But Jeanne’s ice cube idea throws the entire thing into a new realm.  A new threshold, new horizon of culinary potential.  And you don’t have to chop them every damned time you get hungry and start searching for something to cook.

The onions turn into tiny onion chips when thawed, and a lot of onion juice.  They make an onion broth quicker than I can type it.  And the jalapeno ice cube are great anywhere.  Shove a popsicle stick into them and you have a jalapeno popsicle.  Otherwise just use them the way you’d normally use a jalapeno shaped like an ice cube.

Remember where you heard it first.  It was here.  Not Jeanne’s Library blog.  But if I could think of a way to keep them from melting I’d send some postcard style to her Johnson County Library Postcard Art project.  Because damn me, these are art.  Tastiest damned art I’ve ever eaten. 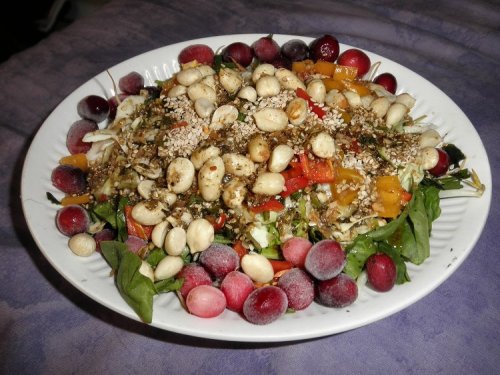 Hi readers.  Jeanne suggested I take a picture of this and post it.  I’m not certain why.  I just got sort of carried away making that salad and as always, it turned out toothsome.

Takes a lot to fill the void, but the sour from the cranberries discourages over indulging.  Not unpleasantly, but insistently.  This one made two meals, second one as appealing as the first.

Where’s the Over The Hill Gang these days?

Hi readers.  Here’s an old guy made the front page of the KC Star today.  73 years old, affluent [660,000 in the bank and a paid-for $300,000 home], and some health problems.  Messy kinda guy, house full of wiring the county workers couldn’t figure out, Physicist from way back.

Gets himself some health problems, takes a fall or two, and Whoo0pee!  This old bastard has money!  The County decides he needs a full time guarded environment, someone with county government to handle his finances.  Hold him captive and the MO Supreme Court refuses to hear his appeals.  The County uses his own finances to fight him in court, sell off his house and all his belongings.

Sunken into the plaid couch of his cinder-block room, John Flentie spends nearly every waking hour obsessed with obtaining his freedom.

At 73, the once-affluent Parkville resident is not a criminal inmate, nor is he an enemy combatant. John Flentie, 73, has been under the guardianship and conservatorship of the Office of the Platte County Public Administrator since April 2012.. He has been committed to various nursing homes, including Cedars of Liberty, where he currently resides in a small, cluttered room. Frustrated by the loss of his freedom, Flentie spends his time listening to music, watching movies and trying to undo his guardianship.

John Flentie, 73, has been under the guardianship and conservatorship of the Office of the Platte County Public Administrator since April 2012.. He has been committed to various nursing homes, including Cedars of Liberty, where he currently resides in a small, cluttered room. Frustrated by the loss of his freedom, Flentie spends his time listening to music, watching movies and trying to undo his guardianship.

Instead — to the extreme frustration of Flentie, his lawyer and a cadre of former high school classmates who for two years have been advocating for the release of a friend they insist is as capable and highly intelligent as always — Flentie is a ward of the state of Missouri.

Since April 2012, he has been committed to various nursing homes under the guardianship and conservatorship of the office of the Platte County public administrator, which claims in court proceedings that taking charge of Flentie, his estate and his possessions was and continues to be for his own health and well-being.

Seems to me we oldsters who are still free ought to be doing some thinking about this.  Hell, I hate this guy.  He was a CIA man or contractor for them for 30 years.  But the fact is, he’s 73 years old and what’s happening to him is merely a demonstration of what can probably happen to any of us.

Probably those of us who still own firearms need to go over there and shoot up the county offices the way Kansans and Missourians used to do back when they didn’t have as much to get pissed off about.

I don’t know what a person ought to do in a case such as this.  Probably he made a bad mistake thinking back when he first got involved with them that nothing of that nature could happen to him.  Same as I am prone to think about my ownself.  And other oldsters probably think about their ownselves.

Well, hells bells, it can happen.  And the legal system isn’t there to give them any relief, reassurance, or justice.  So do we sit still and wait for the jackboots to kick down the door, or do we raid the Platte County Courthouse and teach the bastards some manners and respect?

Even if the SOB they did it to was a CIA crapwad.

Afterthought:  I responded to a comment with this anecdote, but I think it belongs in the main post:  I read a few years ago about an old guy somewhere who’d gotten caught up in the beginnings of something of this sort, went on the run in his car with police chasing him until they ran him off the road and he came out of the car shooting. They had to kill him for his own good. J

I’m probably more suspicious about these affairs than most.  Back when I was a lot younger my mom and all her brothers and sisters got together and had my Granddad hauled off to the State insane asylum where he spent the remainder of his life.  I used to get pleading letters from him to come break him out of there.  Cogent letters, though desparate.  I was young and early married, destitute.  Couldn’t afford to take care of him, or take him in myself.  But afterward I often thought I should have anyway.  He was the only one of the bunch worth shooting.

My uncle, Ursey, went out to his farm, “Hey Dad, let’s go to town.  Get a motel room.  Do some shopping for groceries, go to the auction.”  He left him napping in that motel room, went and got the Sheriff.  Came back and they hauled my granddad off to jail until they could get the county judge to involuntarily send him off to the State Hospital.

I hope each of those bastards – I trust they’re all dead by now, died of something lingering and dreadfully painful.  If not, maybe their next lifetimes can be something akin to his during those last few years.