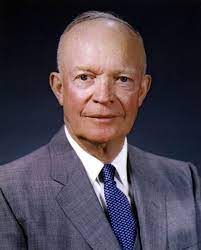 One of the best presidents in US history, to my way of thinking.  He got a truce in Korea, settled relations with the USSR (Stalin died while Ike was in office) during his presidency, though they heated up when Kennedy came into office.

During his administration the Russkies agreed to ‘free’ Austria, neutralize it, which was unprecedented and unanteceded, for that matter.

Ike sent troops to Little Rock, Arkansas to enforce de-segregation of the schools… ended up with a standoff, near shooting war between the Arkansas National Guard and the US Army.  I’d give him high marks for commitment, but mixed reviews on the near shootout.  Those were crazy times… Arkansawyer adults lined up around the school, a group of adult females who called themselves the ‘cheerleaders’, screaming insults at a couple of scared black kids escorted to school by US Marshalls.  Weird, tough times testifying we weren’t a lot better as a species then, than now.  Some, but not a lot.

Eisenhower was determined to see world peace.  He began the ‘atoms for peace’ program, which furnished uranium for peaceful purposes to friendly and third world countries for power plant development.

Ike’s last moments in office, his farewell speech is posted elsewhere on this blog, but to summarize it, he warned Americans to beware the Military/Industrial Complex, which he believed would try to keep America in a state of war and near-war as long as possible, to further their own financial interests and ambitions.

Which was obvious good advice not taken.

Great prez, even though he had Tricky Dixon for VP, and his son married Tricky’s daughter.