I should have known this was coming yesterday when I took a nap and kept noticing a few things crawling on me occasionally.  But I was preoccupied with musing about other goings on.

Then last night I went in there to rest a few minutes and conked out, only to be awakened around midnight-thirty with a lot of things crawling on me.  Pretty much all at once, doing a little stinging here and there.

That half of the bed is taken up by upwards of a hundred books, some read already, some partway through the experience of being read, some waiting to be read, some held for re-reading.    They’re usually not enough of a problem to outweigh the advantage of having a book near at hand when I need something to read.  But when I turned the light on, here’s what I saw last night: 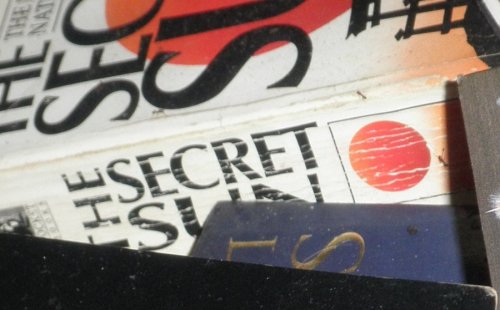 This, I’m reluctant to do, because everything gets disorganized and I lose track of which things have already been read, which are waiting to be read, which are occupied holding something else up, and generally where things are.

So they sneaked up on me.  I had to do it in the middle of the night with no pre-planning, no organization at all.

Sheeze.  Now it’s chaos in there.

Heck, I might as well add this since I’ve got them there together now.  Here are a couple of authors I’ve come across lately I’ve enjoyed a lot.

They’re thrift store books, so I’m not certain you could find them easily, but both authors have an interesting approach, plotting is tight, characterization’s good, and they hold the attention well.

Upfield writes about an aboriginal who’s an Australian police homicide detective and his mystery solvings, along with his ethnic difficulties trying to do his job in that setting, along with his internal struggles demanding he go back to being a bushman.  Good reads.

Alexander’s a completely different bag of tricks.  He’s created a blind brother to Henry Fielding, author of Tom Jones, who’s a magistrate-cum-detective in London.  His characters include Dr. Johnson, whores, a pirate, poets, actors, and all manner of peasantry.  The narrator is actually a ‘Boswell’ sort relating the activities and events, a young teenager taken off the streets.

I don’t have enough distance from the Alexander books yet to decide whether it’s his unique and innovative setting, plotting and characterization intrigues me so much about him, or whether he’s also a damned good author.

Heck, I might as well add these since everything’s screwed up in there anyway:

Doug Stanton, In Harm’s Way is the hair-raising account of the sinking of the USS Indianapolis during the last days of WWII, and the ordeals of the survivors in shark infested waters off the coast of Japan.

Dan van der Vat, The Pacific Campaign is nothing to write home about. Of the thousand-or-so books following the steps, events, tactics and strategies of the Pacific War this one ranks in the bottom third,in my estimation.

Lauro Martines, Fire in the City, is a narrative of the strange and
surprising emergence of Friar Girolamo Savonarola in Rennaisance Florence.  So little attention has been paid this fascinating man and time it’s worth the read even if you aren’t crazy about Martines’s particular style of writing and his method of organizing his material.