Picking your symbolism: The biggest food bird, or the biggest predator?

Hydrox, Niaid and I were out in the RV a little while ago, two of we three scurrying for new places to hide every time a new dash of thunder rolled across the landscape, rain pelting the roof and some edifying lightning to season it all.

Finally the drama ended, but the rain continued a while and the cats decided the world wouldn’t end.  I sat there gazing across the meadow, opened a side window to let the odor of fresh rain inside.  Something big moved around the other RV ……. six wild turkeys grazing on apple cores I’d thrown out the window.  Occasionally letting out enough turkey noise to scare the bejesus out of the cats and have them scurrying for cover.

Watching those turkeys got me thinking about how they were runners-up to become the National Bird, once.  This is no BS.

Time was when most of the people in this country were acutely aware they had relatives, distant cousins somewhere, still laboring for nothing, starving to death, fighting wars and living under the iron heel of aristocrats.  Aristocrats who had histories as far back as anyone could remember of using the biggest predatory bird anyone could think of as a symbol of what aggressive sons-of-bitches they were.

Eagles.  Imperial eagles.  Regal Eagles.  Birds that didn’t do a damned thing but come down out of the sky and kill anything they could catch.  Birds nobody anywhere ever ate.

So a lot of people in this new land thought they’d donealready had everything they wanted to do with eagles and starving, and having heavy heels on their necks by a bunch of damned aristocrats.  They figured if they were going to pick a bird to symbolize the way of life they wanted, a the biggest bird people could make a meal of would be a good symbol.

A symbol of common people with full bellies for a change.  A symbol of people being able to go out into the woods and get a wild meal without some aristocrat telling them that deer, or turkey, or rabbit belonged to them, the aristorcrat, and common people would do better to starve than get caught eating one.

You can look around you and see which one they picked.  And you can consider the 50 tons of laws they’ve made since they adopted that eagle for their symbol, the several tons they’ll pass this year, and know why they picked it.  50 tons of laws telling you what you can’t do, a few tons more this year.

But you have the satisfaction of knowing you have a proud bird for a national symbol.  Not some damned turkey you could make a meal of in a pinch if there weren’t a law against it.

Heavy rain and the cool snap last got me scrambling to give the cats a way to get out of the weather and keep the food dry.  Looks as though it will serve, but I’ve got to work on several more shelters.  They’re there, but need upgrading a bit.

Cat houses and such

I’ll confess I’m behind the curve on a lot of things.  I should have re-wrapped that electrical tape around the busted phone line before the rain hit.  Internet’s back in tin-can telephone speeds this morning.

Gale and Kay were working the Mesquite Show in Fredericksburg this weekend, so I borrowed Little Red today and went into town for necessaries.  But when I’m on the road I always shop the grader ditches and investigate any potentially useful items thrown or blown out of vehicles.  Today was great insofar as upgrading cathouses:

The top was missing on this, but otherwise it's in good shape 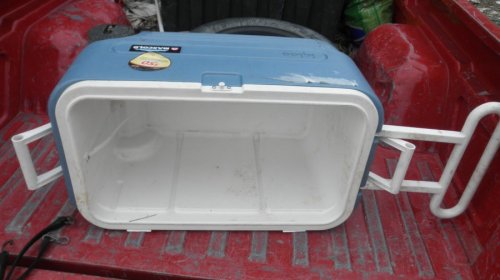 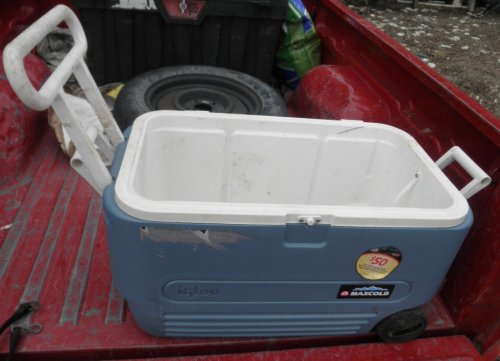 I find a lot of these lids in the ditches and this one almost fits.