The Virtue of Selfishness, by Ayn Rand

I’ve said a few things about Ayn Rand on this blog a number of readers found objectionable.  A goodly number found it offensive enough to cancel subscriptions, which I don’t find objectionable at all.

Fact is, I was once an avid reader of Ayn Rand.  Not being a reader of Ayn Rand was a way a person could declare himself a non-pseudo-intellectual, which of course, I certainly didn’t wish to be.  At the time, admitting to the shameful fact of not having read Atlas Shrugged, or Fountainhead, reduced the stature of the person admitting it to something akin to not having seen Gone With The Wind.

In all honesty I found Rand’s fiction tedious, with the exception of Anthem, which nobody’d ever heard of [few Rand admirers probably have to this day] and didn’t win any intellectual points in the 1960s.  So when I came across The Virtue of Selfishness, in 1965, I welcomed the read because I thought it could provide discussable insights into Rand’s viewpoints while sparing the reader all the muscle-flexing fictional heroes.

Which it did.  And having read it I quickly ceased being an admirer of Rand, to whatever extent I might have been previously.

I suspect those who read, or claim to have read Ayn Rand today probably derive opinions about her, and her work, from the fiction works and admiration for the fictional characters.  The gut-level response to Horatio Algerism with a bit of Paul Bunyan thrown in.

But the appeal of Rand at the time was located in fictional characters.  The Virtue of Selfishness quickly was to be found on the reduced price shelves at the book stores.  Because, the simple fact is that nobody loves an ego-maniac.  Nobody loves a selfish, grasping, gluttonous, greedy person when the fictional fantasies are stripped away.

And giving it a fancy name, objectivism, rationalizing the state-of-being that goes with it, just doesn’t add anything to the equation.  There might never have been a culture in the history of mankind where greed was openly, admittedly, frankly, an object of admiration.  In fact, the opposite is mostly true.

So today when Rand admirers are justifying their world-views by using her tepid arguments in favor of devil-take-the-hindmost, they rarely use the name of her tour d’force work, where she attempts to explain herself.  They know somewhere inside themselves it’s off-putting to the listener.

So the buzzwords are used, instead.  Short phrases bounced around back and forth that needn’t be defended.

Nobody needs Ayn Rand to justify selfishness and self-centeredness, but she provides an excuse, however lame.

Edit 8:12 am – There’s a mysterious, paradoxical side of the 21st Century fascination with Rand I neglected to mention.  Today admiration for Rand is the unlikely and somewhat ironic focal point where fundamentalist Christians join hands with atheists.  Both quote snippets of Rand, claim to have read her.

All of which makes a certain amount of sense for atheists of a particular sort.  But it’s not easy to reconcile with Christianity.  After all, lust, gluttony, greed, sloth, anger, envy and pride have been universally accepted as the Seven Deadly, or Venal, or Mortal Sins since a time long before Protestants.  And I don’t recall any Protestant sect ever declaring openly to repudiate them.

Headlines and commentary from Saturday October 21, 2006:

Old enough to be her Father. Ehhhh?

Sister Silvia Gomes De Sousa, 39, has been  charged with threatening to murder and with arson after allegedly setting fire to the house of the village priest in Roccalumera, Sicily,  Italy.

She stopped by the house where Fr. Carmelo Mantarro, 70,   lives and “I just flipped when I came to the house and caught him in  bed with another woman who is married,” she testified in a court  proceeding.

“We had been together four years and I had even had two abortions because of him.”

The burning question:  Who takes her confession?

Okay.  Let’s see if there’s a novel in here somewhere.

Deadly sins, lust and anger?  Only two?  Hmmm.  Maybe a person could squeeze envy and greed in there…. The nun envied the married woman and didn’t want to share.

Commandments, adultery and for a Catholic, homicide of a fetus.  Covetousness.. married woman wanted what the nun felt was hers.  I count three Commandments.

Throw in a little something on the side involving vows nuns and priests take and you’re as close as priests and nuns are ever going to get to sticking up banks and boosting cars.

I’m not a Christian and I’m about to turn 70.  If life gets boring during the next few years I think I’ll convert to the Mother Church.

I’ve spent most of a lifetime avoiding virtue successfully without having to devote a lot of energy to doing it.  But it’s gotten a lot more difficult.

For instance, I predominantly eat veggies along with some rice.  If I feel the need for protein I throw in some eggs.  Sounds harmless enough.  I’ve got a rice steamer with a platform compartment in the top allows me to steam a mess of veggies and rice faster than I can tell it.  I love it, and it’s easy to clean afterward without using any water.  I run a 1.1 penny US baby-wipe wipe over it after I pour out the vittles and it’s ready to run another race.

But suddenly I’ve discovered not eating meat is at least a virtue, in some cases, a religion.  Wedges me firmly between a rock and a hard place.  I’ll eat a bit of meat sometimes when I can afford it, but honestly I feel better saving the money against the possibility of something coming up so’s I need money.

I’ve got a little sausage in the freezer I had Gale pick up for me last time he was in San Angelo, but in some sense it’s like the quarter-bottle of Y2K Jack Daniels Black Label sitting on the microwave drawing dust.   It’s just too good to use, except on special occasions.

So, for the purposes of not being virtuous, the sausage doesn’t help much more than the Jack Daniels.   I need to come up with some cheap, non-virtuous things I can do that don’t require burning any gas, borrowing a vehicle, or glutting myself more than I do when I cook up a nice Idaho potato, chop up some jalapeno, onion, half-stick of butter and smother it in yogurt or cottage cheese.

pride…. heck, I’m already up to my Adam’s apple with pride.  Any more pride might be a hazard to my health.

covetousness  Maybe that’s a possibility.  Maybe I can think of something to want really badly.  Nothing much comes to mind, but this is too important to reject out of hand.

envy  … That would be pretty cool, finding someone to envy.  But I can’t recall running across anyone I thought was enviable in so long I’m not sure I ever did.

anger  …Took me 50-odd years to figure out I was an angry person, same as everyone claimed I was.  Big job of work getting rid of it once I figured out I was.  Anger needs to make a home in people who don’t know the tricks.  I don’t think I could hold onto anger in a way it would find palatable.

gluttony . . .   Gluttony might work. I’ve got 100 pounds of milo maize out there.  Maybe boil some up, put some butter on it, maybe some pepper and onions.  Curry.  But I’d have to drop in some sausage to keep it from metamorphosing into something virtuous.  Something to think about, anyway.

sloth …  Sheeze!  Sloth is absurd.  It’s a red herring they hang out there pretending to offer up hope in case a person can’t avoid virtue some other way.  But hells bells!  When’s a person supposed to find any time for sloth when there’s only 24 hours in a day?  Sloth is BS.  Forget it. 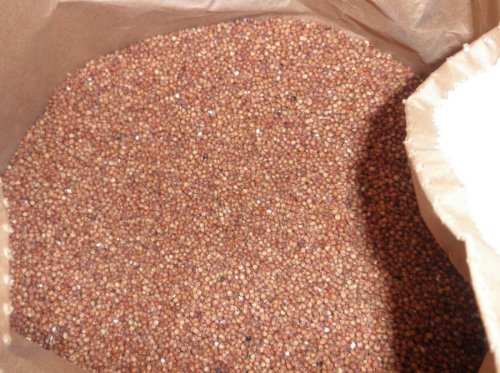 That milo’s looking better and better.  At least until I can think of some more respectable way to clear my conscience without bankrupting myself.