Good morning readers.  I’m obliged you came by for a visit.   Yesterday the online comp spent most of the day doing its own thing.  It all began with some pesky notices in the lower-right part of the screen I’d been getting about updates something someone somewhere thought I needed to turn the computer off to install.

I don’t like strangers telling me what I need to do, so I always just clicked the little X and made it go away.  But the comp was going so skitzy and all the usual suspects didn’t speed it up, nor help anything load right.  As a last resort, I let the nagging signboard do what it wanted.  And it turned out what it wanted was to download umpty-ump megabytes of something-or-other most of the day.

Which actually, eventually helped.  Made me wonder whether it would be advisable to download this browser upgrade websites had been pestering me about all through 2011, claiming their sites wouldn’t support the version I was using after 2011.   Which I naturally responded to by clicking the handy X.

I don’t let any website tell me whether my browser’s going to be supported or not.  But since I was already letting strangers push me around and tell me what to do, I figured what-the-hell.

Don’t ever let anyone tell you upgrading a browser on a slow connection is some easy, fast thing to do.  Hours upon hours, it took.

But don’t ever let them tell you it doesn’t make a difference on the way the comp behaves itself, either.

Just before beginning this post I clicked my young consciousness over to http://spaceweather.com/ to get updated on all the important news and make certain Old Sol didn’t need any help getting up over the horizon.  He didn’t, but I came across this: 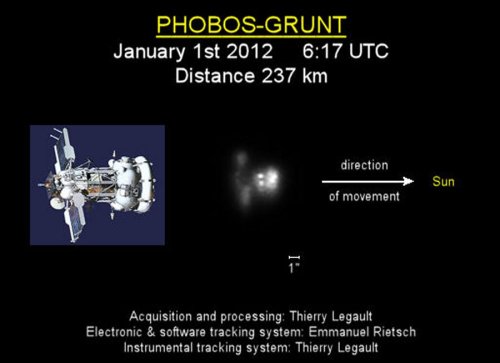 DOOMED MARS PROBE PHOTOGRAPHED: Russia’s Mars probe, Phobos-Grunt, has been stranded in Earth orbit since a main engine failure in early November. The spacecraft is now sinking back into Earth’s atmosphere, with re-entry expected in mid-January. “On New Year’s Day, I traveled to the French Riviera (850km from home) to record Phobos-Grunt’s last passage over France,” says astrophotographer Thierry Legault. This is the picture he took through a 14-inch telescope.

“It appears that the satellite is moving backwards with its solar panels deployed but not receiving the sunlight,” notes Legault. “This may explain why Phobos-Grunt had no energy to communicate with Earth.” An 80-second video shows the probe soaring almost directly above Legault’s observing site on the Plateau de Calern. “At the scale of the video the satellite would cross your screen in about 1/30s,” he says.

While a telescope is required to see the outlines of the spacecraft, the human eye alone is sufficient to see Phobos-Grunt as a speck of light in the night sky. On high passes, it glows almost as brightly as a first magnitude star. Check SpaceWeather’s online Satellite Tracker or your smartphone for flyby times.

That Russian Grunt bears a striking visual similarity to the Toyota Grunt sitting across the meadow, when you look under the hood.  Yeah, on the Russian Grunt the bell housing’s out front and the radiator’s behind, trying to catch up.  But otherwise, there’s a lot of kinship between the two.

Both have a lot of miles on them, and neither one’s running the way it was designed to do.  If the Russians don’t want the thing I’d sort of like for it to come down out in the meadow here to see if I could rob some parts off it for the Toyota.

But this has all gotten longer than I intended it to be.  I’ll save the cat matters for some other post, except to say they all send their regards to you people hanging around in the non-hereabouts parts of the world.

Thanks for coming by.