Got an email I haven’t opened, presumably from Norton Symantic noting I haven’t plugged the modem into the E Dell Machine to test the 79 mb downloaded driver.

At least I assume it’s from Norton Symantic, though the whatchallit ‘from’ says it’s from Best-Penis and the subject line says, Max-Gentleman Enlargement Pills.  But I’m not fooled.  Norton Symantic was popping screens up on me all manner of ways yesterday creeping in with things intended to interrupt my focus and goals for eventually getting this E Dell Machine online.

Norton most likely suspects a degree of trepidation on my part and is poking sharp sticks in my eye suggesting I need to grow a set of whatchallits and go ahead and test it.  After which they’ll sell me some penis enlargement software to make it work, which they figure at the moment it ain’t going to do. 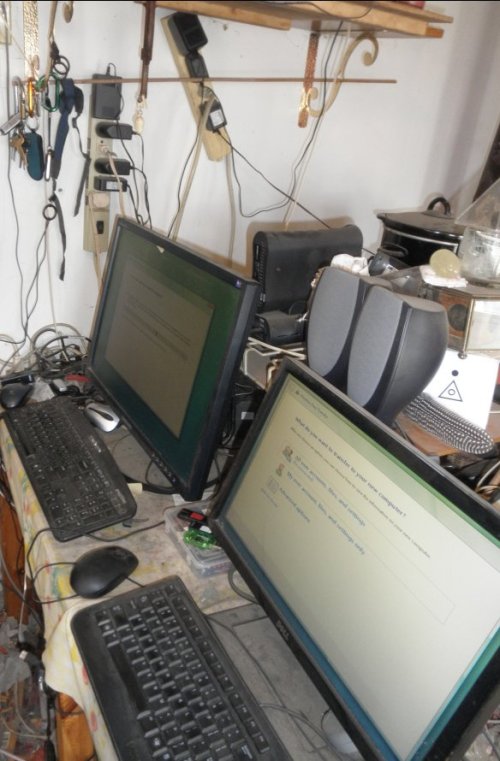 Good morning readers and thanks for coming by for a read.

Hopefully by the time you read this I’ll be strutting like a peacock, wearing my Texas Hatters Manny Gammidge High Roller tilted at a jaunty angle, certain I’m a smarty-pants extraordinaire.  At least that’s how I’m planning the final chapter of this monumental butt show.

But here’s the rundown on the plot thus far.

Ed’s comment reminded me I had a weirdly shaped and sized hard drive I’d yanked out of an old Vista E Machine I bought new at WalMart a few years ago and it died after about six months and $150 spent in repair shops.

So I pulled open the Dell and voil’aismimo!  The drive looked more-or-less the same as the one from the E Machine, aside from some extra parts.  I worked an hour-or-so getting the extra parts off the Dell drive and onto the E Machine one, installed it, reassembled everything, clenched my teeth really hard and squeezed my eyes shut and I turned that commie pig on.

She booted spang up, showed me a screen I hadn’t seen since the E Machine died.  But, the fly in the ointment was that the modem still didn’t get recognized.  I ran through a flurry of downloading alleged drivers from sites all over the web, putting them on a CD, loading in the E Dell Machine and having them snubbed like clerks in camera stores used to snub a person brought in a Brownie Hawkeye for a roll of film.

Meanwhile Norton Symantic was slipping me mickeys behind the scenes, popping screens up at me threatening to keep me company if I kept downloading from non-regular free driver places.

Which I’ll keep short by saying, led me to Dell and my current act of genius downloading 79 mb on a dialup with 12/2 Romax wrapped in electrical tape between me and the power pole.

So, tomorrow morning when you read this you’ll be seeing words of a man with a modem working on an E Dell Machine running Vista, is the way I want to end this chapter.  Wearing a 1972 vintage Manny Gammidge Texas Hatters High Roller.  A man commanding respect, admiration and quite possibly veneration.  A man you want to be like.  Same as before all this crap happened.

That’s the proposal for the chapter.  Assuming the editors don’t think that 79 mb download wasn’t a high enough price for our guy to pay to get a damned modem working.

I’m going to schedule this tonight before I go to bed to post at 6:00 am.   Just to make sure it goes to work before the editors finish breakfast.

6:46 am edit:  Seems prudent to get other things done before I unplug the modem here and plug it into the other machine to test the driver.  The world needs coffee before it begins the kind of foolishness this day might be destined to bring.  It isn’t that I’m reluctant to step boldly into the future.  It’s just a minor fit of hesitation on my part to contemplate the Odyssey Homer never had to deal with.  Putting a computer on my shoulder and walking inland until someone asks me what it is might be the next step, dragging the Toyota 4-Runner along behind until someone asks me what that is, too, seems a lousy day to anticipate.