WordPress is being a communist this morning. Or maybe the world came to an end last night sometime but it hasn’t gotten to me yet because I’m so far out in the country.

I was going to regale you this morning with some things I dug up online about building and retrofitting hydrogen generators to internal combustion engines yesterday but on the off chance the world ended last night, I won’t.  The whole thing might be a moot issue.   Talking Our Way Into Oblivion – Hydrogen and Hot Air

I’d also thought I’d share with you a couple of interesting things that appear to occur when the center of mass of a system of orbiting bodies changes, but if the world ended there’s no point getting into that, either.  I suppose I’ll be obliged to break my iron discipline and focus to tell you about a couple of things happened here a while back.

A while back this dove flew in here and spent a few weeks sharing the chicken feed on the ground.

I’d never seen a white dove before.  It’s forty miles to the nearest town of any size, fifteen miles to a village big enough to have a gas station/convenience store.  So I didn’t figure it was a pet.

But when I approached it on the ground it didn’t fly.  At first I thought it was injured or sick.

It had no fear at all.  Nothing seemed to be wrong with it. 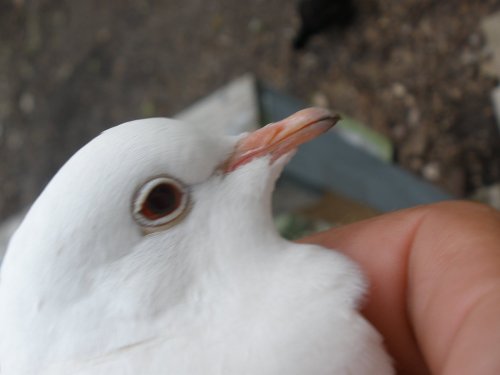 A week or two after these pictures were taken it began spending more time higher in the trees and less on the ground.  Then it evidently just decided to move on to whatever was waiting for it somewhere else.

A free spirit.  Sort of reminded me of the Rainbow folk I’ve shared campsites with in remote places and occasionally picked up as hitch hikers.  Didn’t have much in common with the wild doves around here and nothing at all with birds somewhere else in houses with cages.  Marching to her own drum, not letting anything get into the way of doing it.   But not living in fear.

Which behooves me to tell you a bit about the Rainbow Family.

I first attended a Rainbow Gathering as part of a team of New Mexico Emergency Management Planning and Coordination  [EMPAC] personnel assigned to be there with the National Guard during the Taos gathering of the early 1990s.  I’d never heard of the Rainbow group prior to that, had no idea what to expect because neither did anyone else in New Mexico government.

What I observed was Woodstock without the music, a lot of folks who reminded me of my own younger times of long hair, protest, sex, drugs and rock and roll on the family side of things.

On the other side I saw National Guard troops loaded with live ammuntion and no clear instructions and rules of engagement being frequently hassled, treated with condescension alternately with re-enactments of some flower-chile ‘Come Join Us’ pleas from earlier times.  ‘Family’ members running alongside government vehicles engaging in every form of engagement except disengagement.

And  to complicate matters further,  a civilian group of Taos Hispanics who wanted nothing so much as the gathering broken up and out of those mountains they considered their own.

I spent a harrowing week or two up there trying to keep my mind from falling into a state of spacial-time disorientation.  When it was all over we drove back to Santa Fe wiping our brows in relief that nobody’d been shot, beaten to death by locals, no major incidents.   My thoughts at the time were as far from ever wanting to see another Rainbow Family member as they could get and stay on the planet Earth.

I count myself lucky to have encountered many of Family members in other settings during the two decades afterward, picking them up hitch hiking, sharing remote campsites, discovering there’s a side to some part of the Rainbow Family membership I hadn’t noticed in the Taos experience.

Gypsy-like free-spirited, thoughtful and considerate people just doing their own thing, trying their best not to leave any bigger mark where they’ve been than they absolutely must.  Good pleasant folks to spend some time with.

So long, I’d have to add, as a person stays clear of the party-animals and really cool people drawn to the mass gathering.