Hi readers.  Thanks for coming for a read.  I bought this tome in a thrift store in Kerrville before I knew it’s the hottest piece of literature to be had in TimeWarpVille [Junction], Texas.

I suppose that qualifies me to brag I have a nose for cool, an instinct for hot, to boast that I was also country when country wasn’t cool, same as the song said.

Over in TimeWarpVille every business in town has a stack of these with a $10+ pricetag.  And customers standing in line to buy soft drinks, potato chips, deer corn, and steel fenceposts will each answer verbal quiz questions about it, when asked. 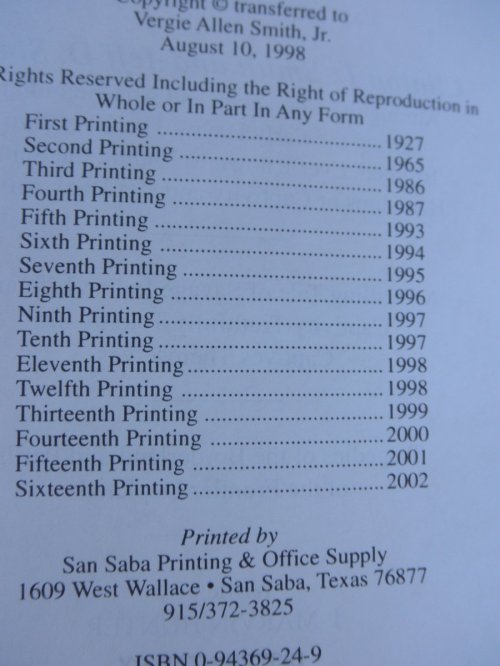 They likes it.  They likes it real good.  They know the family heirs to the publishing history.  This I know to be true because I asked and was answered.

I’m reasonably comfortable some of the other parts of this non-fiction book are also true.  There’s a fair amount of documentation and affidavits from people alive at the time of the incidents certifying various parts of the story they had personal knowledge about.

I’d guess the older brother, Clinton’s part of the tale he’d possibly be able to pass a polygraph on 75-80%.  Maybe higher.  Most of the details he gives don’t conflict with anything clearly different and known under more verifiable circumstances elsewhere.

Brother Jeff’s part of the tale, however, has a somewhat different air about it, to my suspicious mind.  I ain’t going to say he wasn’t traded to the Apache, not going to say he wasn’t adopted by Geronimo.  But if I had to stake any money on the truth or fiction of it I’d put my large bills on most of his story being lost in the dust of history because it ain’t on these pages.

Not that it matters.  Fact is, the book is a hoot, an interesting read, a flashback to a time when Brother Comanche still rode southeast under a Comanche moon, killing, taking captives, stealing horses.   Good descriptions from a couple of kids of settlers before their capture about their lives, the family.

And both brothers succeed in spinning yarns Marvin Hunter could put on a printed page well enough to keep the reader turning them, not putting the book aside for something with more potential for holding the mind in place.

You Texas readers would almost certainly enjoy this tome, thinks I. 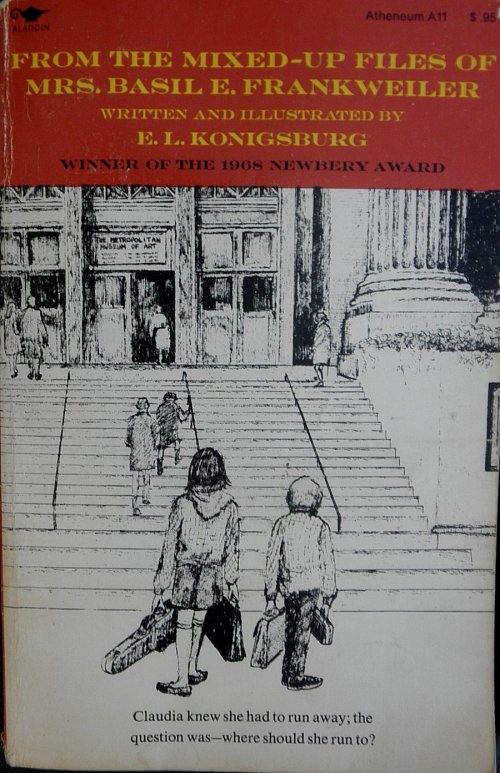 Hi readers.  I don’t know whether I’ve ever mentioned on this blog that I’m a big admirer of a lot of young adult fiction writers.  Mainly Newbery Award folk because I wouldn’t take a chance on anything else that didn’t come highly recommended.  So, when I found From The Mixed-Up Files of Mrs Basil E Frankweiler, by EL Konigsberg in a 10 cent basket at the dogpound thrift store in Kerrville, I snagged it.  Same as I’d have done with any Newbery.

I’m glad I did.  Fact is, while I haven’t encountered many books with that award I considered unworthy of the time spent reading them, occasionally I have.  But this one’s from back when writers were writers and readers were glad they were.

The basic plot’s just a brother and sister who decide to run away from home.  But beyond that summary it becomes a reading experience, as opposed to the alternatives too frequently provided in best selling books.

The kids each have talents, each balancing the weaknesses of the other, each recognizing that fact, and the entire plot and characterization orbits it, relies on it.  The brother’s the financial side of things.  The sister’s a planner.

So she plans where two youngers could probably really have gotten by with hiding in 1967 for a couple of weeks without being discovered, without getting bored.  And the brother provides the funds needed to get there with his winnings from cheating at cards on the school bus.

What’s not to like?  Hell, nothing’s not to like.  It’s a fast read, so it leaves the reader with plenty of time to read it twice, which he’ll want to do if he’s an admirer of good, serious wordsmithing manifested in plots, characters and fast moving events.

They hide in the Metropolitan Museum, evade guards, study a sculpting by a master, discovering secrets about it,  and bathe in the fountain at night fishing for coins.

Great read if you aren’t a snob who only reads really good Stevie Ray King, Norbert Robbers and Louis L’Amour.

Naked City in the Sticks

Good morning readers. Thanks for coming by for a read this morning.

I’ve resisted posting a blog entry about this incident a couple of days now.  Felt I needed to allow it to settle in my mind enough to think calmly and clearly about it.

I’ve explained before that the nearest property line is almost 1/4 mile away from here.  No line-of-sight to the nearest dwellings.  Woods, rough roads and rough country between here and the nearest neighbor.  Aside from Gale, no reason whatever for anyone to be anywhere near here, and Gale rarely comes, never without honking his horn at the top of the hill. [That bluelike speck right-of-center in the pic is the roof of the cabin.  The barely-visible white loop’s the turnaround.]

Sooooo.  A couple of days ago I’d just finished my afternoon solar shower, poured a couple of gallons of water over my head for a soapdown shampoo and rinse out in the driveway.  Went inside to towel off and stepped back outdoors onto the porch to let the sun finish things off.

A cammie 4-wheeler with two people aboard was creeping by about 30 feet from the porch.  I jumped back inside to throw on some trousers and by the time I got back outside it was gone.  Not a sign of whomever I was wanting to throw rocks at and shout lectures about respecting property lines and the not-to-be-aspired-to human trait of nosy intrusion.

Because that 4 wheeler wasn’t coming down the driveway.  It came from the direction of the chicken house.  Nothing in that direction for another quarter-mile to the north property boundary fence.

Even though that new neighbor’s got 90-odd acres for himself and his family to fart around on knocking down trees and blasting away with every caliber firearm ever invented, 90 acres just isn’t big enough when a man’s richer than 18 inches up a bull’s ass.  Got rich early enough to get thinking he could run over everyone in reach, bluff whomever he couldn’t buy outright.

When he was coming down here trying to get me to go on wages working for him I had a vague suspicion this was the kind of thing he had in mind, ultimately.  Getting a leverage in place so’s he could do anything he pleased.  He’d already described every property and house within sight of here in enough detail to suggest he’d explored already what was none of his business.  Described it without blushing, as though it was a given.

Sometime during those visits he was making down here I asked permission to haul water from his well up beside the driveway, and he’d given permission.  His water’s nearer than Gale’s from here, and the road’s better.  I’d done it once already.

But after this incident I’ll be going back to hauling water from Gale’s.  And the only thing I’ve got to say to him about what happened the other day:

“Stay the hell away from this part of Gale’s property and keep the kids and grandkids away from it when they’re visiting.  One of the rare positive stereotypes about Texans is that they respect property lines.  Where the hell did you grow up?”

Says he reads this blog.  I hope he does.