The TimeWarpsVille Saga – A Town Beginning to Forget

Trucking down mainstreet toward the courthouse I immediately noticed the flags are gone, and of the dozen-or-more of these signs there a month ago, only three are left.

Bad sign, thinks I while ignoring inconvenient puns.  Might mean there are some intelligent, ethical people in Junction, Texas, with some class.  People who aren’t allowing themselves to be brow-beaten by kneejerks to backhandedly exploit the dead for some obscure political message.

People who’ve thoughtfully arrived at the realization that some things are better forgotten.

Lousy people to have on juries.  Might reduce my chances for getting exempted.

However, then I arrived at the courthouse.  The place was strangely quiet.

But parenthetically adds we ain’t allowed to burn down the County Courthouse. 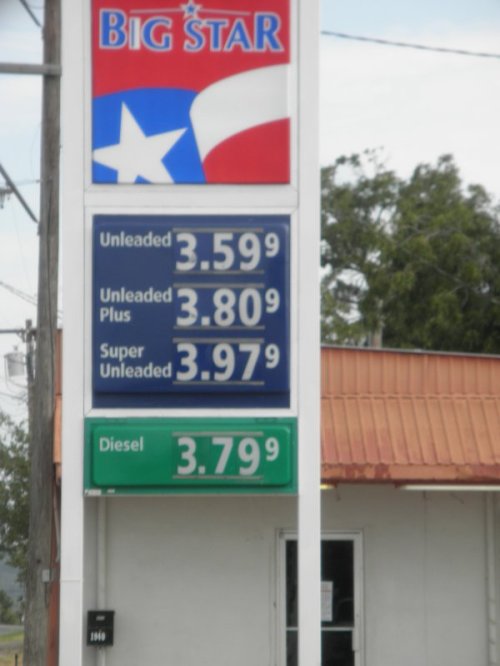 So, I’m free.  Got time to kill, a whole town to stick my nose into.  Gas gauge is showing empty, so first I swing in for a tank of cheap petrol.

$50 later I drift over for five minutes of free prayer and a Kow Kick.  Hadn’t done any gratitude affirmations yet about jury duty being cancelled, and a non-Christian doesn’t get many offers for free prayer.  Much less with a Kow Kick thrown in.

Sooooo. Off to the city park for a while, spent an hour or so in the graveyard, which is cool, had some Lum’s barbeque, examined various historical markers.  All of which I’ll report to you in loving detail during otherwise dull moments of the future.

Meanwhile, feel free to forget.  It’s surprisingly uplifting, cleansing, and clears the conscience of all that guilt for trying to exploit the dead.  Helps make a classy individual of you.  Might make people believe you’re intelligent, well-rounded and capable of thinking for yourself.

While we all twiddle our thumbs in anticipation waiting to hear whether Old Jules is giving the lawyers a bad day or has gone fishing, here’s a very brief update from me, Jeanne.
I just realized I never showed you the final version of this particular mandala that I was working on in June, so here it is: 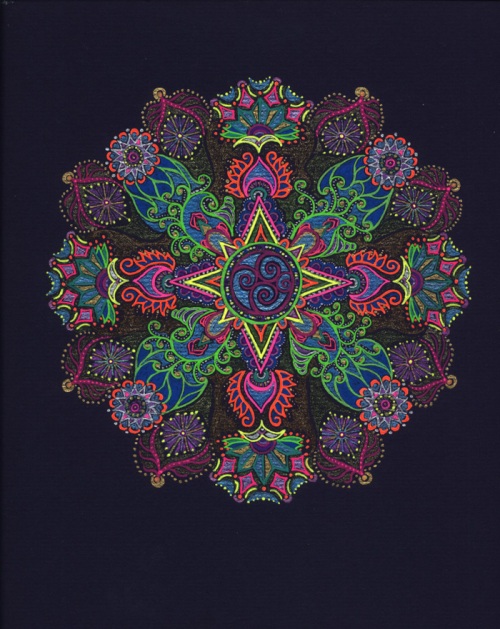 Those little shaded areas are actually a clear metallic ink.

I  completed four good-sized works in June and July before I went on vacation. I’ll put the others up at some point, or Old Jules will.  I entered an exhibit application showing those other three as examples of my work, and if one of them gets chosen, I’ll get that one matted and framed. I’ve been in the exhibit before, which is held in a local nature center building, but I haven’t heard anything yet for this year.  I like this one because they let you put prices on your work and the Parks and Recreation Dept. actually makes some purchases themselves for their buildings throughout the county. So we shall see. I’ve never won any prizes or sold anything through this exhibit, but the judge this year is affiliated with our  Nelson-Atkins Museum of Art (Kansas City, MO), so it makes sense to let one more art professional  see my stuff.  Usually the winners from this show are either doing photography or have some 3-D element in their work.

I took 2460 photographs on my trip, most of them in Oregon and Washington. If you want to connect with me on Facebook, you can see some of them (I’m there as Jeanne Bangs Kasten). There were some really great photos because I got a new camera, a Canon Powershot Elph somethingorother.  Even just set on automatic, the pictures were great. I took pictures at Breitenbush Hot Springs, the Oregon beach, Tacoma, WA, Mt. Rainier, Ballard Locks (Seattle) and the Dale Chihuly Museum at the Seattle Center (right by the Space Needle). I have a ton of scenery and greenery photos, and I have an obsession (apparantly) with running water scenes.  I haven’t passed on very many to Old Jules yet because it involves either re-sizing them all or putting them on a separate flash drive.
Well, back to work!  And the rest of you can go back to twiddling your thumbs.
Jeanne

Done Deal Down in the Middle of Nowhere

Didn’t require many miles to discover I’m gonna need to install some helpers for the rear leaf springs.  Or replace the old ones.  A cross-wind at 55 adds thrills a person couldn’t find on a drag strip or Daytona speedway.

Now, whenever this is, I’m going to have to see if it will climb back out of here, drive over to the County Seat at TimeWarpVille, Texas.  Maybe turn loose a few criminals if I get selected for jury duty.