Another Newbery.  Kids, back when kids still played outdoors unsupervised with other kids.  When they still dreamed their own games and played them.  Still went door-to-door a few at a time knocking on doors on Halloween.

But almost the end of it, and Snyder manages to catch the seed of why in The Egypt Game.  Partly it was computers, of course.  But, despite the fact it’s a book for kids, a threat haunts the wings and the sidelines in this one, and the threat rhymes too well with what was still in the future in 1967, to be much fun.

A kid changes towns and schools, comes to live with a grandma while her mom takes a run at Hollywood.  Seriously.  Naturally the girl is infatuated with what she left behind, the glamor of mom’s aspirations.  And naturally the kids around her aren’t overly impressed.

But grandma lives in a stack of apartments and some of the units have kids her age and proximity demands they become friends.  Basic setting.

The Hollywood girl has imagination, though.  She finds a vacant, private lot with a storage building behind an antique store with lots of the kinds of artifacts kids once couldn’t resist.  She and her friends begin the Egypt game, building a shrine, creating rituals and donning costumery.

But they’re being watched from a back room window in the antique store by a man everyone in the neighborhood’s afraid of.  Not because he’s done anything sinister, but because he’s definitely not sociable.

Meanwhile a kid is murdered in the vicinity and parents batten down the hatches, demanding rules be followed and a lot more supervision be adherred to.  The Egypt Game continues, but it goes further underground.  Still watched through the back window.

But somewhere toward the end things manage to turn around in a way to make this plot refreshing, a ray of sunshine where today, most likely, it would go an entirely different way.

A nice read.  Adults will get a smile, kids will probably remember it.  Not as long as they’d remember Charlotte’s Web, or Stuart Little, maybe.  But they’ll probably recall it for a while.

I used the Vietnamese Pan-something-or-other fish I told you about on earlier posts.

Bed the bottom of the pan with half-dozen corn tortillas,

You can be the second person in the Universe ever to try it if you hurry. 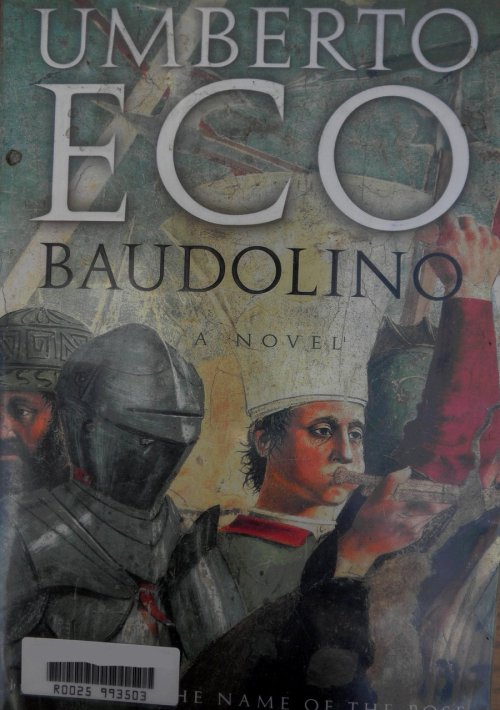 Don’t expect the earthquake power of The Name of the Rose in this one.  Don’t even expect the addictive confusion of Foucault’s Pendulum.  Umberto Eco never does the same job twice.  After he’s done it once it doesn’t need doing again.  Even though the reader-heart might hunger, grovel and beg.

So the monastic whodunit, the Dante-esque tour through a maze of mist and myth are replaced by the subtle, savage Eco wit, a God’s Little Acre fantasy, and inevitable, once again, awe.  Where the hell does a writer such as Eco come from?  Why can’t I create characters, plots, webs of credible craziness to challenge dreams and nightmares?

For instance, near the time of the 4th Crusade sack of Constantinople:

“[I] told the whole story to my father Galiaudo who said you big booby getting mixed up with sieges and the like one of these days you’ll get a pike up your ass that stuff is all for the lords and masters so let them stew in their own juice because we have the cows to worry about and we’re serious folk forget about Frederick, first he comes then he goes then he comes back and it adds up to fuckall.”

Yeah, we’re talking the 4th Crusade.  It ain’t enough Baudolino, a peasant lad, befriends Frederick Barbarossa, gets himself adopted and sent off to Paris for schooling.  Eco’s not going to be satisfied until he can rain it down knee-deep.  He sends Baudolino off searching for Prester John, where plots, characters and settings have some elbow room.

Gargantua and Pentagruel, by Umberto Eco, more-or-less.  If you can’t laugh until you cry reading Rabelais, you’d best stay-the-hell away from Baudolino.  But if, on the other hand, you can, if you’ve done it so many times you roar when you notice Gargantua on the bookshelf, you need Baudolino.   And quite possibly some professional help.

A damned good book.  A keeper.

The role-models offer a clue
While naming only a few:
Bush, Reagan, [post-Dallas]
And Billary’s palace:
Spit polishing won’t make it new.

Minnie Mouse can be open-minded
And wabbits can sometimes be blinded
By synthetic passion
Of this or that fashion:
Uncle Scrooge accepts plastic! [Reminded!]