Hi readers. Thanks for coming by for a read.  A few days ago Jeanne decided to give me a shot of rare pleasure.  She took me to my favorite place in the Kansas City area:  A giant Asian grocery store.

As we entered the large vestibule at the entrance I noticed large ceramic pots for sale and the one below caught my eye.

I walked over for a closer look and called to Jeanne.  “Look at this!”  Pointing with my cane, “These are petroglyphs from the US!” 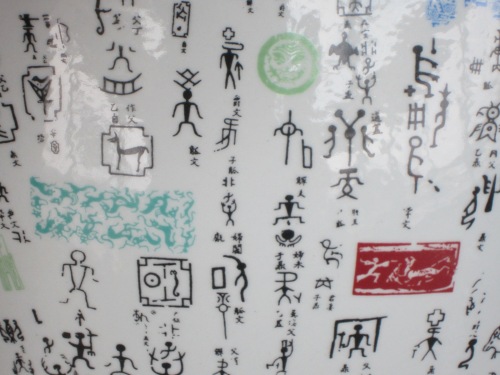 Then he pointed inside the pot and shouted, “Look!”

So the burning question is, are Asian petroglyphs so similar to Native American petroglyphs as to be indistinguishable from them?  These pots seem to be decorated with some symbols definitely not Native American, mixed promiscuously with reproductions of petroglyphs I’ve seen countless times in New Mexico and Arizona, Colorado and Utah.

It’s clear no matter what the answer might be that Asians have gotten the jump, however, on the ceramic petroglyph trade.

If I had someplace to put one of those pots and something I wanted to put in it and $100 lying around with nothing to do I think I’d just buy one of those pots.  And maybe haul it over to Zuni or Acoma to give them a looksee.  The tribes have been losing business to Asians copying their fetishes, their kachinas, their other crafts for a longish while.  Maybe a bit of reversed engineering of petroglyph covered pots  would provide a shot in the arm for them.

Aside from the fact nobody’s likely to buy some damned pot covered with petroglyphs.

I respect Native Americans and other minorities because it’s so dehumanizing.

Imagine it readers.  Someone saying aloud, no hint of humor, “I respect white people!”  Imagine that bullshit.

Now, turn that around and imagine you’re hearing what you’ve heard a thousand times from the lips of a white person speaking about this or that minority group.  Or women.  [Parenthetically, I think males, especially white males, are the minority in the US gender-wise.  I haven’t checked the statistics, but I recall somewhere women live longer than men because they don’t have the stresses, wars to fight, and don’t have to do the hard, dangerous work all us men do just for the fun of it.]

Anyway, think of it.  Suppose you were a self-respecting US citizen of color, and some white person said to you, “Hey man, I respect blacks.”  Do you suppose he’ll just figuratively roll his eyes back into his head and grunt?  Or will he say, “Just what the hell are you talking about you freaking lying hypocrite?  You believing your own bullshit again?”  Because it ain’t like he’s been living on the moon.  He’s living in the world where the prisons are full of black males, where black males are gang banging, selling black women off to prostitution, and strutting around being proud of it.

How the hell could anyone except some stupid white person insult, dehumanize decent black people who aren’t doing those things by saying he/she ‘respects’ generic, stereotyped, cardboard cutout blacks?

Same with Hispanics.  The only Hispanics a person could claim to respect and mean it across the board are the ones illegally crossing the US/Mexico Border to work their asses off for peanuts doing anything lazy assed US citizens don’t want to do.  But just saying, “I respect Hispanics,” is to stereotype them in a way any fool knows is a blasted lie because it simply isn’t possible in the real Universe.

It’s a similar with Native Americans.  That’s because the insult is compounded, squared and cubed.  Probably 90% of people guilty of even thinking such assinine thoughts have never even spoken to anything remotely akin to whatever the hell they think a Native American is.

And they’re damned well sick of being dehumanized by being respected by them.

Hell they just want to be like us.  You can’t blame them.  Who in the world doesn’t want a piece of the best sociology, culture, society, music, attitude, behavior, the US has to offer.  The centerpiece for the cultural best has to be exported for the advancement of humanity.

But there’s not room for two.

People in conquered lands always want to imitate the conquerers.  That’s why British all try so hard to behave as though they’re Normans.  And [East] Indians try so hard to be good Christians.

Same as the whatchallem, Native Americans who aren’t whites, Mexicans, Blacks, Asians, and such.  Aboriginals, they’ll likely want to be called sometime. Tribal Americans, some other time.

The Rooskies have always been good at gangsta, but they always felt something was missing over there in the KGB, GRU, and up in the Gulag.

We haven’t gotten around to conquering Pakistan yet, but maybe dropping a few cruise missiles and drones down their smokestacks was enough.  Bound to be an explanation and drones might be it.

Australian aboriginals get into the swing about as well as a person can wish.  Hard to find fault with that.

All in all I’d say this fits the 21st Century better than Christianity fit the earlier ones. 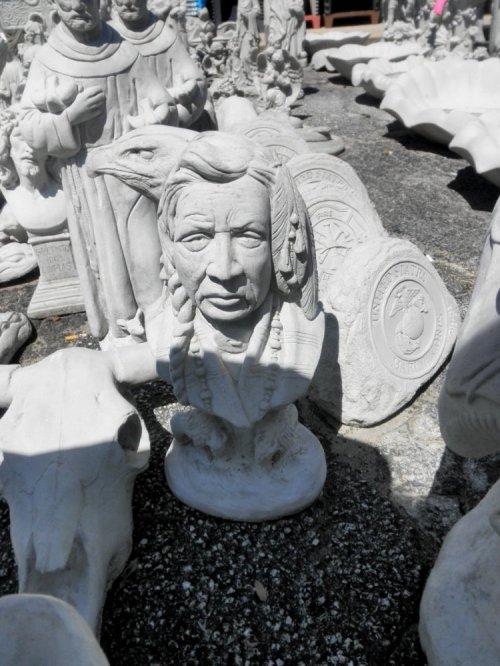 A few old guys of the same species sitting around Kerrville, Texas wondering where the world went.  Each too different from the others to guess which parts they missed.  Old guy the others knew walked up and sat down.

Silver gray hair in a ponytail, 70ish, shorts and sandals with athletic stockings, heavyset.  We shook hands and I studied his features.  In Texas he looked definitely out-of-place, though he could have been Hispanic throwback gene pool.  But something in the features and skin pigment had me suspecting he was a Navajo or Apache.  A curiosity because Native Americans aren’t much drawn to Texas as a home.

Finally my puzzlement got the best of me.  “Where are you from?”

“Yeah, but what TRIBE Swedish?”

Minneconjou Lakota, it turned out.  Born in a US Public Health hospital on the Rez in Minnesota.  Mama a party woman, no idea who his pappa was.  Reared by his grandma, then sent off to Indian School.  Learned to be a welder and pipe-fitter.

By 1970-or-so he was up in Alaska on the North Slope a few years building the first Alaskan pipeline across the permafrost.  Had a few stories to tell about that, then all of us began picking his mind for all manner of details.  “How deep did they have to go setting the pilings holding up those pipe joints?”  “How were you housed?”  And so on.

Turned out all the oil from that field was shipped directly to Japan.  US refineries weren’t tuned to that sort of crude.  But the fields are still producing.

Guy has a tribal census number, but never went back to live on the Rez, but visited his grandma there until she died.  Brought tears to his eyes thinking about her.  Never used the free health-care/dental-care for life benefit available to him because of the tribal census number US Public Health Service offers.

“I worked hard all my life and settled here.  Paid my own way every step along.  Making a lifetime job of being an Indian didn’t appeal to me much.  When they quit shooting us they tried to offer that as the next best thing.

“They’re still trying, got all those liberal white people to worship blanket Indians.  Better than getting shot, but not as good as kicking the whole damned mess.”  He shook his head.  “Damned white people and their congratulations for being victims will finish off all the ones left.”

Nice meeting him.  I hope I see him again before I head for the tall timber.  Being born into a trap doesn’t mean there’s no escaping it, I reckons.

I wrote this after a weekend spent with a once-lady-friend who spent her career as a high school librarian on the Navajo and Zuni Reservations.


A schoolmarmish lady in Zuni
Had canines subversive and loony;
Her Communist felines
Made neighborhood beelines
With doctrines both outworn and puny.

The KGB cat was a lean
And speckled-nosed beauty serene
In appearance alone
For her countenance shown
Multi-faceted plots as she preened.

Her Weathercat history was tops:
She sprayed on dozens of cops
With a Commie aroma
But joined Sertoma
Cavorting with phonies and fops.

The ringleader hound was a red
And curly haired rascal it’s said
Whose Trotskyish leanings
And Maoish gleanings
Were pondered curled up on the bed.

Princess Redfeather, they tells
Of this curly red bitch of the cells,
Forsook her fine lineage
To sip of the vintage
of Lenin, and Gulags and hells.

The worst of the felines, Bearboy:
Striped and cross-eyed and coy;
Politically weak,
Had claws that could tweak
Bourgeois carpet, and bedspread, with joy.

The Uncle-Tom dog of the hut
Was Ernie, the gray-bearded mutt;
Dog-tired, and dogmatic,
He thought,”Problematic:
dog-eared dialectic and glut.”

The Uncle-Tom dog she called Ernie
Began as a dog-pound attorney
Commuted from gassing
He pondered in passing
Discretion’s demand for a journey.

A calico hound lying dormant,
Most likely a police informant:
A capitalist clown
Took his food lying down
Resisting the commie allurement.

The Stalinish kittenish spies
Spread foment and torment and lies
To Indian curs
And mutts that were hers
And War-Gods high up on the rise.

Princess and Ernie and, Spot,
And Chester, the narc-dog; the lot:
For half a piaster
Would bring a disaster
To Zuni, once called Camelot 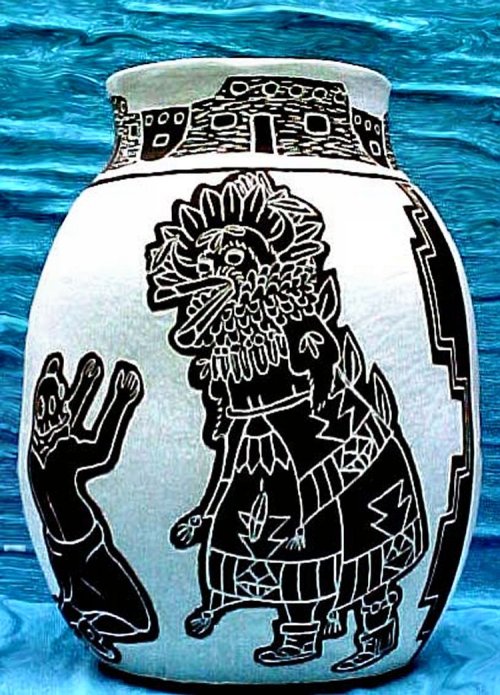 Bringing civilization to Native Americans was never easy.  Almost every step of the way the tribes selfishly hoarded the lands they depended upon, frequently resorting to violence when whites who needed the land for farming, ranching and mining tried to run them off.

One example was the Modocs in northern California, 1852.  The US suddenly owned the land, having disproved the false claims by Mexico of ownership by invading them and killing as many as they could catch.  But the Modocs were spoiled by being owned by Mexico, being mostly left alone.  When whites came into the Tule Lake area the Modoc slaughtered 38 innocent people.

Ben Wright and a group of miners from Yreka, California attempted to peacefully resolve the situation by having a feast for the tribe, but almost to a person the Modoc unreasonably refused to eat the poisoned food.

Wright and the miners were forced to fire into the mass  of tribal members, which allowed a third of them to escape.  That failure led to decades more of Modoc attempts to halt the march of civilization and disputing rightful white claims to the land.

Not until 1873, after seven months of hard fighting and the loss of many innocent white lives were the Modoc finally subdued permanently and the leaders hanged.

A microcosm of the history of the western US where flawed and improper leadership and planning resulted in the needless loss of innocent white lives.

The Ruin Skull – A Long Day Ago

Those killers
Didn’t kill the slaves
Took them away squat beneath
The loot the weight of
What they carried off
As they did before for her,
Before emancipation
To slave for someone else.

Arroyo cut through ruin
Showed her to the wind and sky
And me a thousand years
After noise and smoke
And screams
Stone hatchet broke the head
Flames brought down the roof
Around her,
Her and her kin
Charred corn
Still on cob
Beside her skull.

She died and partly burned
A long forgotten civil war
Between someone
And someone else
No one remembers
Over something
Neither wind nor sun
Nor these charred bones
Remember.