Unrequited Requiem for a Chicken

She was always crosswise to the world, even when she was just a pullet, just beginning to free range.  That’s her going back into the night fortress.  It wasn’t more than a week after this picture was taken the guineas decided to sleep in the trees and she decided to join them.

Every night I’d have to turn a water  hose on her and drive her around up there until she gave up and reluctantly came down to join the others out of harm’s way.  As she matured she always reminded me of a woman I used to spend some time with in Socorro, New Mexico, called herself a Cholla.  A consistent pain, pleasing to the eye but always in the wrong place, always ready with a dagger.

Yeah, this chicken sorely tried my patience in every way a chicken could from adolescence to full maturity.

So last night when she wasn’t there for the headcount I assumed she was pulling her favorite evening trick, waiting until all the others were locked down for the night, then coming in panic-stricken, pacing and fussing in mock terror until I re-opened the fortress to let her in.  But she never showed up and I was secretly glad.  I searched around with a flashlight after dark for a while, thinking she might have gone broody outside, or decided to roost on a treelimb.

Ha!  Nowhere to be found!  Ha!  Coyotes have been calling in close nights lately, so I figured between coyotes and coons that lady was going to pay the price of freedom.

This morning before daybreak I put together a post entitled, Requiem for a Chicken.  Said some nice things about her, partial, selective truths.  Then, in the false dawn I went out and released the main flock, did another headcount as they emerged, just to make sure.

Next I went to the old fortress and cage where I keep the other two roosters separately penned.  Out they came, and there she was.  I don’t have a clue how she got in there. 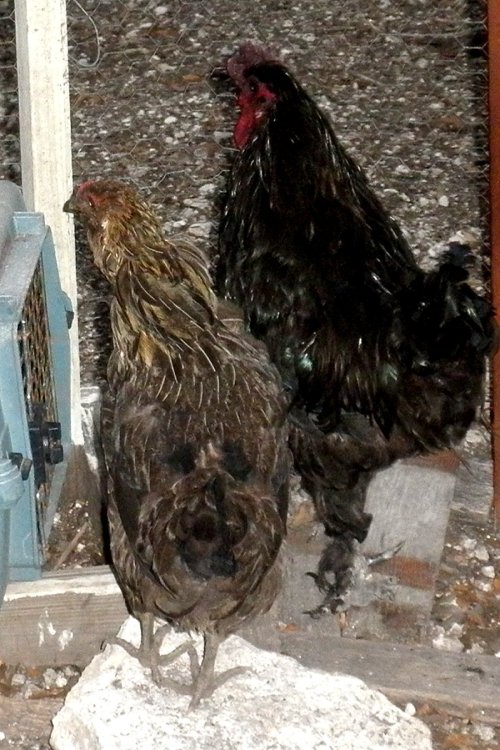 Always in the wrong place.

So you hate him.
Wish him ill.
You have a problem.
If he could only feel
The fear, the doubt, the horror;
If he could only satisfy your
Yearning
For him to feel those things
He might do it.
He might.
If he could only understand
How much it means to you
To cause him pain;
With what a flood of anguish
And venom you despise
Hunger his agony
And want to be responsible;
Want him to know,
He certainly might try.
But, he can’t.
Despair’s no longer sexy
To those who’ve seen it naked.
Fear cowers under a straight,
Steady gaze.
You’ll have to offer something
More frightful
Than your silly rage;
Your idealized terror;
Something more dismal
Than your impotent concept of
Emptiness;
Something with more substance
Than your scorn;
Something more somber than you
Think death is
To make him care.
Life will hand him defeats
His days will serve up
A ration of pain
He’ll deal with them as he must
And always know those blows
Aren’t yours.
They’re just life.