Ruidoso Steak-House
Glanced at her reflection
In the plate-glass window
New squash-blossom turquoise
Sassy Stetson
Patted 50ish blonde curls
And wished
They’d eaten at the casino
Where this didn’t happen
Wrinkled pretty nose
“Don’t give him anything
He’ll just get drunk!” Stage whispered
To her Houston lady friend
As though he wasn’t there
She was right of course
Except the old man Mescalero
Was already drunk
He turned away
Then turned back and mumbled
“Sing the Song of Life each day
Or when the time arrives you won’t know how
To sing the Song of Death.”

Two years ago these were healthy trees.

About a year ago the trees in the vicinity of the cabin began dying.  I’d been fairly certain it would happen because there’s a grove immediately above about 100 yards that had all died off two or three years ago.  It appears to have started at the power line easement atop the hill and is making a path of dead trees moving east, or downhill. 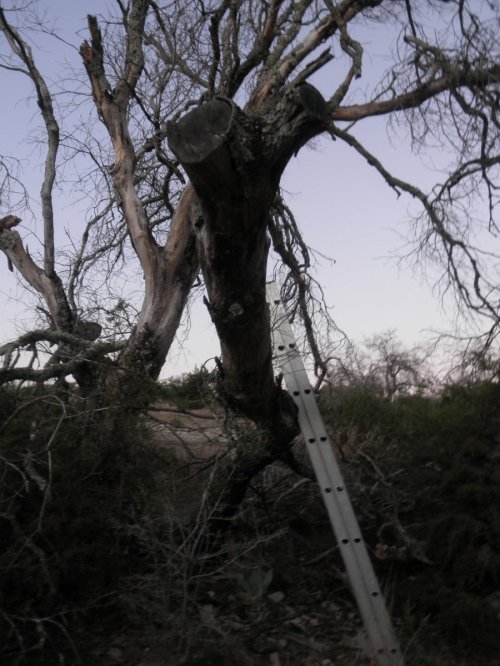 Conventional wisdom is that it’s Red Oak Wilt, or Red Oak Disease.  There aren’t a lot of certainties about it, no preventive measures or cures anyone’s aware of. 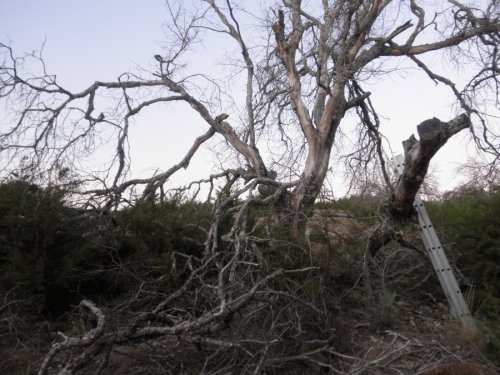 Over the space of about a month they lost all their leaves and the bark began separating from the wood.  One of the problems with trying to get them down is the abundance of wasps making nests between the wood and the bark.  Hundreds of wasp nests and clouds of angry wasps.   The temptation is to wait for a cold day.

There was a certain amount of urgency about trying to take some of them down because after Oak Wilt kills a tree the first strong wind often brings it down.  Evidently the disease rots the root system long before anything shows above ground.  Several of the dozen-or-so trees dying immediately around the cabin and outbuildings actually have large limbs hanging over roofs.

But the nights are cooling enough to send the message it’s time to begin building a pile of firewood.  It won’t take much hauling this year.  Some of it I could almost cut and allow it to drop down the chimney pipe.

The larger trunks are going to be a major undertaking to split, so I’m thinking I might sawmill any of them with potentially good lumber left.  Sometimes Oak Wilt rots out the center too badly to leave anything worth using except to burn, but sometimes it leaves the heartwood almost untouched.

If there’s enough capable of being sawmilled it might provide enough oak for a project I have in mind cut relatively thin into planks usable for building a structure.  But in any case it ought to stay toasty inside the cabin this winter.