I want to do a post on human bullying, but yesterday and today I’m leading into it with more important issues, namely the way the creatures I observe every day interact and the shifting bullying behavior among them.

I’m only going to skid across the surface of it, but I don’t want to digress and find myself up to my neck in human bullying issues without first briefly having laid the groundwork among the kinds of creatures people probably learned bullying from.  In this case, cats and chickens. 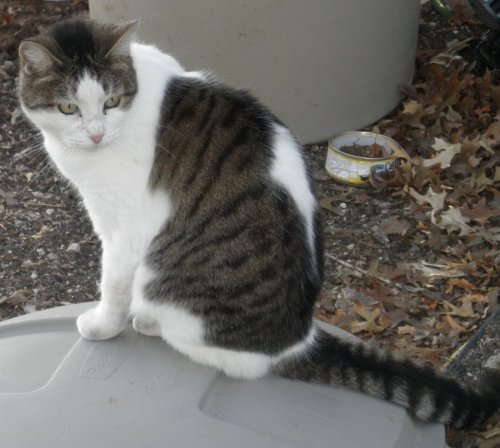 This is Tabby, daughter to Shiva, the Cow Cat.  Tabby’s the youngest cat around here, always reckless, always strong-willed and independent, always one to avoid conflict.  She’s always been demanding of attention and affectionate.

But for the past month she’s suddenly become the bull-goose bully around here, beating the hell out of the older cats including her mother, Shiva.

This is Shiva the Cow Cat.  Mother to Tabby, probably hatched around 2000, wandered into proximity with me around 2002 as a stray.  Jeanne carried her to Kansas with her where she lived a few years and had a litter including Tabby.  Around 2005, she and Tabby drifted back into the mix in my life.

Shiva’s never wanted much attention, only a daily stroke and scratch behind the ears to acknowledge I knew she was around.  But her main joy in life was taking walks with me in the woods, sometimes accompanied by Tabby.  When there were cows on the place Shiva took a lot of pleasure helping me chase them off, sometimes almost getting underfoot of them in the process.

But she was weakened a couple of years ago from some illness almost killed her and she’s never completely recovered.  Sometimes she’d still like to take woods walks, but Tabby’s put a stop to it, and generally with the walks with cats, by attacking her and driving her back to the cabin.  That ends the strolls for both of them.

This is Niaid, littermate to Hydrox, but without a contract.  The old friend who loaned her to me shortly after she was weaned was murdered a few years ago, so she’s in an awkwardly poor-relations status.  She’s part of a 1997 or 1998 litter, but she’s still the hunter/gatherer of the place.  Even travels through the woods up to Gale’s house as nearly as we can figure, to catch rodents in his chicken pen.  She was never a bully, but she could always take care of herself.  Now Tabby’s beating hell out of her, too. 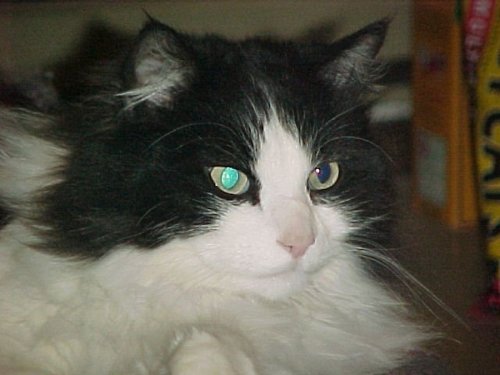 This is Hydrox, littermate to Niaid, 1997-1998 vintage.  He used to have aspirations for being Top Cat, he and I both figuring he’d take over the boss-man job around here if I die before him.  But he’s sort of lost interest in all that the past year, become satisfied to just lie around and let things happen.  Aside from a daily hissing-swatting-spitting match with Niaid he doesn’t get involved in the social climbing and networking.  He’s the only one Tabby’s not bullying yet.

As I explained yesterday, the chickens bully all the cats, though Tabby’s become more prone to put it to the test, locking eyes and playing out the last scene to The Good, The Bad and The Ugly with them.  But she still backs off when someone has to.

Meanwhile almost all the deer have become a lot more aggressive, challenging both cat and chicken in standoffs they always win.  A cat sleeping out by the garden’s liable to find itself nose-to-nose with a deer, then shoved, then chased back to the cabin.  Or a chicken, deliberately knocked ass-over-appetite by a deer with a sudden urge to scurry off.

This is almost certainly a lot more information than you think you need to know about the animals around here, as well as the social life.  But I think some of it applies to how humans interact in human environments and I might use some of what goes on among these creatures as a platform for discussing human bullying patterns.