For Want of a Nail – Something Worth Knowing Chainsaw-wise

If you own a chainsaw and it has a primer plunger or bulb similar to the one above you might give some thought to keeping a spare around.

I’d barely started cutting when this one developed a crack and allowed air into the fuel line.  I shrugged, puzzled over possible ways to plug the air leak and decided it probably couldn’t be done because of the oil and gasoline.  So I asked Gale to pick one up for me in Kerrville the next day.

The place he went had a bag of these things of 87 different sizes.  It wasn’t enough to know the saw model and make.  No way of matching anything without the actual item to compare it to.  So a $5-or-less has now taken several days out of getting firewood cut and those dead oaks threatening buildings and roofs onto the ground.  Oak Wilt, Firewood and Sawmilling 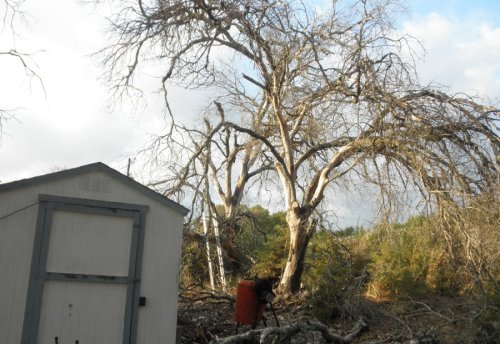 There’s no wind today and I think if it weren’t for that piece of plastic I’d have both of those down and cut to firewood lengths by mid afternoon.  I’m going to pick up a spare when I get a replacement.  That saw’s got a lot of miles on it and it’s been a good one, but maybe it will figure it can’t die final-like until it wears out that extra primer plunger bulb.  Cheap insurance.

And if the saw goes kerplunk and leaves me with one of those little hollow plastic bulbs on my hands I can probably rig a way to use it for something else if I live long enough.

One more bug on the windshield of life.

One of the better songwriters of the 20th Century is turning 70 today.  I’d wondered for a number of years whether I’m older than him because of the song, Texas 1947.  I figured he must be slightly older, but not by much.  When Jeanne sent me an email telling me it’s his birthday the question was answered.  A year and a few days.  He’s another young guy.

This next one appears to be one of the performances when he was on the road with Townes Van Zandt.  I’m just guessing about that.

I can’t even recall how many performances by Guy Clark, and Guy touring with Townes I’ve seen in my life, but every one was worth the price of admission.  Even when Townes was so far down the downhill slide watching him brought some pain.  Those years they could bring in a house of 150 or so when they came to Austin.  Just about enough to fill up the Cactus Cafe at UT Union building.

LA Freeway’s one of those songs I used to have as the single song on a 90 minute tape played on long road trips.  I never tired of it.

Guy’s evidently a fine craftsman, makes all his own guitars.  I gather he’s also built a boat, or two, but I’ve always preferred to think he was talking about more than boats in this song.

I’ve always thought if circumstances had been different and I’d managed to come across Guy Clark somewhere when we were both young we might have been friends.  As it is, I suppose I think of him as a friend anyway because of all the joy his songs have given me over the decades.

What more can a person say?

I don’t recall ever seeing such an abundance of flies in Texas.  I first noticed it a week-or-so in Kerrville in a restaurant.  Flies were buzzing around the place in such profusion the customers were waving forks and dinner rolls in the air trying to drive them off.

Then I began seeing them here, hanging around the windows and door, waiting for things to happen in their favor.  I usually think of fly problems in a context of fly-breeding sources, so I checked the chicken roosts, figuring I’d allowed the droppings to build up enough to allow fly eggs to hatch and go through their development cycle.  Not so.

But up at Gale and Kay’s house a few days ago I saw they were similarly blessed.  Plenty of flies to go around.  Enough for most usual purposes.

Yesterday, or the day before they began finding their way into the cabin.  They weren’t docile enough to allow chasing and swatting as an option, and I’m not all that big about having flies walking over my face while I try to sleep, type, or meditate.  The military surplus mosquito net head-cover I’ve had for thirty years or more works as well as anything I know of to keep that from happening.

I’m a person who tends to believe most things are indicators of other things, but I haven’t a clue what this is an indicator of.  Probably someone somewhere would say it means we’re going to have a hard winter, or some other unusual kind of winter.  Usually Texas has a few flies and they’re worse in the fall season, but on its worst day this part of Texas usually can’t compare to a normal fly-day in the high desert country.  Desert flies converge on perspiration and any other water from miles around.

Swatting Flies in the Last Century

But this year Texas can brag it has something to compete with New Mexico.  Rich folks from Houston and Dallas won’t need to go to Ruidoso, Eagle Nest and Taos to have as many flies as they hanker to have crawling around on them.