Pack Goats for the Elderly and a Youngish Hermit 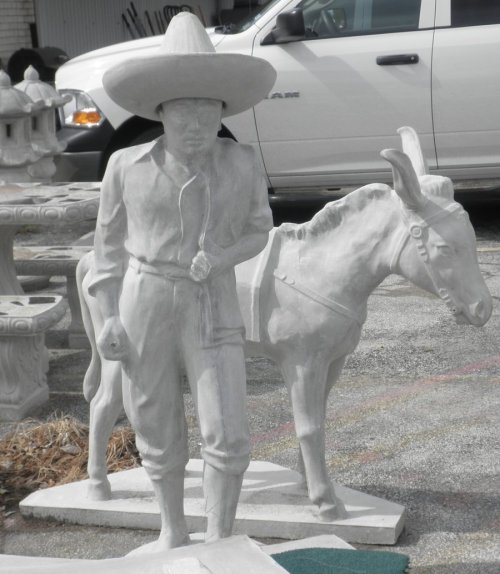 I didn’t know I was joking when I composed this post a couple of days ago.  But even though Jeanne’s visited me here and knows me better than anyone else, when she read it she thought it was so outrageous I must be joking.  After I explained I was serious and consider it a viable alternative she thought about it a day and just told me again she likes the blog entry as a joke.  But she’s really uncomfortable about the concept as a serious possibility I might try living this way.

So I suppose I must be joking unless I decide it’s the right way to go.  But I’m concerned about the bearings on bicycle wheels.  I’m thinking maybe light motorcycle wheels might hold up better:

The financial constraints involved in trying to get the old F350 capable of pulling a travel trailer and the unknowns involved in why it was left on this place when Gale and Kay bought the property are seeming a bit overwhelming at the moment.  That, combined with the uncertainties of whether I can find an old travel trailer I can fix adequately got me thinking about this.

A couple of years ago when I thought my life might proceed differently than it has, there was a middling possibility I might have an extended trip into the high mountains left in me.  My thought at the time was to spend a month or two in the Gila Wilderness in the immediate vicinity of the Continental Divide.

But at that altitude and the years creeping up on me, combined with the length of the stay that would be required, caused me to think I didn’t want to do it carrying a backpack the way I’ve always done in the past.  My initial thought was a burro, but the fact is hauling a burro’s a bit of a problem.

A few times in the mountains, decades ago, I encountered packers with llamas and talked with them about it, but those animals are as difficult in the size department as donkeys.

However, I ran into someone once in the Gila with a string of goats doing the packing.  Goats, to my way of thinking, have a lot of advantages over the larger animals insofar as transport.  Considering it led me to join some Yahoo Goat Packing groups:

NotYourUsualGoatList · http://pets.groups.yahoo.com/group/NotYourUsualGoatList/
packgoat · All Things Packgoat
http://pets.groups.yahoo.com/group/packgoat/?yguid=320352404
I began doing some shopping around looking for a couple of young goats I might train, but intervening events led me to see that another long trip into the mountains isn’t in the cards for me in the immediate future.  And further consideration about that particular use for them in that area also mightn’t be the best.  They’d be a magnet for large predators, risky to leave unattended, and they’d need a lot of attention.
But thinking about pack goats during the years since has caused me to think there might be a role for them to play in a more urban setting.  Namely, for older folks who could hike to the store for groceries, but have difficulties carrying them home without a vehicle.  Maybe a goat cart, for that matter.

http://www.goatworld.com/articles/purpose/goatcart.shtml
Feeding them would be no problem because goats will eat just about anything and thrive on it.
But a pack goat would provide a lot more mobility than a shopping cart for people living on the streets and under bridges, as well.  A goat can go almost anywhere a person can, climb into places where a person would have a lof of problems climbing into.   The ability to easily move residency out of the clusters of street people living under bridges would keep the owner out of police sweeps, out of reach predatory humans preying on the people living under those conditions.
In fact, I’ve been acquainted over the years with several people living in small house-wagons traveling around pulled by burro-power as a lifestyle and talked with them about it at some length.  It strikes me a person with a willingness to walk alongside the contraption instead of riding in it might actually be able to construct a small, light house on an aluminum frame with bicycle wheels sturdy enough to carry everything it took to live, move without buying gasoline, big enough for four cats.

Maybe something along these lines only larger

Something large enough to haul some luxuries such as a camp stove, some groceries, a place out of the weather, but small enough to get out-of-sight come nightfall.

Nothing as big, or elaborate at this, but something a lot lighter a couple, or four goats, maximum, could pull.

Maybe about that size, but constructed with bicycle wheels, ball bearing axles, built on an aluminum frame from salvage aluminum rails and door frames.  Actually aluminum mightn’t be durable enough as the frame.  Maybe steel bed frame angle iron frame as a base for everything above aluminum.
Equipped with photovoltaic charged LED lawn lights to allow night reading, cooking, etc, a chuck box and a small gas fridge.  Maybe a guy would have to move up to a pair of donkeys to pull it.  But maybe not.
I’m thinking maybe two bicycles welded outside a steel bed frame with a tie-rod between the handle-bars behind a yoke might serve, and a swiveling tail-wheel [bicycle wheel] to stabilize the weight and balance on the overhang behind the two rear bicycle wheels might be a good starting place visualizing the possibility.
I’m going to have to puzzle about this more as a potential way to keep living without going under a bridge if circumstances demand I have an escape route.
But here are a few other concept pics from the Practical Action website, Cabelas, and elsewhere, just to remind myself of the directions my mind’s going on all this: 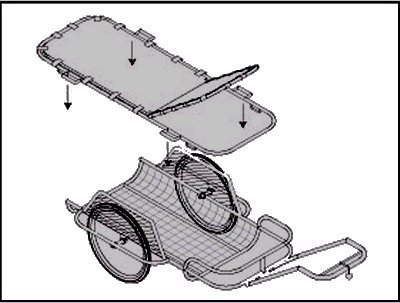 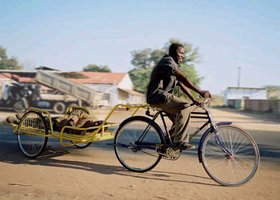