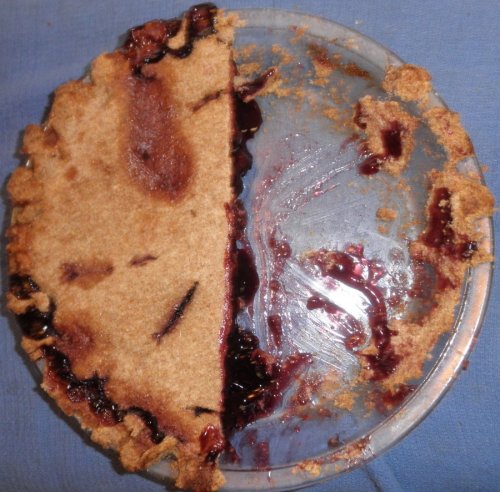 About 55-60 years ago I had an experience with cherry pie I thought had ruined it for me for life.  The rodeo in my town was a community affair, had events such as greased pigs for the kids to chase around the arena with a prize for the one caught it, a calf with a bull durham bag containing a dollar tied to its tail, and a pie eating contest.

Might have been the year I was twelve we kids chased the pig, and were covered with grease and manure, then topped it off with the calf and more manure before we lined up either side of a table full of cherry pies.  We were to feed that pie to the kid across the table who concurrently fed us pie.

Across from me was a kid named Jerry Haynes, who’d been out front with the pig and calf, so his hands weren’t a pleasure to look at holding a piece of pie intended to be consumed.  But I gave it my old junior-high try.

And from that day until yesterday I’ve never since enjoyed the sight of, the taste of a cherry pie.

But yesterday Gale and Kay invited me up to share Christmas dinner with them.  Kay had made a pie, but had discovered she was out of white flour.  She’d never heard of anyone using wheat flour, but it was all she had, so she tried it, expecting it to be less-than-hoped for.  A cherry pie.

My heart sank a little when I saw that pie, not because of the crust.  But I took a piece of it prepared to do my best to enjoy it.   But instead of it being forced I was surprised with a crust with a nutty flavor and among the most enjoyable pie experiences of my entire life.  Absolutely delicious.

I’m thinking now it might have broken the cherry pie curse Jerry Haynes handed me all those decades ago.

So if you’re scared of wheat flour for pie crust you might be glad afterward if you take a shot at it.

Shame and a Confession About Inter-Species Sex

Good morning readers.  I’m obliged you came for a visit this morning.  In case you’re experiencing post-Christmas letdown this morning I’m going to indulge in a couple of guilt-ridden confessions to provide you a measuring stick so’s you’ll realize whatever troubles you have aren’t all that bad. 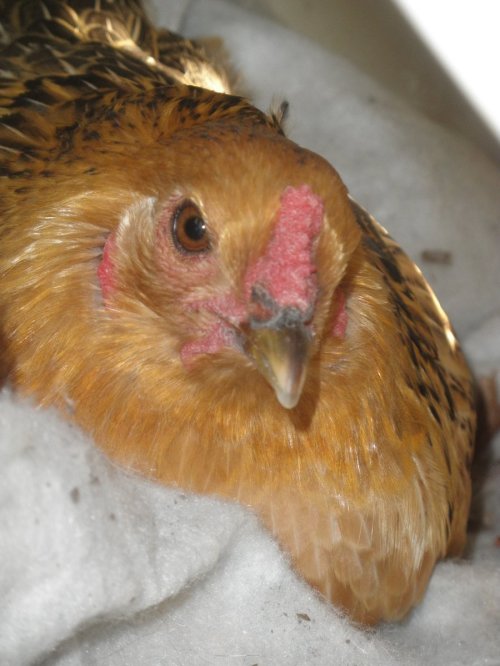 First I’m going to tell you something dawned on me about the Communist Americauna hen.  All my life I’ve known about clucks.  Everyone who’s ever been around chickens knows about them.  Every flock of any size has a cluck.

Farmers and town folks who’d lived on farms when I grew up had an expression, “Dumber than clucksh*t” as a means of describing me, frequently, and others of my ilk, and everyone knew the exact reference in the comparison.  A cluck is a chicken that’s crosswise with the world, with humanity, out-of-step with the flock.

I raised these chickens around here except for the Great Speckled Bird, either from hatchery chicks, or from eggs hatched by brooding hens.  I’ve always taken a great deal of pride in the fact I don’t have any clucks.  My flock is comprised of all good chickens.

But over the past few weeks something sinister’s been creeping into my mind.  I’m being forced to acknowledge the Communist Americauna’s a cluck, right here in MY flock.  Always has been.

So if you think you have troubles, if you had a war with your relatives over Christmas, if you bankrupted yourself buying doodads, if your dad didn’t like the gloves or socks you gave him, forget it.  Forgive yourself.  At least you probably haven’t raised up a cluck and had it right there in your life all this time without knowing it.

But as if that weren’t bad enough:

Now the inter-species sex confession.  That silky rooster’s always been a source of amusement to me.  Back when I had silky hens he fathered the other bachelor rooster here and was always good to the hens when he could catch them.

But now the Communist Americauna’s moved in nights with the two bachelor roosters this one’s become odd-man-out.  His filial son got the Commie.  When I turn them out he’s spending his time lying constantly claiming he found something good but the Commie and other hens aren’t paying him any mind.

The same people who used the word ‘cluck’ to describe me had another in their arsenal they used on me a little later, and it applies to this poor old rooster, too, same as it once did to me.  “Hornier than a three-peckered billy goat” crept into the language as I reached young-adulthood, and here it is again referring to this silky rooster.  I, at least, stuck to my own species and the opposite gender.

The guineas here came from the hatchery with a rooster chick for every four keets, the reason being guineas are braindead stupid and the only way they can learn to survive until they have a chance is having roosters to teach them the basic tricks like breathing, drinking water and eating.  All but two of those guineas got picked off by predators over time, but the two remaining still venerate the Great Speckled Bird and these two bachelors.  They listen to the rooster lies about what they’ve found and come running.  And when the roosters fight the guineas try to be peacemakers, interfering any way they can.

The other day I was outdoors and noticed the silky lying to the two guineas, which he’ll do, but then he started doing his rooster-dance and quicker than I can tell it spang mounted one of them.  And she cooperated.  An unsettling sight.

But then, somewhat later, Shiva the Cow Cat was down in the meadow digging one of her holes to relieve herself in when I saw the silky approach her, dance a couple of steps and he was on her so fast it took her a second to react.  She couldn’t believe what had happened, and neither could I.

Next thing I know he’ll be trying to mount my leg like some poodle dog.

So whatever problems you think you’ve got in your life this morning, console yourself.  It ain’t that bad, most likely.