When Pigs Fly – US Drone or Chinese Space Launch? 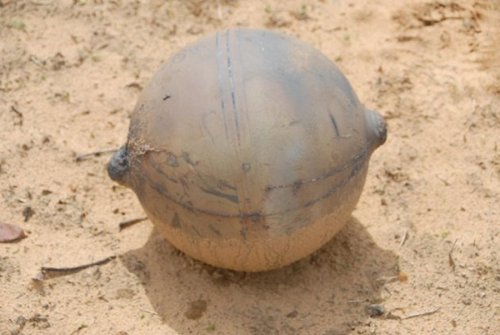 A large metallic ball fell out of the sky on a remote grassland in Namibia, prompting baffled authorities to contact NASA and the European space agency.

The hollow ball with a circumference of 1.1 metres (43 inches) was found near a village in the north of the country some 750 kilometres (480 miles) from the capital Windhoek, according to police forensics director Paul Ludik.

Unnamed Pentagon sources were adamant this is not a US drone.  “We’ve made a list of all our drones and checked it twice.  We are not missing any drones.”  He went on to observe, “The workmanship and metal quality appear to be Chinese in origin.  Unless we discover we’ve miscounted our drones we’ll continue to operate on the premise this object is a Chinese Space Program launch intended for Harbor Freight.”

Some skeptics are less certain.  A news release from a popular UFO debunking site offered the following analysis:  “It’s obviously the planet Venus or a weather balloon.  People who aren’t trained to carefully observe and think clearly are always making these kinds of mistakes.”

Every time we think we’ve got things figured out and can make pronouncements to one another without fear of someone making a counter-pronouncement back at us with any danger of validity this seems to happen.  Some smarty-pants academian digs around where he’s got no business being and spang finds something to cut us off at the knees.

In this instance it’s fairly solid physical evidence a Mayan city once thrived in the otherwise non-Mayan and feet-implanted-in-the-ground US state of Georgia.  The offending pointee-headed guy with the cheek to find it doesn’t even have the courtesy to be a US academian who can be bludgeoned by grant money and sneers from his peers to shut the hell up about it and not go around shaking and rattling previous pronouncements.

When evidence began to turn up of Mayan connections to the Georgia site, South African archeologist Johannes Loubser brought teams to the site who took soil samples and analyzed pottery shards which dated the site and indicated that it had been inhabited for many decades approximately 1000 years ago. The people who settled there were known as Itza Maya, a word that carried over into the Cherokee language of the region.

The city that is being uncovered there is believed to have been called Yupaha, which Spanish explorer Hernando de Soto searched for unsuccessfully in 1540. So far, archeologists have unearthed “at least 154 stone masonry walls for agricultural terraces, plus evidence of a sophisticated irrigation system and ruins of several other stone structures.” Much more may still be hidden underground.

UPDATE: Raw Story contacted another UGA Scientist, Dr. B. T. Thomas of the Department of Environmental Science, who indicated that, while it is unlikely that the Mayan people migrated en masse from Central America to settle in what is now the United States, he refused to characterize Thornton’s conclusions as “wrong,” stating that it is entirely possible that some Mayans and their descendants migrated north, bringing Mayan building and agricultural techniques to the Southeastern U.S. as they integrated with the existing indigenous people there.

He didn’t go on to say what needs saying.  Namely that the South African guy needs to go home and  tend his own affairs.  There’s plenty of digging to be done in Africa and plenty of good US academians capable of handling any digging needs doing here.  And most especially the South African guy needs to be kept away from the copper artifacts found in Florida and Georgia in other mounds that bear a strong similarity to Aztec artifacts in Mexico.

We don’t need any guys running around in pickup trucks drinking beer and talking about Mayan calendars.  Things are already complicated enough.

Which brings me to crowfoots and wobblehead extensions.  I borrowed Little Red yesterday and went into Kerrville.  I spent a goodly while hanging around in the AutoZone store picking the brains of guys in bib overalls with grease under their fingernails.

Those wobblehead extensions offer a new lease on life for the hope of getting the starter off the Communist Toyota.  The crowfoots might be helpful getting the new one back on.  Not pictured here, but also new to  the anti-Japanese engineering arsenal is a mirror that swivels at the end of a telescoping handle for looking into places nobody ever intended them to be looked into.