The Devil Take the Hindmost Religion of Human Progress

“Us.  You.  Me.  Niaid, Shiva, Tabby.  The Great Speckled Bird and the hens.  It’s coming on Christmas.  Why aren’t we gearing up?  Going on buying sprees?  Getting into the spirit of things?”

Christmas where the desert went and why

“Hmmm,” Hydrox frowns, scratching behind his ear.  “You’re thinking of what?  Maybe buying a few miles of lights and stringing them up?   Finding some ways of burning up some more kilowatt hours without warming the cabin, pumping water, creating anything, putting food on the table or adding anything necessary to things around here at all?”

I pulls at the suspenders to my insulated coveralls, stalling for time.  “Well, yeah.  Everyone else does it.  Remember when we lived in Placitas and the whole town got drunk and walked around the village singing?  Don’t you miss that?”

“I hated it,” Scrooge McHydrox mutters.  “So did the other cats.  Christmas.  Halloween.  Easter.  But especially Christmas.  Kids buzzing around the roads on new motorcycles trying to run one another over.  Garbage piled up around the pickup containers.  You humans are a mystery to me.  Can’t think of enough things to buy and throw away.

“But all the while yapyap yapping about how hard times are.  Yap yapping about the cost of just staying alive.  You humans don’t even know how to eat a pound of meat that didn’t come in half-pound of plastic.”

This raised my hackles a bit.  “We’re smart.  We’re on top of things.  Every one of those empty cat food cans in that barrel over there are a sign of human progress and intelligence.  Someone somewhere dug that ore out of the ground.  Someone else smelted it and rolled it down into sheets to make into cans to hold meat someone else grew and killed and butchered so you can have a full belly.

Hydrox glared at me in a way I like to think of as put-in-his-place.  “Yeah.  And who’s responsible for all that?”

“Human progress,” I replied proudly.  “The religion of I-Got-Mine.”

This is Zuni Salt Lake

It’s about forty miles south of the Zuni Rez, almost in AZ.

There’s a ghost town you can barely see in the pic…. used to be a considerable community down in there when it was private land, from the mid-1800s until the 1950s, evaporating salt from the huge concrete beds.  Most of the buildings are still intact, though they’re going away rapidly.

Today it belongs to the Zuni tribe, one section of land, but it’s not in the national trust as part of the Rez.  Tribes have been acquiring a lot of land from casino monies and other ways during the past decades, making the lands acquired ‘tribal’, but not Rez, which puts them into an interestingly ambiguous position insofar as road maintenance and county taxes. 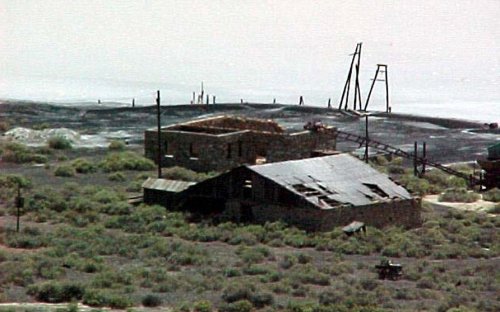 Salt Lake was acquired as a piece of a lawsuit against the US government involving an airplane with a hydrogen bomb aboard that crashed on the Rez, with first responders being Zunis, but which the feds didn’t bother telling them about the bomb, leaving emergency workers exposed to hazardous materials without knowing it.  The tribe got a few million out of that, which they used to purchase 60k acres of land to the south of the Rez, but Salt Lake was thrown in as a bonus.

Salt Lake’s a sacred place for the Zunis, home of Salt Mother.  If you are willing to risk hopping the fence and wandering around down there ….. it’s a volcano crater with a hollow secondary plug you can climb, then a spiral trail leading back down inside … that’s where most of the rituals for Salt Mother are held… but all over that section you’ll pass over various religious items from recent times you’d be well advised to leave untouched.

Salt Lake used to be the place all the warring tribes got their salt throughout history.  A place where a constant truce between enemy tribes existed.

It’s also part of what the power companies would love to strip mine.   The great percentage of the desert surrounding it, from north of Springerville, and Saint Johns, Arizona is government land with shallow coal deposits comparatively inexpensive to ‘recover’.  They’ve already converted the desert on the Arizona side to a wasteland.  Still desert, but more in the moonscape vein than the usual, regular arid country mode.

The people in El Paso and Phoenix need electricity so they can fire up their hair dryers every morning, and keep their homes refrigerated.   Those places have climates uncomfortable to the human skin most of the time and they’d rather savage a few million acres of country they’ve never visited and never will than suffer a few degrees of discomfort and use a towel to dry their hair.

Which the Zuni believe would thoroughly piss off Salt Mother, with considerable resulting pain for the Zunis, and all the rest of us.

The Zuni and a few commie-pinko-obstructionist greenie environmentalists are the only people who give a damn, and the other desert-dwellers in the area would welcome the jobs helping ravage the country around them would bring to the area.  The last time I looked the Zuni tribe was burning up a lot of tribal money trying to stop the mine expansion into New Mexico.  The prospects didn’t appear promising because the New Mexico government, the feds, and the mining interests were stacked up singing songs of human progress and greater good.

Heck, it’s been a few years now.  Maybe they’re already mining it.  Probably easier to ask someone in Phoenix or El Paso whether the hair dryer worked this morning and if it did, assume that desert has gone to the moon.