I’ll leave it to you to decide what’s strange about it. Cob-webs around here are the norm. Maybe it has something to do with the nuclear waste part of things. Old Jules

Got A Holiday Greeting From The Time Department

Hawaii Konate, the people who keep me posted on what time it wasn’t over the past while, what time they think it probably isn’t now, and what time they’re middling sure it won’t be in the future sent me a nice greeting by email. 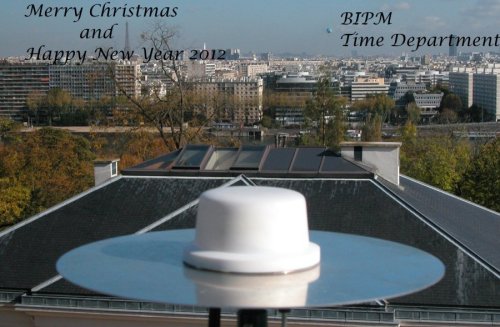 The card arrived in my hotmail email box at 3:25 AM someone’s time, maybe mine, maybe theirs, maybe hotmail’s.   I’m not sure whether that picture is of something at the Hawaii site, or whether it’s wherever they speak the language at the top of the circular they send out:  BUREAU INTERNATIONAL DES POIDS ET MESURES, ORGANISATION INTERGOUVERNEMENTALE DE LA CONVENTION DU METRE. [Muddy muddy muddy etcetera]

But even if I knew what time it wasn’t in that city where the place on the card isn’t, I still wouldn’t know what that thing is they sent me a picture of wishing me a Merry Christmas.

I generally don’t like people telling me what kind of Christmas to have, but especially I don’t like them telling me how to have a whole year.    But in this instance, they did let themselves be nailed down on the thorny issue 0f 2012.  2012, unless they’re being cunningly sarcastic, isn’t a time that won’t happen.

So maybe there was no authoritarian motive behind telling me what kinds of Christmas and 2012 to have.  Maybe they were being subtly reassuring.

I suppose it’s probably best not to try to second-guess them.