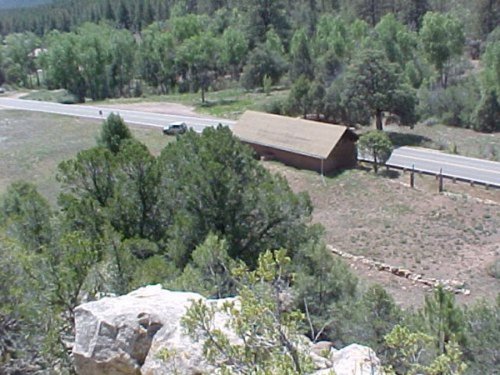 That roof you see down there covers the remains of Pidgeon’s ranch house.  Center point for most of the fighting during the battle of Glorietta Pass.  At the beginning of the battle Regular Union troops held the ridge where I was standing to take the picture and everything you can see beyond.  The rock face below me and to the right is dimpled by fire coming from below because the Union snipers were operating there.

The Texas artillery positions were outside camera range to the upper right.  The hottest fighting was along this ridge and below focused on the low wall between here and Pidgeon’s.

Texans flanked the Union position beyond the ranch house and overran the wall forcing the Federals into a hasty retreat beyond the far left of the picture, where they attempted to establish a new defense line, but the valley widened and doomed it to failure.

At that point the Texans had a straight shot all the way to Fort Union, their goal, with nothing to stop them besides a straggling of Federal troops in disorganized retreat.

But during the night the Colorado Volunteers trekked through the mountains to Coyote Canyon and attacked the Confederate supply train, burned and captured it.  Which completely reversed the fortunes of the Texas Mounted Volunteers.

Suddenly they found themselves without supplies and a long road back down the Rio Grande occupied by New Mexico Volunteers and Federal troops from Fort Craig which they’d bypassed during the hurry northward.

They buried a lot of their dead just below and to the right of the ridge above Pidgeon’s.  They were found during the 1980s by someone digging a foundation to a house down there, and taken to Santa Fe, beginning a decade-long fight over them between Texas and New Mexico.  But under New Mexico law those bodies belonged to the person who owned the property and found them.

Around 1992 they were buried with a lot of ceremony at the National Cemetery in Santa Fe.